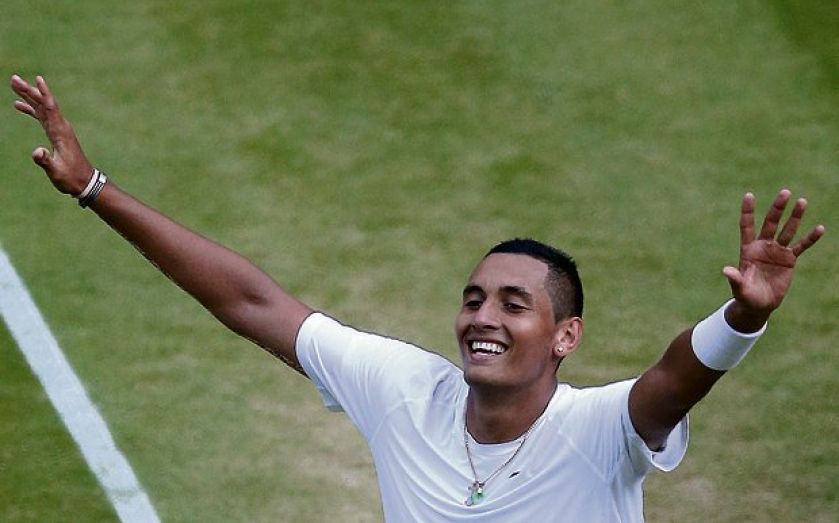 WIMBLEDON wildcard Nick Kyrgios hopes to have finally convinced his mum of his ability after causing one of the biggest shocks in grand slam history yesterday by dumping world No1 Rafael Nadal out in round four.

The 19-year-old Australian is ranked 144th in the world, had never beaten a player ranked in the world’s top 50 before arriving at Wimbledon, and was granted entry to this year’s championships only after winning a minor event in Nottingham.

But playing in only his second senior grand slam tournament, Kyrgios displayed a fearless attitude in seeing off Nadal – the second most successful player in the history of the men’s game – 7-6, 5-7, 7-6, 6-3.

Kyrgios said: “I was reading a comment that she [his mum] thought Rafa was too good for me. It actually made me a bit angry. [From what she said] you would think he’s a whole other level compared to me. I’m going to text her a smiley face. It’s definitely been the best week of my life.”

The youngest player in this year’s men’s singles draw says he gets homesick easily, has brought his Xbox video game console with him to wind down between matches and describes himself as “just a normal kid.”

As a 13-year-old he watched his idol Nadal win his first Wimbledon title and fifth grand slam in total. But Kyrgios was far from overawed on Centre Court, hitting 70 winners and serving 37 aces on his way to the biggest win of his career.

Nadal had a word of warning for Kyrgios, guaranteed to rise to at least 65th in the world rankings, that the hard work begins now, however.

He said: “The sport is a mental part a lot of times. He has positive things to be able to be a good player. But everything is a little bit easier when you are arriving. Everything is new. Nothing to lose. Everything is positive.

“When you are there yourself, the rest of the people start to see the negative things on your tennis. We’ll see if he’s able to improve and to play at a very high level for a long period of time. I wish him all the best.”

Swiss stars Roger Federer and Stan Wawrinka won in straight sets and there was progress too for No8 seed Milos Raonic, Kyrgios’s next opponent.