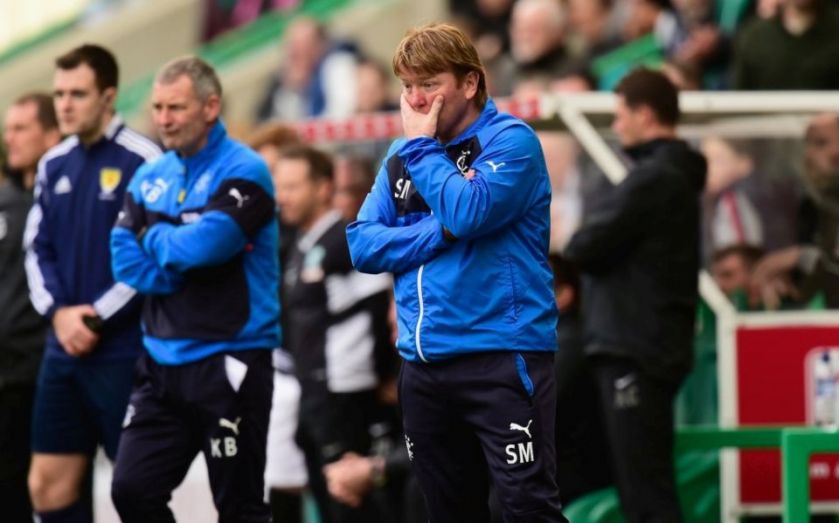 Rangers' miserable 6-1 reversal to Motherwell on Sunday means the Glasgow giants have failed to win promotion for first time since the new Rangers company re-started life in the third division in 2012, and will play outside of the Scottish Premier League for at least another season.

For new Rangers chairman Dave King, the result could require financial manoeuvring and significant personal investment to keep the club going for another year in the Championship.

After writing a distress report into Scottish football earlier this year Ken Pattullo, partner at business rescue specialists Begbies Taylor, said Rangers failure to win promotion back to the Scottish Premier League would be "pretty horrendous".

Yet thanks to King's installation at Ibrox in the intervening period, things aren't looking as grim as they once were.

"The outlook for Rangers is a lot more positive now than it was six months ago", explains Pattullo. "King has Rangers' best interests at heart as indeed do all the present people in charge which is certainly not something that could have been said honestly of previous people who have come along in the last few years. Crucially, he also seems to have money as well."

Rangers now have a crucial couple of months ahead of them – here's what King and co can do to put the club back on track.

King has talked big with promises of £20m – £30m investment to bring Rangers back on a par with rivals Celtic, but the solution to securing success isn't as simple as increasing the size of the paycheques on offer.
Rangers had the oldest average age of any club in the Scottish Championship last season. On Sunday, Stuart McCall's team included four players over 30 and just three under 25 – two of whom have since finished loan spells and returned to Newcastle. A strike pairing of Kenny Miller and Kris Boyd may induce halcyon-tinged nostalgia, but could be better replaced by hungry players eager to impress.
In doing so, says Pattullo, Rangers could take note of how other Scottish clubs have managed with the reduced TV revenues their absence from the top flight has caused: "In terms of actual transfer fees paid out there have been next to none in Scotland. Scottish football has had to invest in youth."

Bring the fans back onside

It's absoblutely vital Rangers sell as many seasons ticket as possible. That gives them enough money as a starting point and minimises the amount Dave King and other investors will have to pump into the club to keep it going.

As dissatisfaction and frustration with Rangers directors Derek Llambias and the Leach brothers grew, season ticket sales and matchday attendance dwindled. Ticketing revenue fell by £0.7m in the 2013/14 season as the total season tickets sold fell by over 2,000. Reports suggest that figures for the most recent campaign are likely to be even more damaging.

With McCall's contract set to expire, Rangers are on the hunt for a new man to lead next season's promotion charge with former Brentford boss Mark Warburton the bookies' favourite.

A former city trader, Warburton could be the ideal candidate to oversee some smart summer recruitment and a younger squad.

Rangers' merchandising operation is in good health, with revenue quadrupling last year to £4.8m. Unfortunately, most of that money ended up in the pockets of Mike Ashley not on a promotion push. Ashley is the "ultimate controlling party" of Rangers Retail – a separate entity to the football club – and is in possession of retail and trademarks secured on a £5m loan he is now asking to be repaid.

The two parties will meet in a general meeting next month, at which King and co have proposed a resolution that Rangers is released from its arrangements with Sports Direct. They will hope to prove that the deal was arranged while Ashley was in breach of the Scottish Football Association's dual ownership rules.