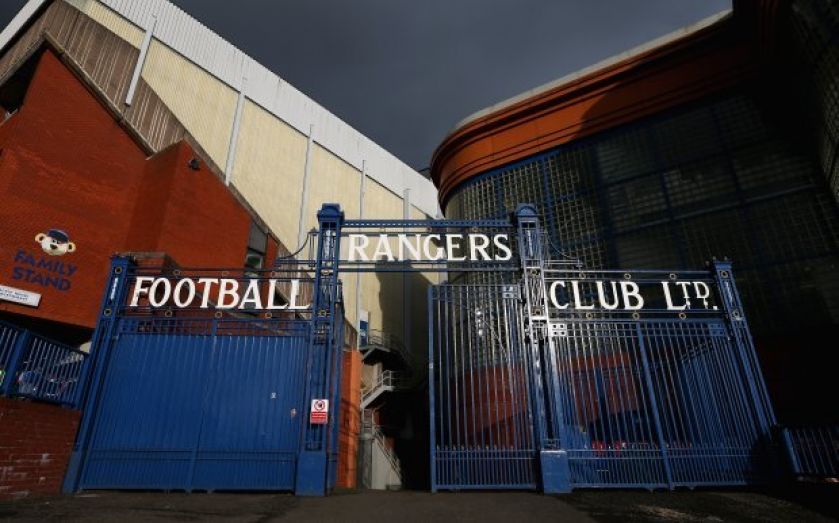 The board of Rangers football club is considering two offers from existing shareholders to help rescue the Scottish club from financial difficulties.

The club has also admitted that its stadium, Ibrox, could potentially be used as security on any financing, despite previously insisting it would not be used on a loan.

“At the current time the assets (other than Ibrox), cash flow and business of Rangers does not support a significant financing, on an open market commercial basis, to achieve the goals which the directors have set for the Club,” it said in a statement this morning.

“Accordingly the directors are pursuing bilateral discussions with two parties who are both stakeholders in Rangers. These discussions contemplate a significant amount of capital being available to the business on a long-term basis in order to enhance the squad which the directors believe is necessary. A consequence of funding to this level is that, in reality, it may be necessary to use Ibrox stadium as security; such a decision would not be taken lightly,” the board continued.

Sports Direct and Newcastle United owner Mike Ashley offered a £10m loan to the club last week in return for security on the stadium. Ashley already holds a 8.9 per cent stake in the club. Following the offer, the Rangers board lodged advance notices of security against the stadium on behalf of Ashley’s Sports Direct. This means no one else can be granted securities on the properties for 35 days.

Hundreds of Rangers fans gathered at Ibrox on Friday to protest against the board and Ashley over the loan.

Another offer was reportedly made by the Three Bears consortium, also asking for security against Rangers training ground Murray Park as well as two seats on the board, according to the BBC.

An offer by American businessman and Phoenix Suns owner Robert Sarver of £20m for a controlling stake in the club was rejected by the board.

The board said: “Over the past few weeks the Company has held discussions with a number of parties with a view to finding a stable financial future for the business. The discussions which have been wide ranging including, both stakeholders and third parties, are with a view to achieving the best possible terms for the business. Without the authority to issue equity on a non pre-emptive basis, the directors cannot issue shares in the timeframe required."

Dave King, a 15 per cent shareholder in the club, has called for a general meeting to to remove all four directors of the club from the Rangers board,  David Somers, Derek Llambias, Barry Leach and James Easdale.

The board said it will seek to “have such notice withdrawn in order to avoid the cost and disruption of an ad hoc general meeting”.

If the notice is not withdrawn, the directors will recommend to shareholders to vote against the proposal.