Putin will fail in Syria: The West must take a step back 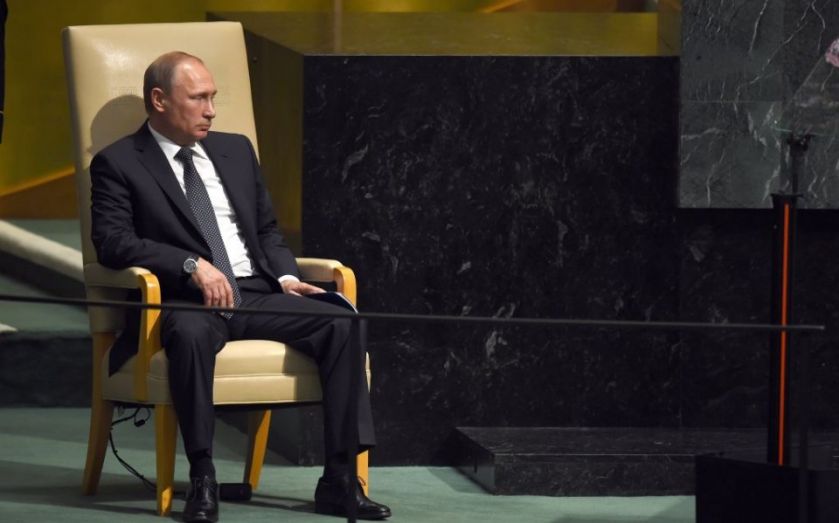 I feel as if we are in a time warp. To read right-wing commentators over the past few days, you would think the Cold War is back on – only this time we are losing. To hear them talk, we are living in a new age of Russian power. A triumphant Russia is calling the shots in Syria, while an impotent White House is sidelined. All this hyperbole rests on the deeply flawed notion that Putin knows what he is doing in the Middle East.
The odds are that he does not. And the Russian President’s policy toward Syria will soon be seen for what it is: a catastrophic blunder of the first order.
How can I say this in the face of Putin’s decisive action that – in contrast to the West’s dithering – has so quickly changed the game in Syria? The simple answer is that, from the hard experience of working in Washington, I am less overawed than Britain’s right-wing commentariat by military wherewithal than I am fearful of the hubris of those  who use it.
Let’s start with a rational evaluation of Putin’s gambit. It is surely not a sign of Russian strength, but rather of Russian weakness. When asked in late September by the American news programme 60 Minutes if the real motivation behind bombing rebel targets was not to destroy Isis, but to boost Assad by taking out other rebel groups threatening his hold on the western coast of the country, the Russian president answered forthrightly, “well, you’re right”.
Read more: The West’s failed Syria policy: Why it’s time to do nothing
Putin’s defensive motivations could not be clearer. With Assad – his last ally in the region – beginning to see the fortunes of war turn against him, Putin felt he had to act – both to protect the important Russian naval base at Tartus (their only naval toehold outside of the former Soviet space) and to bolster the government’s fading dominance over their sliver of Syria.
Critically, if Assad is ousted, Putin has seen to it that Russia will have a stake in whoever his successor on the Syrian coast might be – a defensive ploy to safeguard the little in the region that he has going for him. This does not portend a new age of Russian power; rather, it is a desperate effort to see off Russia’s geostrategic irrelevance in the Middle East.
Moreover, any hopes of doing otherwise – of expanding Assad’s zone of control through a combination of Russian air strikes and Iranian boots on the ground (either through the use of proxy Hezbollah or Revolutionary Guards troops) is doomed to failure. Assad’s murderousness has seen to that. His butchery means that the majority Sunni population in Syria will never meekly accept his continued rule over them.
The only real world alternatives are either military conquest of some Sunni territory and an endless occupation. This would be prohibitively costly, and something both Iran and Russia can ill afford. Or, merely settling for endlessly subsidising Assad’s Alawite rump state – also quite expensive. In either case, the Russian intervention is not going to change the basic strategic nature of the Syrian civil war.
Read more: Is it time that the West put boots on the ground in Syria?
Western right-wing commentators miss the key point that has also eluded the Russian president; they have forgotten their Clausewitz: to be successful, military force is merely a tool of political goals. Putin has – much as America lost the plot in Iraq – entirely ignored the central political ethno-religious building blocs that comprise Syria. It is a majority Sunni country. In the end, true peace will only come to Syria when the Sunnis acquiesce in who will be running the country. This is at base a political problem, not a military one. Ignoring this reality is bound to lead to abysmal failure.
For example, a seemingly obvious rule of thumb in the region is to never fulfil Isis’s fantasies. The barbarians in Raqqa have long proclaimed to their followers that Christians and Shia would conspire against the majority Sunnis in Syria, trying to upend the paradise that is the caliphate. And what are Christian Russia and Shia Iran now doing? Confirming Isis’s fevered predictions. Rest assured that this will be a boon for their deadly recruitment.
Bottom line: either the Kremlin will vanquish Isis, or  – and this is far more likely – it will fail catastrophically to do so. Both outcomes are just fine, given western interests. It reminds me of the Israeli view of the brutal Iran-Iraq war of the 1980s, in which it sold weapons to both sides. Given the hellish choice of either supporting Assad and Russia or Isis, the West ought to do neither.