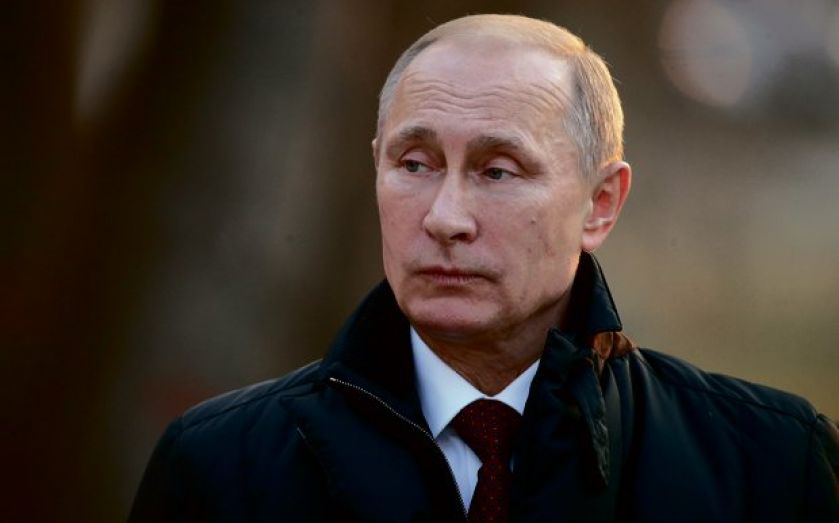 VLADIMIR Putin is surely receiving his long-awaited comeuppance, as his country struggles to deal with a full-blown currency rout, driven by plunging oil prices. For if the US and Saudi Arabia are indeed in cahoots to drive down the price of oil to smite their Russian enemy, as I have previously posited, one must admit they are good; very, very, good. Certainly, the Saudis seem content to let the price of Brent crude fall off the map without propping it up. Yesterday, it slid to $58.91 a barrel, putting it below $59 for the first time since May 2009. Since June of this year, oil prices have tumbled by nearly half, with the oil weapon wreaking havoc.

While others, like terminally mismanaged Venezuela, are also feeling the pain from this precipitous decline, the first and most vulnerable target is Moscow. Putin is wearing a bull’s eye around his neck, as far as the Saudis and Americans are concerned, due to his annexation of Crimea, brutal adventurism in Ukraine, and steadfast support for the murderous Assad regime in Syria. And by allowing oil to slide, at last his adversaries have handed the seemingly untouchable Russian President a butcher bill for his actions.

Even before the present rouble crisis, Russian finance minister Anton Siluanov forthrightly stated that western economic sanctions – imposed over Ukraine – would cost the economy around $40bn per year, with the falling oil price accounting for another $100bn loss. And Putin only recently signed the Russian Federal budget for the next three years, basing his spending plans on an oil price of around $100 a barrel. The Russian Central Bank estimates that the economy as a whole stands to shrink by up to 4.7 per cent next year if the oil price remains at $60. As oil and gas account for an overwhelming 70 per cent of the country’s exports, this truly is the golden stake aimed straight at the Russian vampire’s heart. And if oil falls as low as $40 per barrel, as the United Arab Emirates’ energy minister recently suggested could happen, the results could be truly calamitous for Russia.

But the Saudis – economically powerful as they are – could not put the squeeze on the Kremlin alone. America’s shale revolution has given the US yet another geopolitical weapon. By the end of November 2014, US oil production had expanded to 9.08m barrels per day, the fastest rate the country has seen since 1983, at the height of the Reagan boom. By coming from nowhere to emerge as a co-equal of the Saudis in terms of production, the Americans have triggered the saturation of the oil market, just as the Saudis have refused to mitigate these effects. It is this one-two punch that now threatens the very survival of the Kremlin.

For things are moving quickly. At the minimum, the Saudi-American cabal – when tied to the West’s in-the-end forceful enough sanctions – have exposed Russia to a world of hurt.

Elvira Nabiullina, head of the Russian Central Bank, has made the startling pronouncement that Russians should get used to a new way of life; presumably a state of being not as comfortable as before. With the rouble having lost half its value since 2014 began, and with the central bank jacking interest rates up to a killing 17 per cent not seeming to do the trick, she is surely correct. Whether political change follows this economic calamity must now also be open to question.