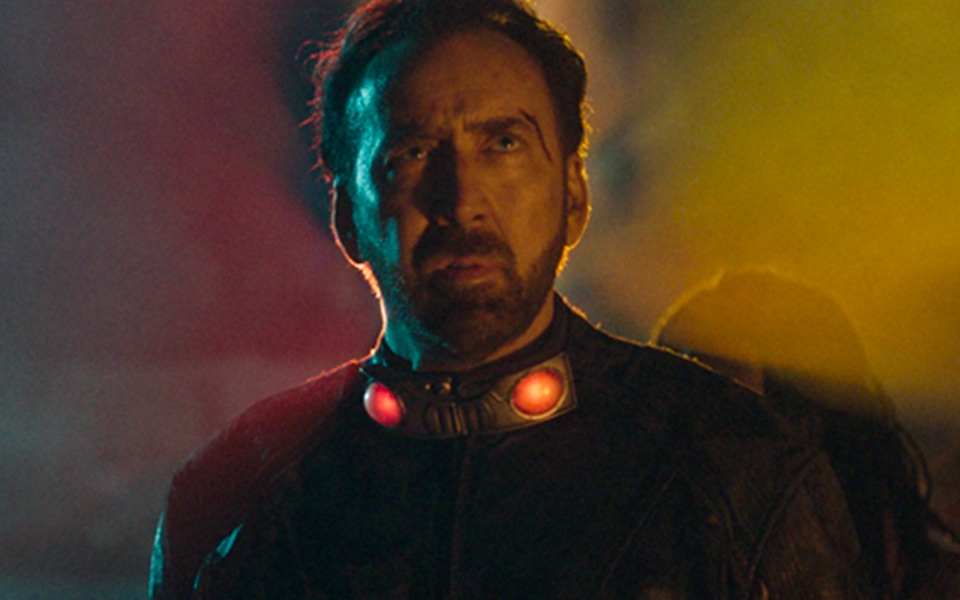 The poster for Prisoners of The Ghostland features a surprising quote – not from a critic or an enthusiastic viewer, but from the star Nicolas Cage himself, who calls it “The Wildest Movie I’ve Ever Made”. When you consider some of the offbeat choices the Oscar winner has made, that’s a powerful claim.

He plays Hero, a convicted criminal who is tasked by a ruthless Governor (Bill Moseley) to venture into a supernatural realm known as Ghostland to rescue his granddaughter Bernice (Sofia Boutella). Wearing a suit that will blow him up if he fails certain requirements, Hero enters Ghostland and finds Bernice. He discovers there is more to Ghostland, and Bernice’s relationship with The Governor, meaning Hero is going to have to live up to his name if he is to get out alive.

After an initial and lengthy explainer of his mission, Cage grabs a shopping bicycle and peddles off into the distance, in a suit that contains explosive charges positioned by each of his testicles. This profoundly odd image is only the tip of the iceberg in a film that prides itself on resembling a fever dream. Like a hybrid of Mad Max and various Terry Gilliam films, Japanese director Sion Sono offers remarkable visuals that jam together genres like a crazed ice cream sundae. Elements of westerns, science fiction, and fantasy all gleefully bounce off of each other, and while Prisoners of The Ghostland’s confused nature certainly seems to be deliberate, it comes at the expense of the plot. The story never seems to know where it’s going, or why, other than to bring us to another surreal or violent moment.

Sono’s subversive vision seems perfectly aligned with Cage, who is no stranger to losing his mind. He’s been in so many bizarre setups that there hardly seems any point in questioning why he looks so different to everyone else on screen, with viewers best advised to follow his lead and just go with it. The patented Nicolas Cage freak-outs are also something we’re used to, and to his credit he gives it everything he’s got – screaming “Ki-fucking-ai” to the locals while standing in a karate stance, and screaming while holding severed genitalia. It’s not enough to sustain a film, however, and eventually the whole endeavour seems like too many disparate ideas thrown at the wall.

Prisoners of The Ghostland will certainly have an audience, but throwing away the rulebook is only impressive if there’s something to replace it with. For all Sono and Cage’s enthusiasm, the end result is just too messy.