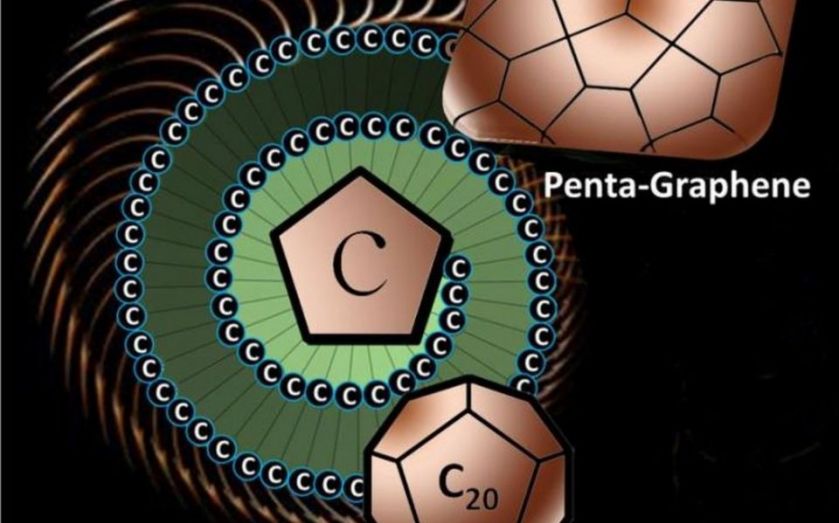 It is incredibly strong, mechanically stable and capable of withstanding extremely high temperatures.
Penta-graphene is the latest super-material to be simulated by scientists, and it could prove to be even more useful than graphene – the carbon-based super-conductor whose strength and flexibility have caused a stir ever since it was discovered in 2004.
Just like graphene, the new material is made of a single layer of carbon atoms. But within that layer the atoms are arranged in a slightly different structure – in graphene they form mostly hexagonal building blocks interspersed with some pentagons, whereas in penta-graphene the building blocks are all pentagon-shaped.
The initial idea for penta-graphene didn't come from a lab as you might expect – it came from the streets of Cairo.
Qian Wang, a professor at Peking University in Beijing, was eating wither her husband at a restaurant in the Chinese capital when she noticed artwork on the wall depicting pentagon tiles from the streets of Cairo.
"I told my husband, "Come, see! This is a pattern composed only of pentagons,'" she said. "I took a picture and sent it to one of my students, and said, 'I think we can make this. It might be stable. But you must check it carefully.' He did, and it turned out that this structure is so beautiful yet also very simple."
It hasn't been created in real-life form yet – so far, scientists at Virginia Commonwealth University have only simulated it using computer modelling. But if it is taken from the virtual world to reality, it could have applications in electronics, biomedicine, nanotechnology and more.

The simulation suggests penta-graphene could outperform graphene in many ways, as it would be more mechanically stable, possess greater strength, and be capable of withstanding even higher temperatures.
The two materials would not always be adopted for the same technological purposes, however – unlike graphene, which is a full electrical conductor, penta-graphene is a semi-conductor and so wouldn't be used where fast transfer of electricity is required.
The way the material stretches is also highly unusual, according Wang: "If you stretch graphene, it will expand along the direction it is stretched, but contract along the perpendicular direction,” she explained.  "However, if you stretch penta-graphene, it will expand in both directions."

From simulation to reality

The main challenge ahead will be finding a way to actually build penta-graphene.
“Once you make it, it will be very stable. So the question becomes, how do you make it? Right now, the project is theoretical,” said the paper's senior author Puru Jena.
“It's based on computer modelling, but we believe in this prediction quite strongly. And once you make it, it will open up an entirely new branch of carbon science. Two-dimensional carbon made completely of pentagons has never been known.”