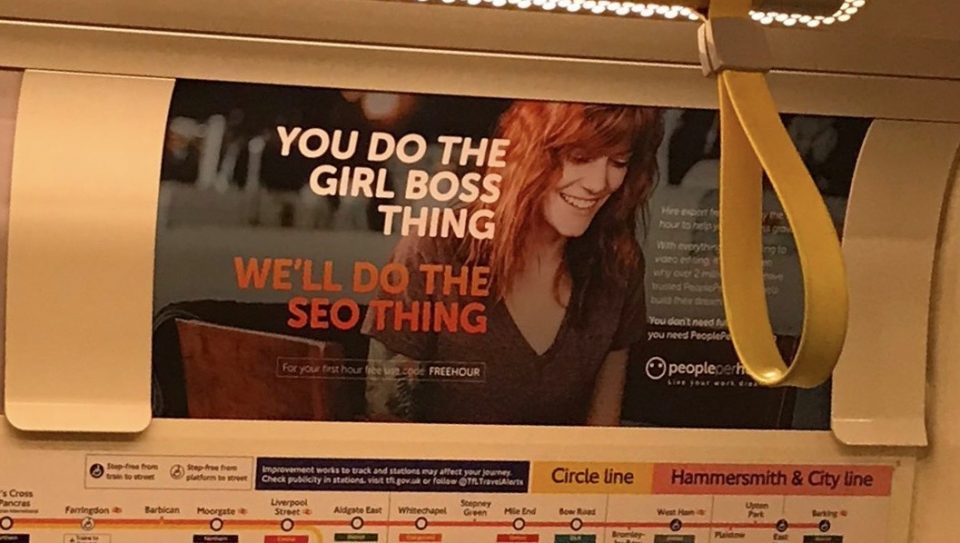 Moving around London’s transport network I recently clocked a poster ad for a freelancing company. The caption read: “You do the girl boss thing. We’ll do the SEO thing.” The orange of the first sentence matched the hair of the lackadaisical-looking woman in the photo. Call me a snowflake, but I was offended.

Maybe this is supposed to be ‘empowering’ women into business. I cannot see how it does that by using a ham fist like ‘girl boss’. Female CEOs won’t feel like CEOs if they cannot get past this stereotype. And that’s what it is. This is not an in-joke; it’s an advert that has been published because it thinks anyone who gets on that Tube will understand and get the reference. The marketing is trying to sell itself as friendly and on your side, but it is perpetuating a prejudice that precludes female from the sentence ‘accomplished business leader’, placing it the subconscious sexist holdall that prescribes a ditzy, lovable but ultimately unserious female manager.

I was further angered that this was signed off as appropriate material for a business to market itself with. They have made clear their target audience, young female entrepreneurs, and then chosen to patronise them in the crassest way possible. Any person seeing this would wonder why women can only be ‘girl boss’ and why a ‘girl boss’ is considered a joke version of the real thing. I can only assume she makes the tea.

We live in exciting times. More and more people of all ages are stepping into business roles, or taking on the responsibility of running a company. The barriers to access, in every sense, are coming down. I don’t just mean for startups, I mean for women, I mean for the socially disadvantaged, I mean for ethnic minorities, I mean for people with disabilities. Those victories have been slow, and they still need to be fought everywhere, every day.

That’s why, for all its apparent normality, the appointment of Roula Khalaf as the first female editor of the FT, which was announced yesterday, is such a milestone. I would like to ask those who came up with, and signed-off on, ‘girl boss’ what they think Roula’s, or any other successful woman’s reaction would be. Would they find it funny? Would it produce a wry smile? Or, as seems more likely to me, would it take every challenge they’ve faced, every hurdle they’ve overcome, every stereotype they’ve devised, and throw it back at them as if it didn’t matter?

I hope those individuals behind the ‘girl boss’ advert are embarrassed. Diversity is invaluable, and, here’s the important thing, it helps us all, not just those who have traditionally faced prejudice. Not checking your privilege can lead to offensive tropes being replicated again and again at all levels of society. They damage us consciously and unconsciously.

In 2019, trying to win business by gesturing around a negative stereotype is obscene, and that other unforgivable thing: lazy.