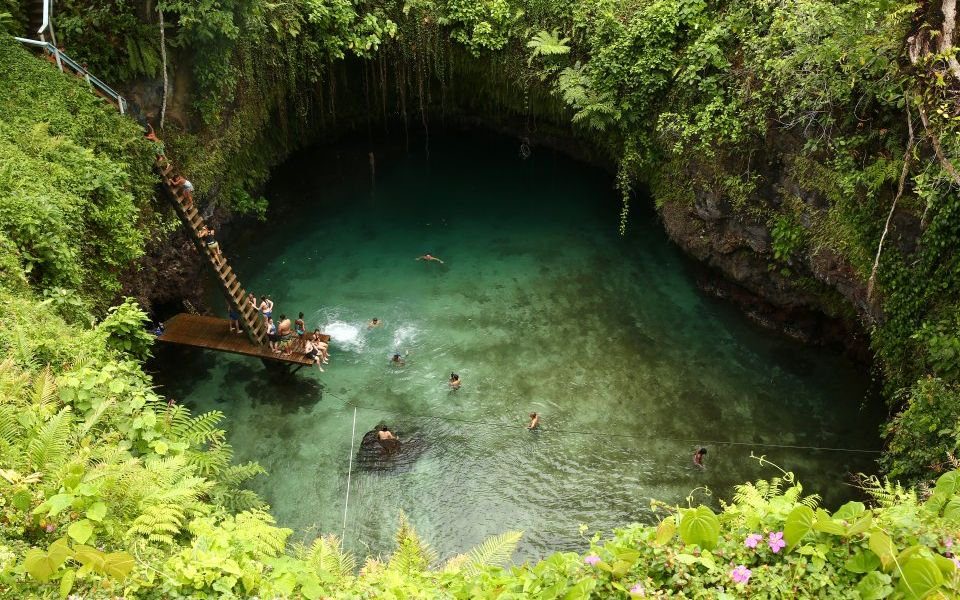 Samoa has one of the South Pacific’s most beautiful and varied coastlines, complemented by a lush mountainous interior.

An ideal island getaway, visitors here can pick and choose between paddling round kiddie pool lagoons of vast breadth but knee-high depth, to catching the spray off gargantuan waves crashing into craggy sea cliffs. Or both, because more often than not such lazy lagoons and hard-pounded precipices are just a few minutes drive apart, and surrounded on all sides by waterfalls, swimming holes, cave pools, white sand beaches and rainforest trails.

By all means, I heartily recommend visiting Samoa for the good times and lovely sights, but also for the back to basics joy of being there. Everything slowed to a soothing lull when I whiled away the better part of two weeks. Except for my pulse, that is, which quickened more than usual during my sometimes adventurous and always picturesque tour.

Samoa’s only actual city, Apia is a small but bustling port with a population of around 36,000 people. It served as a great base for me to revive after my outbound flight and to acclimate to island life.

For the first two nights of my trip, I stayed at Taumeasina Island Resort. Located on a small man-made island about five minutes drive from Apia and 45 minutes across town from the airport, everything I wanted to do around town was within easy reach.

As Samoa’s only commercial hub of any size, Apia’s buzzing open-air markets are among its most interesting attractions. Browsing Fugalei Fresh Produce Market provided the chance to chat with farmers and craftspeople while shopping for snacks and trinkets. Savalalo Flea Market was a bountiful stop for buying handicrafts such as woodcarvings and lavalavas (sarongs).

For lunch one day, I attended an authentic Samoan BBQ cooked in an umu (hot stone pit oven) at the Samoa Cultural Village, In town behind the Samoa Tourism Authority’s information centre, the simulated village offers free demonstrations of Samoan activities such as carving, weaving, and tapa making in addition to enlisting guests to help prepare an umu feast to be enjoyed watching a dance performance.

In the uplands outside of Apia is the former residence of Scottish author Robert Louis Stevenson. Famous for his many works, including Treasure Island, Stevenson moved to Samoa in 1889 and lived there with his family until he died in 1894 at the early age of 44 of what was thought to be a cerebral haemorrhage. Now a museum, my visit to his house and well-kept grounds with stunning ocean vistas was a highlight of my time in Apia.

Just a short drive from town (and close to Taumeasina), Palolo Deep Marine Reserve proved perfect for an afternoon spent snorkeling. When you go, expect to see loads of fish, a variety of corals and all sorts of small sea creatures in the reserve’s crystal clear waters. Decent gear can be hired for cheap but bring your own reef shoes if you don’t plan on using flippers.

The nation of Samoa is comprised of the westerly islands of the Samoan Archipelago. To the east is American Samoa, a US protectorate. The two largest islands in Samoa (the nation) are Upolu and Savai’i. Although Savai’i is considerably bigger, many more people live on Upolu, mostly in or near Apia. After a couple of restorative nights in Apia, I was keen to hit the road for Upolu’s southeastern coast.

At the island’s southeastern point is Lalomanu Beach. A long strand of white sand lined with beach huts, Lalomanu yields wistful views of small islands just out of reach. It’s an achingly idyllic spot for snorkeling, frolicking, or doing not much of anything but soaking up some rays.

Up the road from Lalomanu is To Sua Ocean Trench. The mother of all swimming holes, the trench consists of two seaside craters joined by lava tube. One is dry, but the other is 30m deep and filled with vivid blue tidal water from the ocean. Not for anyone with a fear of heights, but if you don’t mind the climb down (and back up) a very long ladder you’ll be rewarded with the chance to take an especially epic dip. It was without doubt the most fascinating place I’ve ever gone swimming.

A few more miles west along the coast is O Le Pupu Pu'e National Park. The main draw here is the short but spectacular cliff top coastal walk encompassing a pandanus (a palmlike tree) forest and expansive lava fields with surreal rock formations. The two-mile loop is a level and easy hike. Also inside the park and a quick drive from the coastal walk is Togitogiga Waterfall. I had a blast swimming here and seeing how high I could dare to jump from the bluffs facing Togitogiga’s pools.

While exploring Upolu’s southeastern coast, I kept Seabreeze Resort as my base. The small boutique resort was well placed for visiting many of the island’s most captivating sights. My villa, one of 11, was panoramically situated to take in a glorious ocean view from the outdoor hammock.

Though far bigger that Upolu, Savai’i is largely unpopulated and mostly wild with an amazing landscape and coastline. There are limited flights between Upolu and Savai’i, but the typical mode of transport is by regular ferry service, which is how I travelled back and forth. Samoa Shipping runs its ferry service between Mulifanua Wharf on Upolu to Saleloga Wharf on Savai’i from early morning to mid afternoon. Travel time is about an hour and a half.

Not quite an hour’s drive north along the coast from Saleloga Wharf, the Alofaaga Blowholes are a wondrous sight to behold.

Here, a local guide puts coconuts into holes along the outcropping of a lava field coast. When conditions are right (which they certainly were during my visit), waves surge under the outcrop to create a plume of water reaching up to 30m high. The coconuts get shot high into the air, and are often smashed to bits.

On Savai’i I stayed at Le Lagoto Resort & Spa on Savai’i’s north shore about 45 minutes from the wharf at Saleloga. With only 10 Samoan style bungalows spaced out along a lagoon protected by a lengthy reef, it was a great place to put the world on pause. I had a wonderful time kayaking around the lagoon, enjoying a delicious all-you-can-eat BBQ dinner with entertainment by local performers, and generally lounging about the beach and the pool.

Taking advantage of the manager’s invitation to visit the spa, an afternoon massage on my last day there ensured I was as chilled out as I could possibly be.

Just up the road from Le Lagoto, I stopped by Saleaula to see the devastation wrought by the Mt Matavanu volcanic eruptions of 1905 and 1911, including the ruins of two churches. This site is where the legendary Virgin’s Grave can be found. A small patch of land untouched by lava flow, it supposedly marks the spot where the chaste young daughter of a chief had been buried.

Even closer to Le Lagoto was Fagamalo Congregation Christian Church. Folks in Samoa are devoutly religious, so when I was invited to join a Sunday sermon it seemed like a good way to experience local culture. I had a lovely time seeing villagers come to church wearing their all-white Sunday finest and listening to the hymnals sung in Samoan. A fitting and warm send off from this wonderful island.

Air New Zealand flies to daily to Apia-Faleolo Airport from Heathrow via Auckland. For details go to airnewzealand.co.uk

Austravel is the leading UK-based travel specialist for creating tailor-made holidays to Australia, New Zealand and the South Pacific islands of Samoa, Fiji, French Polynesia and the Cook Islands. Find out more at austravel.com

For more about visiting Samoa check out samoa.travel