Tim Cook said “everything had changed” again when unveiling Apple’s new products earlier this week – but how were they received by the public? Looking at hundreds of thousands of social media mentions give us a pretty good clue of how people felt about the new iPhone, iPad Pro and Apple Watch.

Some 179,000 tweets posted on the #AppleEvent hashtag were analysed by Brandwatch, revealing that the biggest spike in interest had to do with another company entirely.

In a surprise twist, a Microsoft executive took part in the rival’s launch event, to present how the Office software would integrate with Apple’s iPad Pro.

When Microsoft took to the stage, the world took to their phones, tweeting madly. Some 2,065 tweets a minute were sent about it, more by far than any other part of the Apple launch. Even the revelation of the new iPad and iPhone models, which raised the second-biggest interest, fell far short. 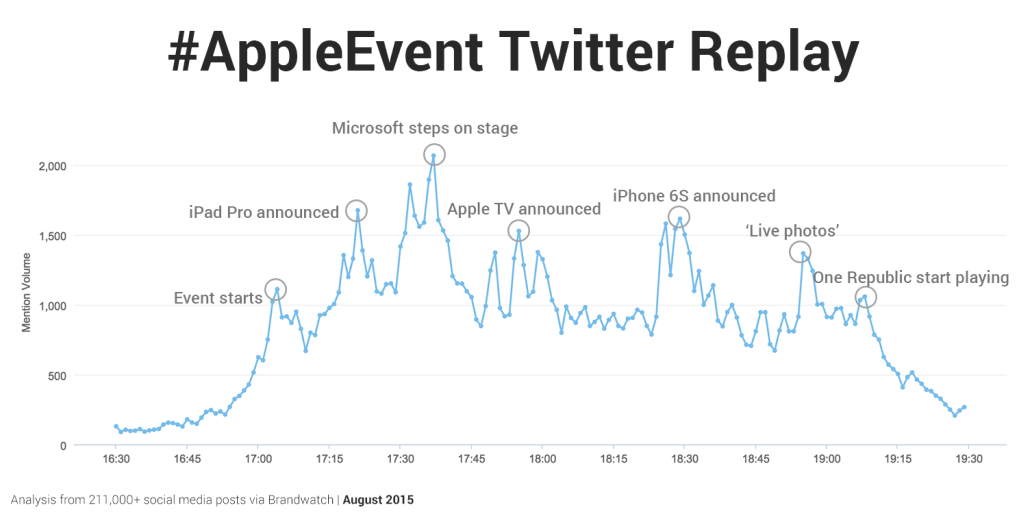 The launch followed weeks of mounting speculation about the exact details of what Apple would be unveiling, and although the company itself kept schtum as usual, most of the news had leaked pre-launch.

Most of the reactions to the products were overwhelmingly positive, according to sentiment analysis of the tweets which showed that reactions were almost always more than 80 per cent positive.

The most negative reactions came when Microsoft was on the stage.