Best of travel: Can hypnotherapy cure a chronic fear of flying? 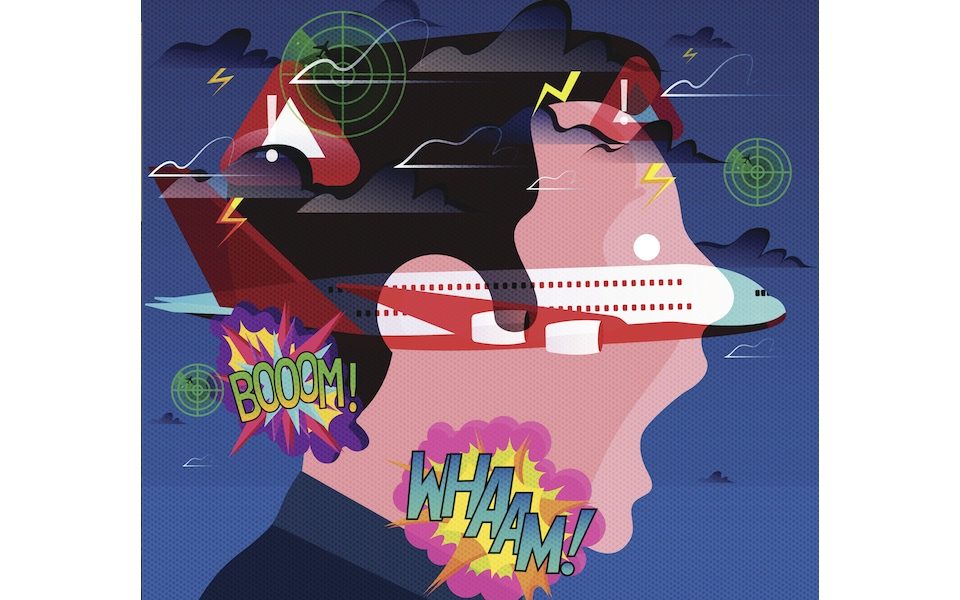 With the end of travel restrictions on the horizon, we’re republishing some of the best travel stories from the last few years. Today we revisit Dougie Gerrard’s article exploring the burgeoning industry trying to cure our fears of flying.

I haven’t always been an anxious person. In fact, I was an utterly fearless child, with a predilection for dumb and dangerous stunts, like doing somersaults off the roof of our garden shed. I can’t identify exactly when my outlook shifted, but somewhere in the crucible of puberty and secondary school a profoundly neurotic fear of illness and death wormed its way into my psyche.

I don’t somersault off sheds anymore, not since I discovered how fragile necks are. Every headache is now a potential aneurysm, every chest pain a myocardial infarction, and I once became briefly petrified that I had found a vast tumorous lump in my chest, only for it to turn out that I was actually fondling my rib.

My hypochondria is nothing, however, compared to the extremity of my fear of flying. I never enjoyed air-travel, but until three years ago I was able to grit my teeth and get through it without much complaint. I don’t know what changed, or why, but over the course of a summer what had previously been a minor neurosis suddenly metastasized into something wild and unmanageable.

Unfortunately, this happened just as I was preparing to begin a study abroad year in Austin, Texas. Over the next twelve months my aviophobia wreaked havoc: I missed around half a dozen flights, in the process running up a parental debt that I’ll probably be paying off for longer than my student loan. There are lots of tales I could regale you with from that year – the time I necked a whole bottle of St John’s Wort because I couldn’t find my Benzos, for instance – but for the sake of brevity I will limit myself to describing what I consider my magnum opus; a festival of stupidity and humiliation, spread across one ridiculous week in December.

It began during Thanksgiving, which I had arranged to spend in Seattle with a friend who was studying abroad in Vancouver. I missed my first flight – standard – but was able to get on one the following day, and spent a lovely week meandering around the Pacific Northwest. The real problem arose when my return flight left Seattle-Tacoma airport with me still lingering in the departure lounge. I was already exploring the outer edges of my student loan; if I booked and missed a third flight I wouldn’t have been able to afford my next term in Austin. My options almost exhausted, I booked the only remaining transport that would get me back in time for my exams: a sixty-six hour bus trip, taking me from the very top of America to a city close to its southernmost tip.

On the face of it, this doesn’t necessarily sound so bad – trace the route on Google Maps, and it could be a wicked West Coast road trip. But I didn’t have any friends with me, I didn’t have any hot food or wi-fi, and the intricacies of my bus schedule (six inhumanly tight changes) didn’t allow for any breaks longer than an hour. I had Candy Crush and a novel I’d just finished and one episode of Football Weekly. It was, unquestionably, the worst three days of my life.

Of all the flights I took that year, only one was free from anxiety or fear. It was my final return flight to the UK, and I was acutely aware that my visa was expiring in a few days’ time. Keen not to become an illegal immigrant in the US, I took what I will describe only as an inadvisably large amount of Xanax; far more than I’d taken on any previous flight.

Initially, it didn’t seem to be working. But as the plane took off, I felt a glorious calm descend upon me, as if I were being floated back to London on an enormous fluffy cloud. This is great, I thought to myself. I love flying. And then I passed out, having finally found the Xanax dosage strong enough to counteract the amount of adrenaline coursing through my body. I don’t know much about the rest of the journey, except that at some point I must’ve been given my in-flight meal, because I woke up with melon all down my front.

Unfortunately, ingesting a medically dangerous amount of Xanax is not a long-term solution, and my aviophobia has if anything worsened since I returned from the US two years ago. Lately, I have been finding this situation almost unbearable, and so in an effort to remedy it I recently arranged a hypnotherapy session with James Mallinson, who co-runs the enormously successful therapeutic programme Fix My Mind.

At the centre of James’ therapeutic approach is a technique called Havening, which involves crossing your arms as if warding off a vampire, and then rhythmically rubbing them while intoning the name of the phobic emotion you are trying to purge. There is a dual theory behind Havening: first, it is intended to simulate the sensation of being hugged, making you feel warm and fuzzy and releasing lovely comforting serotonin into your brain. It is also supposed to unlink the subject of the phobia from the attendant phobic emotions, allowing you to observe your fear from the outside (and, presumably, see how silly it really looks).

Initially, Havening didn’t seem to be affecting me much, and eventually I started to wonder whether I was doing it wrong. It was only towards the end of the session, when James briefly hypnotised me, that I began to feel it working. Ordinarily, thinking about flying makes me intensely nervous, but under hypnosis I was able apprehend the feeling of flight from a position of extraordinary calm. At James’ command, I would imagine myself on planes, but without simultaneously imagining them exploding or crashing into buildings. It was a strange, de-centering experience; I suddenly felt very far away from my body, as if I were peering at it through the wrong end of a telescope.

Because I haven’t flown since our session, I don’t yet know whether the hypnotherapy worked. I deeply, profoundly want it to have, though I find it difficult to check my scepticism, having been burnt so many times. For his part, James seems pretty confident that he’s fixed me, even offering a 50 per cent refund if it fails.

Even if I’m still unable to fly, having hypnotherapy did at least change how I think about my fear. The commonest refrain you hear about aviophobia is that it is illogical, the triumph of animal impulse over scientific rationality, but I’m no longer sure that’s entirely correct. It’s certainly true that you’re more likely to die falling out of your bed than on a plane, but stats like this don’t tell the whole story. As James pointed out to me, there is something profoundly, irreducibly weird about flying. It’s worth remembering that it’s only been a hundred-or-so years since the first successful flight; in little more than a century we have gone from gawping stupidly at the skies to hurtling through them at ridiculous speeds. Perhaps aviophobia is just our way of reckoning with the sheer psychic strangeness of this shift.

Ultimately, however, correctly understanding aviophobia isn’t especially important to me; the aim is to get rid of it, or at least to blunt it enough that I can always be confident of catching planes. There is a lot that I want to see in the world, and almost all of it requires flying. Plus, I’ve never been especially keen on Britain – I’ve always appreciated it most from a distance of a few thousand miles – and the idea that I will be marooned here for the rest of my stupid life is too depressing a prospect to bear. So let’s hope James has fixed me, and that Havening actually does work. But if you see a guy in the Heathrow departure lounge popping endless Xanax and furiously rubbing his arms, please be nice to him.