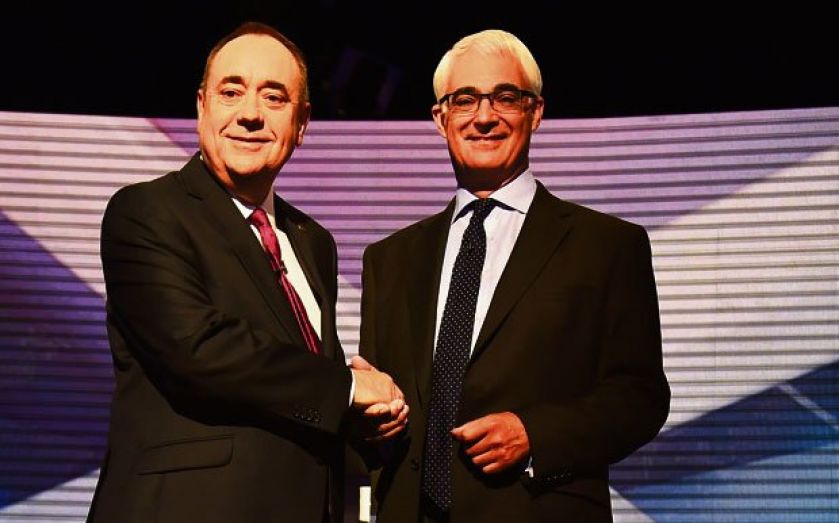 Alex Salmond and Alistair Darling are poised for their final public debate before voters decide the fate of Scotland on September 18 – this time on web forum Mumsnet.
The First Minister of Scotland and the leader of the Better Together campaign will draw swords on a live stream from 1:45pm today.
A recent poll on the site – seen as a key indicator of the female vote – showed 48 per cent of readers are for independence, 41 per cent are against and 11 per cent undecided. But who will win the mums over today?
Mumsnet users have been invited to pose questions – although given how popular the issue is, that offer is only open to those who have been members for more than 24 hours before the debate starts. Darling and Salmond will also be able to question and respond to the answers of each other.
City AM will be watching live and reporting on how each of the men fare and who wins the hearts and minds of this all-important demographic.
Before the debate starts questions – some hard-hitting, otherse complete with emojis – have already been posted by Mumsnetters.
Here is a sample of the ones we saw this morning:
Mr Salmond – you state that you would like a fairer and more equal country. How will you hope to achieve a fairer and more equal UK if you are not part of it, given that the current UK government does not appear to be influenced by the models of a fair and more equal society present in other countries?
Can you explain why we're "better together"? I haven't been able to findany concrete examples other than "we're bigger and can share the risk" – yet there are plenty of countries of similar (and smaller) population and GDP which are successful… I understand the "feeling British" argument – and indeed, in 1979 I would have voted No for that reason (as it was, my vote counted as a No as I was on the register but too young to vote

) – but not the wording "Better Together".
What will happen to my mortgage and the value of my property in the event of independence? These vital issues affecting ordinary voters have not really been addressed. And I am not a wealthy person, but an ordinary school teacher in a Scottish state school who has had enough to worry about this year with the massive pressure of Curriculum for Excellence.
Mr Darling, what's so different about the extra powers that the Westminster parties are offering in Gordon Brown's announcement today? what are these extra powers are being offered and what guarantees are there that these will come to be? or would offering any detail and guarantees actually legally break the purdah period set out by the Edinburgh agreement, instead of just morally? You are aware that postal votes have already been cast?
Question for AS: Both your preferred option of currency union and sterlingisation are incompatible with EU membership. Please explain your plans and proposals to ensure that Scotland is readmitted to the EU. We need a proper explanation, not just your assertion that Scotland will not leave the EU on secession from the UK as those assertions have been discredited by all credible sources.
Mr Salmond, the Scots and UK economy have both been weakened just by the mere suggestion that a Yes victory is now more likely. How can you reassure us that a Yes vote wouldn't throw the economy into immediate total jeopardy?
Q for AS – Are you going to accept a No vote graciously? Are you going to accept you were wrong, retire from politics and allow Scotland's fractured communities to heal themselves and live peacefully within the union?
PS I won't ask you about your currency plans for an independent Scotland as I realise you haven't thought about that properly yet..
Q for AD – Do you think it's fair that Scotland has more self determination, more rights AND enjoys the rights and responsibilities that come from being part of the union? Why can't Scotland just be part of the union on the same terms as the rest if us? It's wealthier than the North East and Cornwall and many other parts of the UK.
PS I'd like to congratulate you for running a civil and informative campaign. Please do keep giving lots of economic information?
Do you believe that a very close (say 51:49 split) simple majority is truly sufficient mandate for such far reaching and permanent constitutional change? Is it in Scotland's best future interests to take nearly half its population into independence against their wishes?
The "Better Together" campaign is rushing together promises of more powers for Scotland in the event of a No vote. However, English / rUK voters appear to be very unhappy about this – I have seen many newspaper headlines and MN threads calling for the Barnett formula to be scrapped, and Scottish public spending to be reduced in to rUK levels.
How will Westminster be able to deliver on these promises and mollify non-Scottish voters?
Question for Mr Salmond: What, in your opinion, is the best thing Yes voters could do in the next week to boost the outcome? I hope MN Towers has got in some Tunnocks caramel wafers for you 🙂
Share:
Tags: Scottish independence referendum