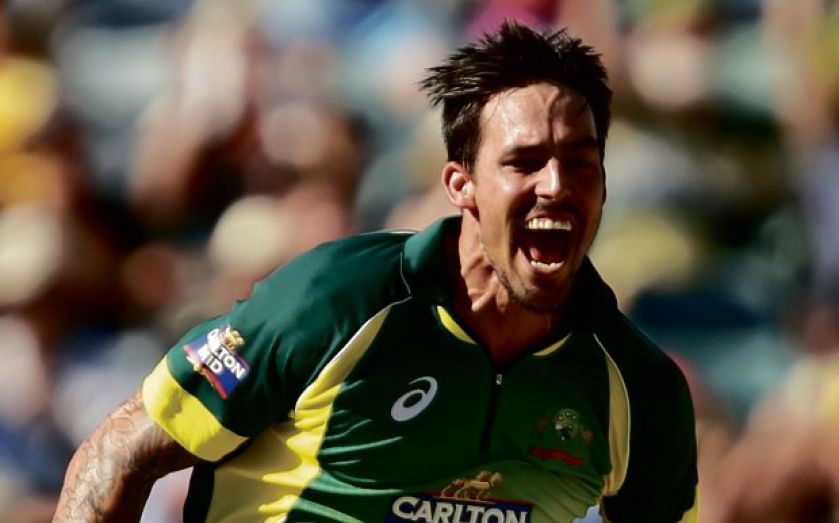 ENGLAND one-day skipper Eoin Morgan has urged his side to cast aside the disappointment of their 112-run thrashing to Australia in yesterday’s tri-series final and channel their energies into exacting World Cup revenge.

Australia recovered from 60-4 to amass 278-8, thanks largely to Glenn Maxwell’s 95 and half-centuries from Mitchell Marsh and James Faulkner. England seamer Stuart Broad took 3-55 and James Anderson 2-38, although all-rounder Chris Woakes suffered with the ball and returned figures of 0-89 from his 10-over allocation.

Chief tormentor Mitchell Johnson terrorised England again and ripped through the top order to post figures of 3-27 on his international return, while off-spinner Maxwell weighed in with 4-46 as the tourists slumped to 166 all out.

England now face warm-up matches against West Indies and Pakistan next week ahead of their World Cup curtain-raiser against Australia on 14 February, and Morgan insists the pressure to perform falls squarely on the hosts.

“We pushed the self-destruct button,” said Morgan. “Today will be hard to take but the test will be to come back from it.

“Huge credit goes to some of the guys and the individual performances they have put in. To earn a place in the final we have played some good cricket.

“We need to keep grafting and learning as we go along. For the three of four weeks we’ve been here we’ve made huge strides from where we were before.

“I think the pressure builds on Australia. They’re a home side in their first game of the World Cup, playing against a dangerous side. We’re going out all guns blazing so there’s no pressure from our point of view.”

England have now lost 13 of their last 15 one-day internationals against Australia on their rivals’ turf so the omens are not with them ahead of the clash at the Melbourne Cricket Ground in less than a fortnight.

Morgan himself has made scores of 0, 2 and 0 since his blistering century in the tri-series opener against Australia in Sydney and it was the batting in general which the 28-year-old cited as the root cause of England’s demise at the WACA – Ravi Bopara top scored with 33, while Moeen Ali, Joe Root and Broad made scores in the 20s.

“We didn’t help ourselves with some of the shots and some of the decisions that we made,” added Morgan. “The batting let us down.”