More and more pets are taking to the skies to join us abroad, but what happens to our four-legged friends when they fly? 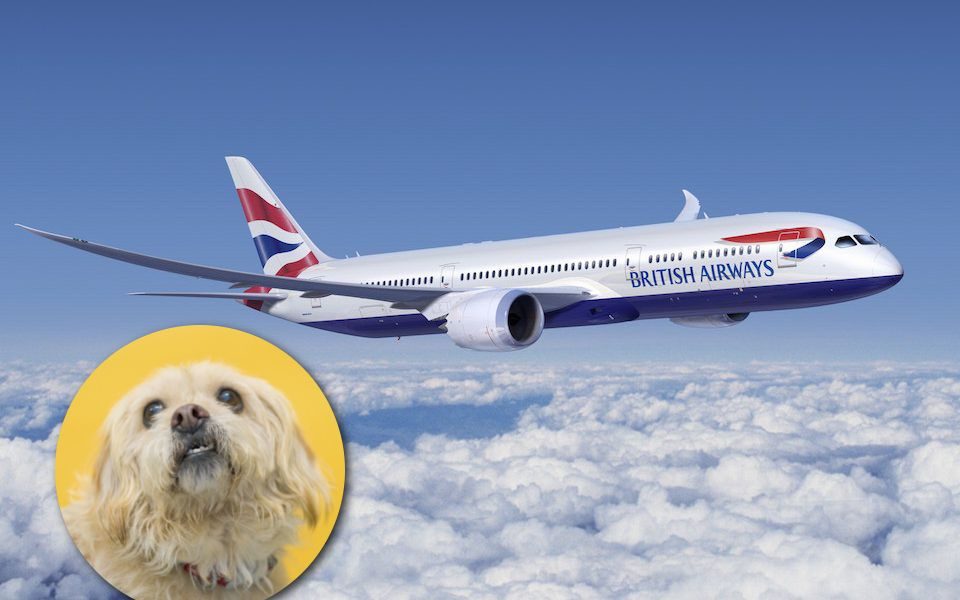 Air travel, it’s easy to forget, is arcane magic. We strap ourselves into big metal tubes to be voluntarily catapulted thousands of feet into the sky, a place where there’s free sour cream and onion flavoured pretzels and tiny bottles of vodka, and where we’re furious when the wifi doesn’t work.

It is only the complicity of delusion – the shared hallucination of several hundred passengers that watching Transformers: The Last Knight inside a cloud is somehow normal and fine – that prevents every flight from turning into a shrieking box of existential confusion.

Spare a thought, then, for how those pets lucky enough to travel the world with their owners must feel about the entire process. Hundreds of thousands of airborne pooches move freely around the European Union every year, aided by their very own blue passports. The Pets Travel Scheme, established in 2012, allows any cat, dog or ferret (the three animals that qualify) who meets certain requirements – primarily that they’re microchipped and have been vaccinated – to enter European countries without a lengthy stopover in quarantine. As such, air travel has become increasingly routine for the four-legged, and airports dedicate entire departments to their care and comfort.

“In September we had 207 dogs and cats, 31 assistance dogs, two guinea pigs, a pygmy slow loris, a tree kangaroo and a tortoise,” says Claire Beadle, manager of the Animal Reception Centre at Gatwick Airport. “And that’s just inbound.”

I had naively expected the place to resemble a scene from Jumanji, with leopards chasing border collies and ostriches holding boarding passes in their beaks. In truth, it was quiet when I arrived. The entrance to the facility, hidden somewhere inside the tarmac labyrinth surrounding the runway-side cargo complex, is marked by a large and friendly paw print above the door. It has the feel of the Battersea kennels, crossed with the liminal sense of an airport departure gate.

Alexandre the terrier was fresh off the plane from Portugal; Boris the pointer had flown in on the red-eye from Canada (Source: Greg Sigston)

“It does get very loud,” says Claire. “There are moments of frenzied activity. When the European flights land in the afternoon we see a lot of rescue dogs, especially from Cyprus where there are a lot of strays.”

Cages and crates line many of the walls. In one room a number of cats meowed plaintively. I poked my head in to say hello, and found not a moggie among their ranks. These cats were well-groomed, pink-nosed and long-haired, the class of kitty that’d likely be one day bequeathed the estate of their adoring owner, much to the anguish of her two warring sons. These were the kind of cats with more Avios points than the average person, and they appeared more relaxed about their upcoming flight than many humans.

We had a call from on board a Cuban flight. A tarantula had been spotted walking down the aisle of the plane

“We recommend that owners get the crate in advance,” says Claire. “If the dog or cat sleeps in the box in the weeks leading up to the flight, they’re a lot more relaxed about travelling.” The conditions of the area of the hold in which the animals travel are the same as those in the regular cabin, the air is heated and filtered, though they’re left to their own devices for the duration of the trip. To keep them company, owners will often leave a personal item in the crate with their pets, perhaps a blanket that smells of home for example, or in one particular case, a pair of the owner’s underpants. “We’ve had some strange requests. I remember we had one dog who was only allowed to drink bottled Evian water.”

It’s not only our pets who take to the skies. The centre oversees the safe transit of zoo animals, too, typically flown around the globe as part of international breeding programmes, and most often from Jersey and Edinburgh zoos. They see everything from tigers, flamingos and llamas down to lizards, spiders and leaf-cutter ants (the entire colony of which must be transported in one go).

Teddy had just flown in from Florence, and, boy, were his paws tired (Source: Greg Sigston)

“The biggest I’ve seen is a sea lion,” says Claire. But don’t they need to be kept near water? I ask. “I think they just dampened it a bit,” she says.

Stowaways are a common problem, too, especially on flights departing tropical countries. “You dread the call asking you to catch a scorpion or a spider,” says Claire. “We had a call from on board a Cuban flight. A tarantula had been spotted walking down the aisle of the plane, and it was my job to board the plane and get it. There was panic, and crew members were standing on seats. Luckily, by the time I’d arrived they’d managed to trap it in a jug. People go to the beach and put their bag down, and a lizard or an insect will climb inside. It happens more often than you’d think. I’ve had a lady open up her handbag and find a snake.”

Our chat is interrupted by some new arrivals. A shutter door clatters open and for a minute the peace of the centre is interrupted by the sounds of the busy airport outside. Two crates are placed on two trolleys, and a pair of shivering dogs are wheeled out of the cold and into the building. The staff scan their microchips and fill in forms as the dogs are moved into their individual kennels, where they have a bed and water. They pace about nervously, stopping occasionally to look into my eyes and woof confused, gentle woofs.

It’s hard not to feel sorry for them. They’re both Portuguese and have no idea what we’re saying. Even if they did, the most basic concepts of aviation would be beyond them. It will be a few hours until they see their owners again. Until then they are strangers in a strange land.

When reunited with their owners they can relax, and once again enjoy being one of the privileged few pets who join their owners on holiday.