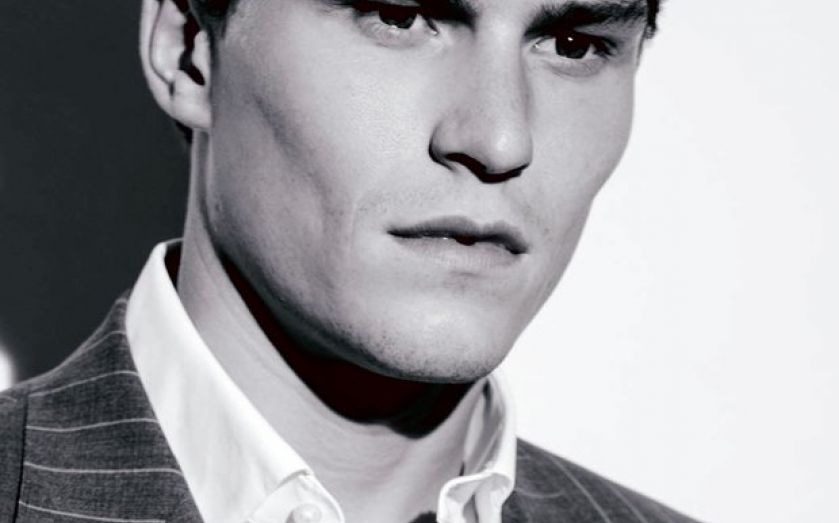 For Oliver Cheshire, London Collections: Men means the chance to brush shoulders with his heroes. “It was my first ever Hackett show. I was really excited because I love Hackett, but when I got there someone was in my seat. The person turned around and it was Samuel L Jackson. The girls with the clipboards were rushing around and didn’t know what to do. They obviously didn’t want to move him and I agreed: he’s Samuel L Jackson he can sit wherever he wants. In the end they just said, sit next to him, so I did, which was a highlight of the show. He told me how much he loves British tailoring; how cool is that?”

If you were ever in any doubt that being a male model is the best job in the world, spend half an hour with Cheshire. He loves it. And who could blame him? Travelling the world. Meeting Samuel L Jackson. Designer brands stumbling over themselves to give him free clothes. Not to mention the beautiful pop-star girlfriend (singer Pixie Lott). Even he can’t quite believe how lucky he is.

If he sounds like a normal boy plucked off the street, it’s because he is. The son of a fireman, he was spotted by a Select scout when he was 15. Within a year he was starring in a Calvin Klein campaign alongside modeling legend Natalia Vodianova. Since then he’s done campaigns for Vivienne Westwood, Paul Smith, Missoni, Dolce & Gabbana and high street brands such as Jack Wills, Gap and Marks & Spencer. This year he’s once again the face of M&S’s Best of British line.

He also took to the catwalk for the high street giant during last week’s London Collections. What does British style mean to him? “It’s all about tailoring. The Americans have always had sportswear, but we’ve done the smarter stuff really well. British style means the world to me. All countries have the thing they’re best at and ours is tailoring – British tailoring is the best in the world. And we’ve got a great heritage. We invented the Wellington boot and the brogue. We’re steeped in history and talent but we also tend to take risks. Just look at The Beatles.”

And according to Cheshire, there’s a buzz about London at the moment. London Collections was a great success once again, drawing journalists, actors and designers from all corners of the globe for a menswear extravaganza. “The figures are incredible. The amount of money Londoners spend on clothes is crazy. Bloggers and journalists now come from all over the world, with the likes of Moschino showing here. I love New York and Milan but London is my home, this is where I want to be.”

You can understand his appreciation for tailoring: the cheekbones, the elegant, calligraphic flicks of his golden hair, that jaw; in pictures, everything about him is sharp. In conversation, though, he’s the opposite: soft, open, affable. Out of that jutting jaw comes an unexpectedly high-pitched voice that still bears the rhythm and twang of his Hertfordshire home town. Like David Beckham, his features suggest a voice at least two octaves lower. Unlike Beckham, his charisma doesn’t collapse as soon as he opens his mouth. Instead, it’s endearing – a squeaky reminder that he’s still only 26.

It didn’t occur to the teenage Cheshire that he could be a model. “I originally wanted to be a fireman like my dad, but he said to me ‘don’t do it, there’s no money it!’ Originally, my family were more keen than I was.” Does his dad share his good looks? “I do look a bit like my dad but he’s had a harder life than me. As a fireman he’s spent all of his time pulling people out of burning buildings. I just try on clothes.”

Models aren’t paid for their opinions but Cheshire isn’t shy about expressing his. With a blog and a column in a national newspaper, his interest in clothes goes beyond how much he gets paid to be photographed in them. Was it always a hobby, even before he became a model?

“I always had the latest trainers and I used to pick out the loose threads in my tie and make sure it looked perfect, but I know a lot of people who do that… I always had an interest but it was when I started being dressed by other people, who made me put on things I wouldn’t normally wear, that I started developing my own opinions.”

One of the things he’s talked about is the way male modelling has changed. In the noughties, the fashion was for skinny, waif-like models. Now, thanks in part to David Gandy and his penchant for lying legs splayed and body glistening on a boat in the middle of a lake, there is greater demand for a manly, more muscular look.

“When I was younger I used to be skinnier, so I did stuff like that but now there’s more of an appetite for the American, 80s healthy look and as I got older I started to fill out so that suited me.” Cheshire’s abs are almost as famous as his cheek-bones. “I don’t really do weights because then I don’t fit into the clothes. I mainly stick to the prison yard work out, which is push ups sit ups and chin ups. And I go running a lot. Three or so times a week. I have to. If I don’t look after myself I don’t work. My body is my tool.”

It must be difficult to stay in shape when part of his job involves going to the right party every night – does he find it hard to abstain? “No, it’s okay as long as I stay off the beer. I can have other drinks but I know that if I’ve got a shoot in three days then I’ll take it easy. I’ll have a couple of beers at the weekends.”

Neither does Cheshire find it hard to resist the other temptations that accompany life on the London party scene. His relationship with Pixie Lott is stable, and above all, normal: “It’s just like any other relationship. We try and keep things as private as possible.” Does it get frustrating having to constantly be on the look out for pesky paps? “No, it’s fine, you just hop in a taxi and you’re away.”

Such professionalism has resulted in a rapid ascent to the top of a profession in which men rarely become stars. He is fast becoming one of the most recognizable male models in the world, second only to David Gandy in terms of profile and bankability. When he posed in swimwear for Marks & Spencer, sales went up 50 per cent. Superdry also reported a spike in sales after their campaign with Cheshire, leading many to dub him the “model with the Midas touch”.

Like Gandy, he moves seamlessly between designer and high street, but which does he prefer? “It depends on the shoot really, if they give you a character or a role to play, that’s what I really like. For example, I might be doing Belstaff, and I’ll get to be a biker for a day. Or like a Talented Mr Ripley kind of shoot. They’re the ones I really enjoy, instead of ones where you’ve got to wear 20 pairs of trousers in one day. But that’s our bread and butter… It’s cooler when you get a theme to work with that’s quite fun. I like acting. I still study it and one day I hope to pick it up again properly.”

Is he keen to prove he’s more than just a pretty face? “Things are changing. There are people like David Gandy and Kate Moss who design clothes and write for very credible newspapers. We’re starting to have a voice, people expect us to say something rather than just look half decent in photos, which, ultimately, is what it boils down to.”