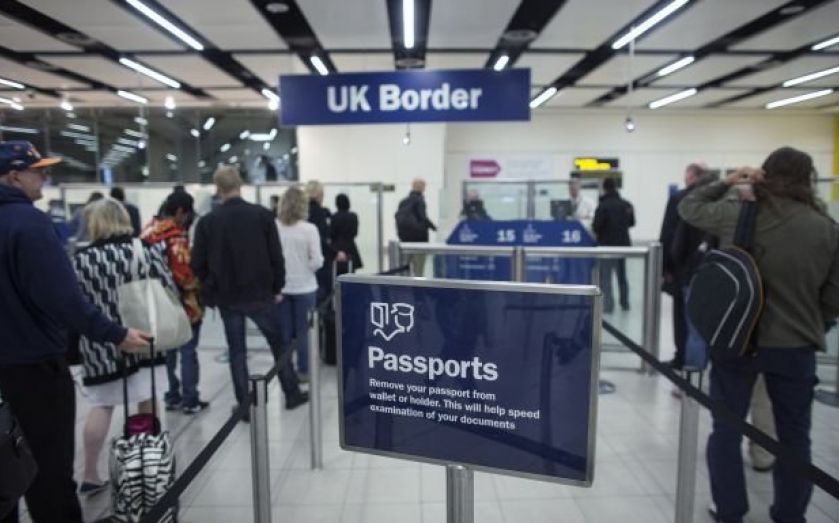 Net migration to the UK soared by 243,000 in the past year, figures from the Office for National Statistics (ONS) show.
Between 2013 and 2014, immigration rose from 492,000 to 560,000, while emigration remained stable at 316,000. The result was net migration of 243,000 for the twelve months to March 2014, up from 175,000 during the previous twelve months.
However, while net migration has increased from a low of 154,000 in the year ending September 2012, it remains below its 320,000 peak in the year ending June 2005.
The graph below shows how immigration into the UK has been greater than emigration from the UK every year since 1993, and that the difference between the two is growing.
Who is migrating to the UK?
Recent increases in net migration have been driven by a rise in net migration of citizens from the rest of the European Union (EU).
During the twelve months to March 2014, 131,000 EU citizens moved to the UK, compared with 95,000 during the previous year.
This means EU citizens made up almost half of all migrants to the UK in 2014, with only a slightly higher number of non-EU citizens coming in. In previous years, the difference between the two has been more significant, indicating a gradual narrowing of the gap.

When broken down by country, by far the largest group of adult migrants came from Poland during the twelve months to June 2014. Over 91,000 Polish nationals registered new national insurance numbers in the UK during that time (a good measure of migration), which constitutes almost a sixth of the total 560,000 migrants.

According to the ONS, immigration for study was a major cause of the overall increase in net migration, reflecting the higher level of university sponsored applications. The number of study visas granted rose by a seven per cent in the year ending June 2014.