More directors are being disqualified after their companies collapse, but the insolvency specialist Zolfo Cooper has warned that not enough execs are being banned for misconduct.

The restructuring specialist said 235 directors were disqualified in the last three months of 2013, up from 181 in the previous quarter.

85 per cent of those banned were men, meaning they are over-represented when it comes to disqualifications, given 75 per cent of all directors are male.

The average ban was 5.6 years 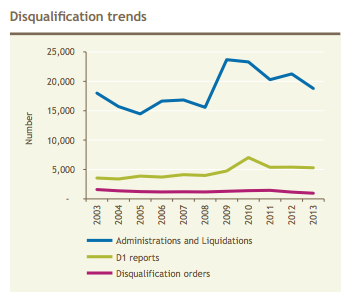 More interestingly, Zolfo Cooper reckons the number of D1 reports – which are used by insolvency practitioners to alert the Insolvency Service to misconduct – continues to rise, while not resulting in many more disqualifications.

“Overall, the number of disqualifications being obtained has fallen which is at odds with the message that disqualification is at the forefront of the covernment’s approach to promoting corporate governance, the protection of the UK’s legitimate business community and the reduction of harm against the Crown and customers,” the firm concluded.

Despite Vince Cable’s pledge to crack down on directors who fail in their duties, the business, innovation and skills select committee has warned repeatedly that the Insolvency Service does not have enough manpower or funding to handle its caseload.