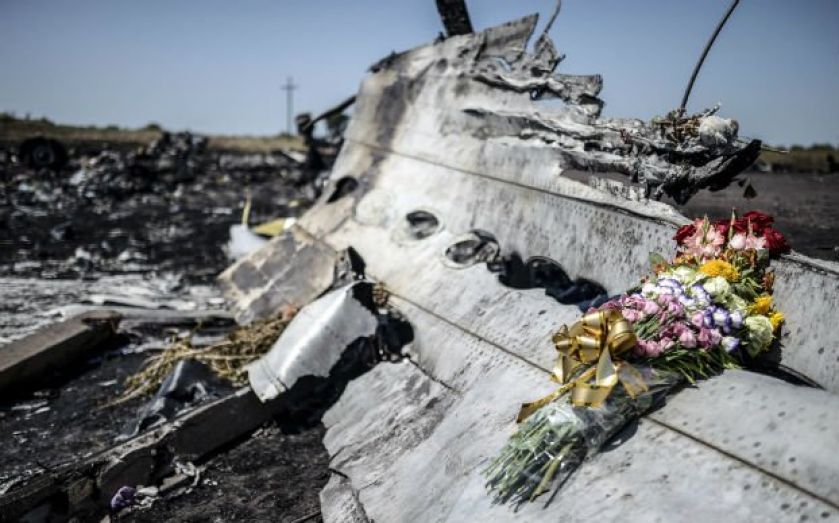 Malaysia Airlines flight MH17 was hit by numerous “high-energy objects” that “pierced the plane at high speed”, according to a report published by the Dutch Safety Board this morning.
The Boeing 777-200 broke up in the air as a result of the objects which “penetrated the aircraft from outside”, the report said. There were no indications of any technical or human error brought about by the crew.
The plane, which crash-landed in eastern Ukraine on its way from Amsterdam to Kuala Lumpur two months ago, had been travelling normally until 13:20 “after which it ended abruptly”. No emergency calls were made by the cockpit crew.
All 298 people on board died.
The report said the pattern of wreckage on the ground suggested the aircraft – which had no known technical problems when it left Amsterdam – had been split into pieces during flight.
The investigation is still underway, and the safety board said more research would be necessary to determine precisely what caused the crash. A full report will be published within one year of the crash date.
Tjibbe Joustra, chairman of the Dutch Safety Board, said:

The MH17 crash has shocked the world and raised many questions. The Dutch Safety Board wishes to determine the cause of the crash, for the sake of the loved ones of the victims and for society at large.

The initial results of the investigation point towards an external cause of the MH17 crash. More research will be necessary to determine the cause with greater precision. The Safety Board believes that additional evidence will become available for investigation in the period ahead.

The preliminary report issues the first findings in a ongoing investigation. From this point on, the investigation team will be working towards producing its final report. The board aims to publish this report within one year of the date of the crash.

See below for images of the plane and crash site:

Part of the cockpit roof. Investigators said the holes suggested it had been pierced from outside