The debate over how to increase voter turnout has produced some controversial proposals. None more so than the suggestion that the UK should follow Australia's lead and compel citizens to vote through force of law. In Australia, citizens can be fined £115 for refusing to vote.

The Institute for Public Policy Research (IPPR) argue young voters should be required to cast their ballots to tackle inequality. An IPPR report published in 2015 claimed voters were becoming increasingly older and wealthier, skewing government policy toward those groups while neglecting the young and disadvantaged.

Hotly debated at the time of its release, new polling from YouGov may add some weight to IPPR's cause. According to the poll, 55 per cent of people supported making voting in General Elections compulsory while just 37 per opposed the measure. 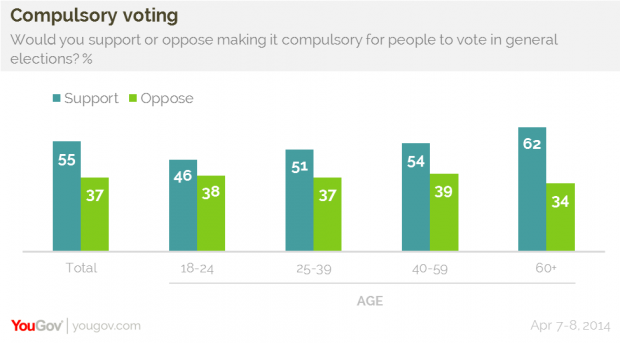 However, voters between the ages of 18 and 24, who are typically the least likely to vote, were the only age group not in support of compulsory voting by a majority, with 46 per cent in favour and 38 per cent opposed. In the 2010 General Election, 44 per cent of 18-24 year-olds turned out to vote.

While majorities in all UK age ranges said people had a duty to vote in General Elections, there was a significant gap in the responses of the young and old. Just under 70 per cent of 18-24-year-olds considered voting a duty but 86 per cent of those aged 60 and over thought the same.

"It's clear that Britons have a deep respect for the right to vote," said head communications at the libertarian Adam Smith Institute Kate Andrews. "But that right should never be conflated with a duty for individuals to actually take part in the voting process."

"Many argue that one could simply spoil their vote if voting were compulsory, but this does not take into account people who are choosing not to vote to protest government structure or the voting process. Indeed, not voting is the best, safest form of civil disobedience one can take part in," Andrews argued.

No major party contesting the 2015 General Election is proposing to force the electorate to go to the polls under pain of fine or imprisonment.