There are 110m unexploded mines in the world today. And that’s the number under the ground – it doesn’t include those being stored, transported or created. “The saddest thing about Ukraine, Syria, Iraq, Libya is that this is destruction on repeat,” says Hugh Morris, founder and managing director of landmine clearance company The Development Initiative (TDI). The firm is one of around 10 major players in the industry, with over half of those NGOs and others owned by the likes of G4S.
Morris, a Zimbabwean and former British Army officer, spent a decade working in de-mining before starting his own business. “My employer was bought up, and I thought there was space in the market for another operator. The key, I think, was finding others with completely different skills to set up with.” This has obviously percolated through: Morris is accompanied by Simon George, not one of TDI’s four founders, but its current head of business development, who previously held senior roles at Time Warner and Disney.
After registering the company in 2005, it took Morris and co four months to bag their first UN contract, but that “really got [their] foot in the door. It’s a chicken and egg game – you need experience to get the contracts, but the contracts are the experience – but from there, work continued coming in”. To date, TDI has successfully undertaken contracts across Africa and the Middle East.
The company, which has offices in Harare and London, goes in at what’s called the emergency phase after a conflict – the UN is there, and the salient tasks are to get people back to their homes and get roads open again. There are two main kinds of clearance that may need to be done: traditional minefield and battle area. The first is the result of someone using mines to deny someone access to an area – they’ve been manually put there. In a battle area, mines are air dropped and scattered randomly all over the place. For this, mine clearance firms normally use a big armoured machine that beats and churns the earth, detecting and exposing mines as it goes. Traditional clearance will usually involve sending experts straight in (ex-military operatives, more often than not), or using sniffer dogs – which can smell nitrates in mines – to detect them first.

But battlefields can be very different. Morris worked in Kosovo and Bosnia, and the company is currently looking at bidding for a contract in Turkey: “those jobs are dangerous but easy. You’re handed a set of mine maps by the military. If you’ve picked up 48 mines and that map says there are 49, you know you’ve missed one.” Africa, he says, is on different level: “it’s known unknowns. You’ve got an area of land covered in mines, but you’ve got absolutely no idea what’s where. There are a hell of a lot of false alarms in this game; it’s literally like looking for a needle in a haystack .”
This is where local knowledge becomes vital, because if anyone is going to know where mines could be, it’ll be locals. “We’re often the first in post-conflict. We’ll train 100 or 200 guys. Once you’ve done that, you tend to gain the trust of the village – and that’s invaluable. You’ve got a ready-made and eager workforce ready to go; that means your impact can be big.” Frequently, a contract will obligate liaison officers, but TDI will always add it to team capability anyway, running mine risk education lectures at local schools and hospitals. “You need to do as much as possible while you’re there – even down to buying local vegetables and clothing.”
Having a positive impact is very important to Morris. TDI’s full name – The Development Initiative – reflects an ambition the firm has always had: “the thinking has always been that it’d enable us to delve into things post the emergency phase and in the development phase – like TDI Medical”. The challenge, however, is juggling an intensive and highly dynamic workload with growing their business – “we’ve just been a bit busy,” chimes in George. 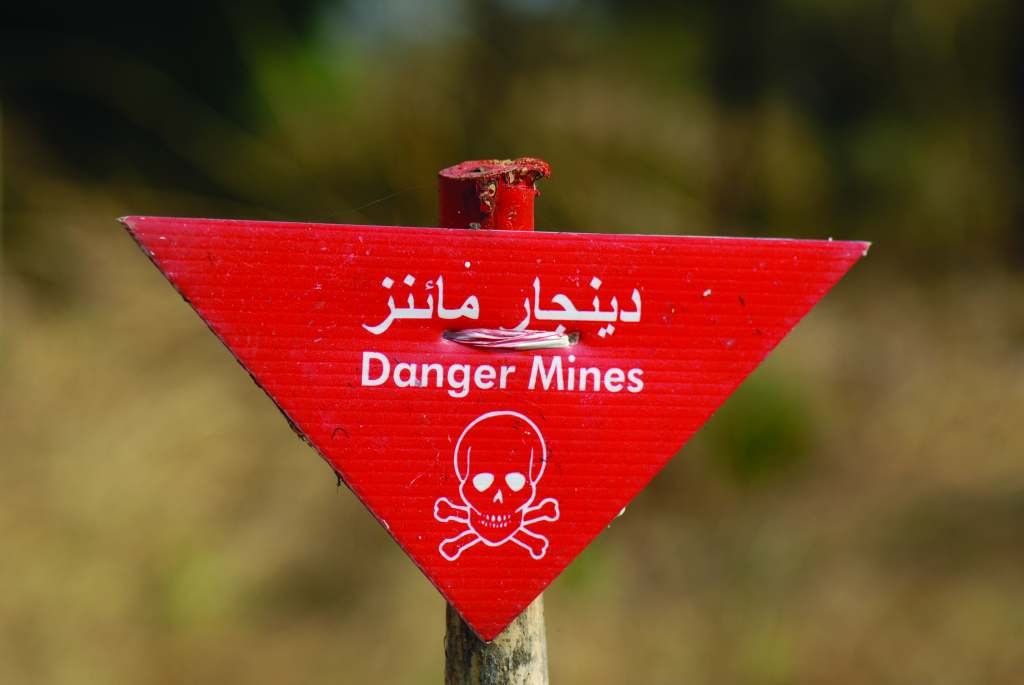 But what’s it like making money from the sad inevitability of continuing conflict? It was a thoroughly unfair suggestion to level at Morris, but his measured response sheds further light on the importance of his work: “you’re looking at months and months and millions and millions of dollars to repair vast contaminated areas, and that doesn’t even touch on the human element. People might think ‘oh, it’s good for their business’ – it’s not. There are already far too many mines to keep us busy. There is far too much to clear up today, before you even factor in what’s happened in the last year. Repeat destruction is the saddest thing you can imagine. Islamic State has put everything on fast forward.”
And the conflict landscape is changing. “We’re now dealing with situations where conflicts end, but rebel groups are still at large with activity ongoing.” In this kind of environment, IEDs and booby traps are rife. This is a big problem for TDI and other firms; it pushes up the risk, and means they have to pay contractors more. But worse, it’s taking them “into a grey area”. Usually neutral, “now, we can be seen as supporting a particular side; that means there’s a whole raft on things we have to consider. When we visit a village elder, we might be treated with suspicion.” This isn’t helped by the fact that ongoing skirmishes mean numerous false leads: “clearing a mortar bomb is a 20 minute job, but the thought process now has to be made with your IED hat on – is it a come-on? Is there a sniper? This is a whole new dynamic – and it’s uncharted territory.”

“Repeat destruction is the saddest thing you can imagine”

Company name: The Development Initiative (TDI)
Founded: 2005
Turnover: $20m (£13m)
Number of staff: 20 permanent, and around 600 under current contract
Job title: Managing director
Age: 48
Born: Zimbabwe
Lives: Zimbabwe
Studied: British Army officer
Drinking: Big fan of South African Pinot Noirs, and the odd cold pint
Eating: Love a good English fry up (when in London). These days, I eat fish to watch the waistline
Currently reading: Fortress, by Andy McNab
Favourite Business Book: Not a big fan of the business book genre, but enjoyed Freakonomics, by Stephen Dubner and Steven Levitt, and Rich Dad, Poor Dad, by Robert Kiyosaki and Sharon Lechter
Talents: Working with people. Getting the team to play and understand the business
Heroes: Robert Falcon Scott (of the Antarctic)
First ambition: To see the world
Motto: “Who dares wins.” Also, “There is no such thing as luck. You make your own luck.”
Most likely to say: “Yes… if I can assist in any way”
Least likely to say: “No” – I like to think I’m an enabler, in a good way!
Awards: Not a big thing in our sector!