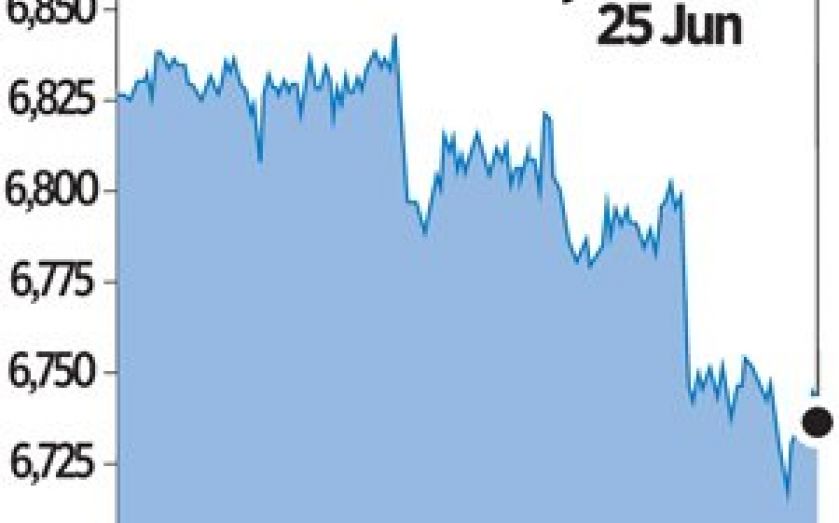 Security forces are fighting rebels for control of Iraq’s biggest oil refinery at Baiji and despite the fact that the Brent crude oil price lost ground, equity traders were concerned enough about the situation to take money off the table, with risk-sensitive mining stocks among the hardest hit.

Aircraft part manufacturer Meggitt was among the worst performers on the FTSE 100, down 3.24 per cent to 508.50p, after a downgrade from JPMorgan.

Shares in revived bank TSB were four per cent lower on its first day of official trading following the sale of a 35 per cent holding by Lloyds Banking Group on Friday.

The stock listed at 260p and rose as high as 300p in conditional dealings prior to the weekend, but was 12p lower at 285p today after banking giant HSBC issued a downbeat note and placed a target price of 270p.

Meanwhile, shares in bus and rail operator Stagecoach were flat at 377.7p after it reported annual results in line with expectations. Revenues were up 4.5 per cent to £2.9bn in the year to 30 April, with profits two per cent higher at £180.7m.

But Shire gained 2.6 per cent, to close at 4,517p, the top FTSE 100 riser, as US drugmaker AbbVie declined to rule out a hostile bid for its London-listed peer after its $46bn (27bn) takeover approach was rejected.

Shire built on gains seen earlier in the session on a U.S. court endorsement of its patents on top-selling hyperactivity drug Vyvanse.

While analysts and traders reckoned the stock market was susceptible to more falls at the hands of geopolitical concerns or factors such as signs of an economic slowdown in China, they bet on any weakness proving short-lived.

In the year to date, the FTSE 100 index is broadly flat but still hovering around seven-year highs.