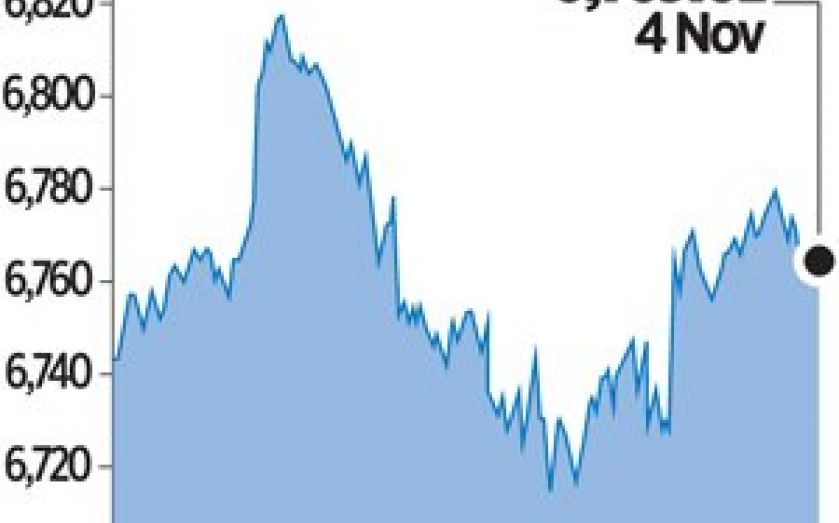 HSBC advanced 2.3 per cent in its biggest one-day rise in four months after quarterly profits rose by a tenth, year-on-year, meeting analyst expectations and reassuring investors unnerved by weak numbers from several peers.

Investor interest was further fanned by the stock’s underperformance over the past three months, which has left it at its steepest discount to the FTSE 100 since February 2012, and second steepest in the past five years based on 12-month earnings expectations, according to Thomson Reuters Datastream.

Analysts at Barclays said the results and outlook were “reassuring”, reiterating their overweight rating. HSBC, which accounts for 7.5 per cent of FTSE 100 capitalisation, was responsible for nearly half the index’s gains yesterday.

“We have it as one of our preferred selections in the sector … Their statement was a reflection that things are not that bad out there,” said Peter Botham, CIO at Brown Shipley.

“Fundamentally we are still optimistic on the outlook but the biggest uncertainty is whether equities now fully reflect the likely growth of next year, or whether there is still further to go.”

Aside from HSBC, the corporate newsflow offered some cause for caution, with profit warnings from engineering firm Weir Group and budget airline Ryanair sending their respective shares down 3.7 and 12.8 per cent.

But the much bigger weighting of HSBC – coupled with gains in big name mining stocks thanks to strong data from top metals consumer China – kept the overall blue-chip index firmly in positive territory.

Broad sentiment also benefited from growing expectations that the European Central Bank will focus on stimulating the economy at this week’s meeting, with some even seeing a chance of an interest rate cut following a surprise drop in inflation.

Technical analysts said the May peak of 6,875.62 was the next key target.