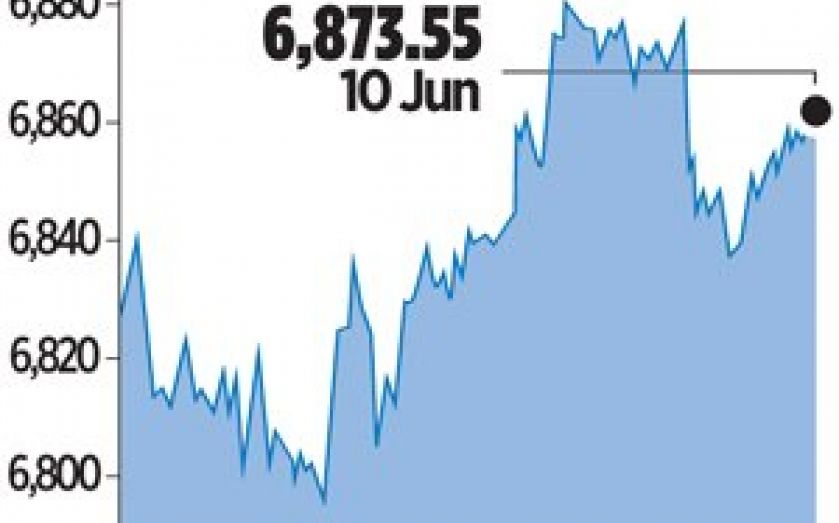 AFTER two days of gains in which the FTSE 100 moved ever closer to its record high, London’s main share index yesterday dipped slightly as warring pay TV broadcasters dragged on the index.

BT Group fell 2.36 per cent to 396.50, the biggest faller, after BSkyB announced that it will offer a free, fifth sports channel to those who take their broadband service.

Among the climbers, two takeover targets gained ground again. SABMiller rose 182.5p to £34.60 on persistent talk that the brewing group could be targeted by Anheuser-Busch InBev. And Smith and Nephew, which has been mentioned as being in the sights of US rivals Meditronic and Stryker, saw its shares rise 25p to £11.

Pumps manufacturer Weir added 43p to £26.77 after Societe Generale moved from sell to hold and raised its target price from £23 to £26 a share.

And Rolls-Royce rose 5p to £10.76 after a positive note from Investec, which noted its strategy “to become a diversified industrial rather than a pure play aero engine company”.

Mid cap Oxford Instruments was 30p better at £13.74 despite virtually flat full year profits of £47.1m as it said orders in the first two months of the current year were ahead of the same time last year.

Imperial Tobacco added 20p to £26.23 after the company unveiled a near £2bn flotation of its logistics division.

On the junior stock market, 7digital, the digital music and radio services company, added 1p to 33.5p on its first day of trading on Aim after its reverse takeover of UBC Media.

But on the down side, continued uncertainty over strikes at South Africa’s platinum mines sent Anglo American down 19.5p to £14.52 while among the mid-caps Lonmin lost 7.9p to 242.9p.

And designer clothing group Ted Baker dropped 84p to £19.35 despite an 18 per cent rise in first quarter sales.

Among other fallers, Sports Direct dropped 1.3 per cent after Goldman Sachs removed it from its “conviction buy” list, citing its recent strong performance. It has gained 65 per cent since last June, but is still about 33 per cent below Goldman’s target price of 1,100p.