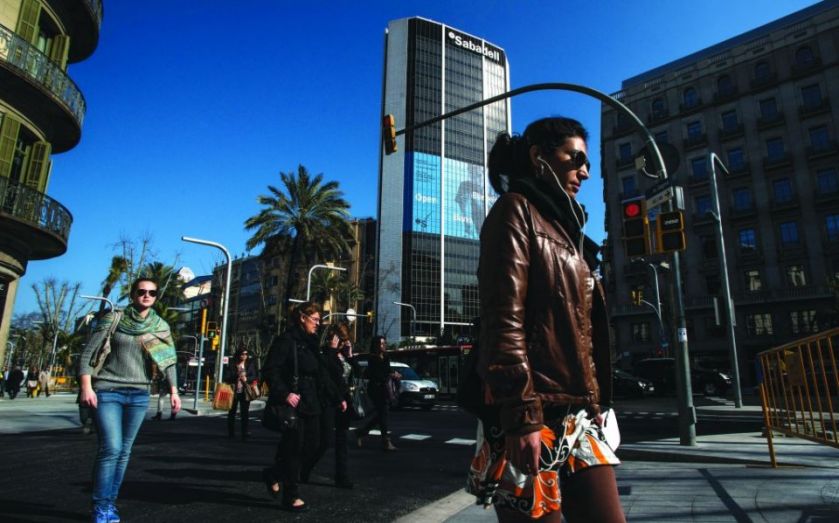 Lloyds is set to receive a final total of £1.5bn for TSB if the Banco Sabadell sale goes ahead – twice the £750m for which it had previously agreed to sell the lender to the Co-op Bank.

The giant bank was forced to sell off TSB under the terms of its 2008 bailout.
The process began badly, as Lloyds’ preferred bidder, the Co-op Bank, dropped out in 2013, shortly before it disclosed the discovery of a £1.5bn capital hole in 2013.
However, Lloyds is now set to recoup far more money from the TSB than it had expected at the time.
The Co-op had offered a maximum of £750m, depending on the TSB’s performance.
Instead Lloyds floated the bank on the stock market. By selling 50 per cent, so far Lloyds has received more than £600m.
If Sabadell’s purchase goes ahead, Lloyds will get 50 per cent of the £1.7bn pricetag, around £850m – taking its total sale revenues to £1.5bn.
The 340p offer – which has not yet been made formally – represents a 30.1 per cent mark up from the float price of 260p.
“The group also notes that the board of TSB Banking Group plc would be willing to recommend an offer at this price, subject to reaching an agreement on the other terms and conditions of any offer,” said Lloyds.
“The group is in discussion with Banco de Sabadell regarding the terms of an irrevocable agreement and would be minded to accept an offer at this price if it is made, subject to reaching a satisfactory conclusion on the terms above.”
Lloyds’ share price rose 1.33 per cent on the day.
While the rise in TSB’s price is significant, its £1.7bn price tag compares with Lloyds’ market capitalisation of more than £56bn.

PROFILE: WHAT IS BANCO SABADELL?

Banco Sabadell is Spain’s fifth-largest bank, but is relatively unknown outside the country.
Founded in the town of Sabadell in Catalonia in 1881, its history is 70 years shorter than TSB’s.
The lender stayed local for decades and still serves mainly small businesses and affluent individuals.
It began expanding into more towns and regions only through the 1960s and 1970s.
That began a spurt of growth. Although it kept the operations at a relatively modest scale, it started to expand internationally. The first branch abroad was established in London in 1978. Although it is not a big brand, it still exists, near Charing Cross.
But its international expansion began on a large scale only when it bought US lenders TransAtlantic Bank in 2007 and Mellon United National Bank in 2010.
That growth spurt came too late to protect Banco Sabadell from the brutal property market crash in Spain. While giant rivals Santander and BBVA were partly protected by their huge global operations, Sabadell suffered.
Its profits were crushed in the crisis years, but not as badly as other banks in the country. It did manage to hoover up the remains of some banks which were propped up by the state.
By 2013 it was well and truly on the acquisition trail – it even bought Lloyds’ retail and private banking operations in the country.
And now it hopes to snap up TSB to make a grand entrance into British banking.
It could follow Santander’s model. The Spanish giant bought Abbey National in 2004, Alliance and Leicester in 2008, and chunks of Bradford and Bingley after its crash.
Analysts have struggled to see the benefits for Sabadell; buying TSB brings diversification, but investors could get that for themselves in any case. Alternatively, TSB does have big plans to grow steadily over the coming years, and the investment represents a bet on the UK economy which is growing more strongly than much of the Eurozone.
1810: FOUNDED
Long before TSB became the listed bank we know today, Reverend Henry Duncan founded a trustee savings bank as a way for the local poor to save and invest. That was a long time ago, but when the bank relaunched in 2013 its cinema adverts focused on the Rev Duncan.
1887: MERGERS
Over the 19th century, the trustee model took off, and hundreds of TSBs formed the Trustee Savings Bank Association. Its growth was like that of the co-operatives or building societies.
1986: GOING PUBLIC
That setup lasted for 99 years. Just before a swathe of those other mutuals floated and became banks, the TSB took the plunge, floating on the stock market.
1995: TAKEOVER
This structure as an independent public firm lasted for nine years. In 1995, the TSB merged with Lloyds, becoming Lloyds TSB.
2008: HALIFAX BANK OF SCOTLAND
When the financial crisis struck, Halifax Bank of Scotland – HBOS – crashed. Competition rules were eased to let Lloyds TSB take the group over. But its predicament was even more dire than feared, and brought down the combined group too. The government bailed it out, but EU competition rules meant it had to shrink again.
2013: BREAKUP
To meet those criteria, Lloyds cut 632 branches and millions of customers out of the group, and resurrected the TSB brand, which returned to the high street.
2014: GOING PUBLIC, AGAIN
TSB floated as an independent bank in June 2014, and Lloyds cut its stake in time to 50 per cent.
2015: TAKEOVER?
If Banco Sabadell’s deal goes ahead, TSB could lose its independence after just one year.

BEHIND THE DEAL: GILLES GRAHAM – CITI

1 Gilles Graham is Citi’s Europe, Middle East and Africa (EMEA) chairman for the financial institutions group.
2 He is leading Citi’s team working for TSB on this deal, having worked on the float, too. Other successes include the London Stock Exchange’s LCH Clearnet investment.
3 Graham has had a wide and varied career so far. He worked at Nomura before coming to Citi in 2010, when he joined as part of a wave of investment bankers bolstering the team.
Also advising…
Citi’s team also includes John Sandhu, who worked on the Virgin Money float; Ed McBride, who worked on the Columbus–Cable and Wireless tie up; and Robert Redshaw, who also worked on the TSB and Virgin Money IPOs. Meanwhile, Rothschild is also working for TSB, and Goldman Sachs is working for Banco Sabadell.