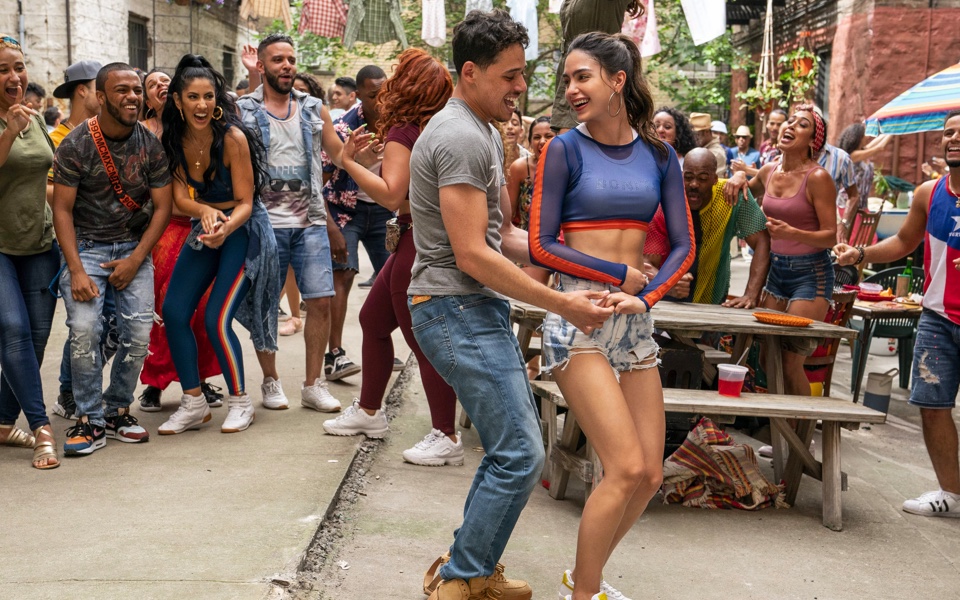 Lin-Manuel Miranda’s stage phenomenon Hamilton became a streaming hit last year, as Disney+ released a filmed version of the original cast performance in order to capitalise on a captive audience. It showed that there is still a huge enthusiasm for the writer’s work, which is why the poster for In The Heights features the show’s logo so prominently.

A film version of his first Broadway musical (co-written with Quiara Alegría Hudes), it’s the story of a corner of the Washington Heights neighbourhood in Manhattan. A tight-knit community made up of mostly Latino families, we follow a number of residents following their dreams in the days leading up to a fateful blackout. There’s Nina (Leslie Grace), a promising college student who comes back home reluctant to tell her doting father (Jimmy Smits) that she’s dropped out; designer Vanessa (Melissa Barrera) whose dreams of her own boutique are thwarted by finances and prejudice; and Bodega owner Usnavi (Anthony Ramos), who reflects on the neighbourhood he loves as he plans to leave to rebuild his father’s bar in the Dominican Republic.

Directed by John M. Chu (Crazy Rich Asians), the Manhattan streets become the stage for a vibrant, joyous story of people working their way up, and in some cases overlooking what they have. As with real life, racism is an issue everyone deals with as an everyday occurrence, reacting differently depending on their age and experience. While not everyone will feel represented, the stories of love and hope will grab at the heart of everyone who sees it.

During elaborate musical numbers, people burst into dance, draw their ambitions in the air, and walk up the side of high rises. Ramos’ narration, telling the story like a fairy tale to children on a beach, adds to the sense of beauty and wonder. Like Chu’s previous hit, there’s a hit of Old Hollywood glamour mixed with a modern sensibility. For anyone who has spent the last eighteen months in uncertainty, the strength and optimism will be a joy to behold.

Ramos is perfectly cast as Usnavi, not least because he played the role on stage and is a Miranda veteran having been in Hamilton. He understands the building energy of the lyrics, that sense of ambition in Usnavi that seems to rev up with each bar. He works alongside an unforgettable ensemble, from Corey Hawkins as Benny, a cab dispatcher in love with Nina, to Olga Merediz’s heart smashing turn as Abuela, the mother of the block. Without giving too much away, she has several moments that will have you in a puddle of tears.

Mixed in with the flips and fantasy is a very real message about what it is to be denied opportunities based on where you are from. Grace’s Nina is the most powerful example of this, explain the prejudice that she experiences in Princeton, while Vanessa is deliberately tied up in red tape by realtors who flash a much wider grin for a white couple looking at the same space. Ramos’ cousin  Sonny (Gregory Diaz IV), an undocumented minor, begins to face the reality of a future in a system that won’t acknowledge him. Hudes and Miranda deal with complicated subjects without ever making the story dry. The music, and Chu’s direction, show the beating heart beneath the headlines.

Featuring Miranda in a small but enjoyable supporting role, Hamilton fandom will certainly be the driving force for people going to see In The Heights. However, incredible storytelling with be the reason they will want to watch it again.

In The Heights is in cinemas from 18th June.