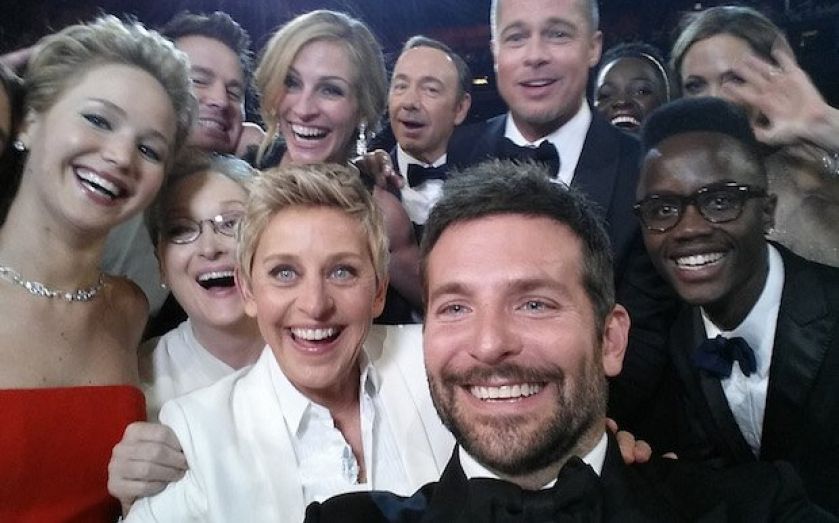 IT WAS the tweet heard round the web. The selfie Ellen DeGeneres took during the Oscars became an internet sensation. First, it garnered the most retweets ever: as I write, Twitter reports 3.3m users have recommended it in this way. The previous record holder, President Barack Obama, had managed only 780,000 retweets, for a photograph celebrating his reelection on 7 November 2012.

But then something much more interesting happened. The celebrity image took on a new life as an internet meme. Instead of just rebroadcasting the original through their own channels, people started doing their own versions. Some brands got in on the act – The Simpsons version was pretty good – but for the most part this was a homebrew effort. For the sheer delight of creative play, people broke out their Photoshop skills, boxes of Lego or simply rounded up their friends and provided their own take. There’s a version where every face in the shot is Ellen’s, another where everyone’s head is replaced by the snout of a shiba inu (in honour of the doge meme, notorious for inspiring its own cryptocurrency – very internet). But my favourites were the ones of people from all walks of life creating their own tributes. Even the Adam Smith Institute got in on the act.

It would be easy to see this story as further proof of the abiding power of the celebrity: everyone wants to see photos a famous person takes of her famous friends.

There’s some truth to that. Degeneres has 27.6m Twitter followers and @BarackObama boasts even more: 41.9m. Yet the far from famous Terry Shipman, a civil engineer in Texas who has only tweeted seven times, posted a selfie in response, of himself and his two dogs. It got over 140,000 retweets. In a medium that connects everyone to everyone else, networks can amplify even apparently insignificant voices.

If we listen, what those voices are telling us matters more than the chatter of celebrities. I have written before about the significance of the selfie’s rise: it indicates the arrival of an age in which the passive audience is replaced by an ocean of active participants. Anything published is now a platform: an opportunity for everyone else to remix, hack and add their own twist to the material. The aggregate power of this phenomenon is far bigger than the few million retweets one movie star can generate.

The abilities of everyday people, coordinated through online networks, are a vast resource we are just starting to tap. The first lesson of selfie-nomics is that when it comes to productivity, there’s plenty of room at the bottom.