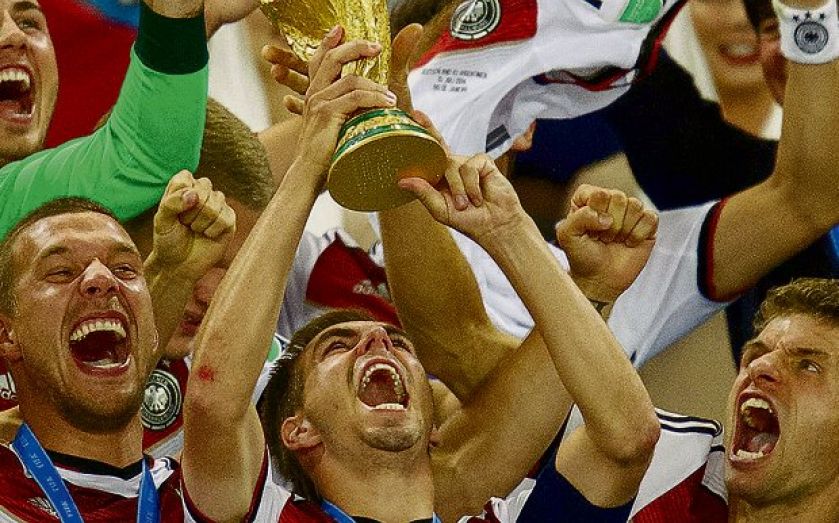 You don’t need everyone to be a star player for your business team to be successful.
Businesses can learn a lot from successful sports teams. After all, the balance between group and individual, consistency and novelty, and working under a common goal are things both must do well.
An estimated 1bn people tuned in to watch Germany win the World Cup on Sunday night. It’s been 24 years since the Mannschaft last won the tournament, and it’s 10 years on from the embarrassment of the early exit from Euro 2004. So what’s the team been doing right?
Great play, hard work and grit secured the eventual triumph, according to Andreas von der Heydt. The director of Kindle content at Amazon in Germany, writing for LinkedIn, says there are several lessons to be learnt from a team which, although still not perfect, has mastered several key competencies. Here’s City A.M.’s take on three of his points.

The goal for all the World Cup participants was obvious, but von der Heydt emphasises the specifics powering the German team. For starters, coach Joachim Low got players focusing on strategies that were both group and individual focused: how many goals they could afford to have scored against them, acceptable minimum scores and, therefore, what each player would need to deliver individually.
Working as a team on individual targets can be the most effective way to aim high – in or outside the sporting arena. A 2014 study by The Sports Journal found that the most powerful kind of strategising isn’t individual goal-setting or group goal-setting, but group-focused individual goals – where team input and accountability are used to target each individual’s best qualities.

Germany doesn’t have a Ronaldo or a Messi – but who says winners need a stand-out? Writing for Forbes, business lecturer and author Mark de Rond says it’s not always true that the best teams comprise the best individuals. A 2004 Harvard study found that 46 per cent of 1,052 top stock analysts couldn’t replicate outstanding performance when they moved to a new bank – even after five years there. This could be because leading people develop highly distinctive ways of working within a given team. Furthermore, even star individuals rely on the network and support a team brings in order to be the best they can be.
Sport has taught us before that sacrificing an ounce of talent for a bucket of sociability could help your team. De Rond singles out Real Madrid’s £400m splash-out on top players between 2004 and 2006 – all for a slew of losses. In contrast, between 2000 and 2006, baseball team the Oakland As paid considerably less than most rivals but won more games than nearly any other club. Getting a group that works should be a top priority for any leader: “Choose your best team, rather than your best individuals”, advises de Rond.

An innovative and flexible approach accounted for much of Germany’s success, says von der Heydt. Built on by Low, former head coach Jurgen Klinsman established a floating formation, where players can switch roles during a match. Keeping things novel, stretching individuals’ capabilities, and, of course, surprising the competition, can be vital to success.
To achieve a similar result in business, why not take a tip from the recently-developed corporate structure of Holacracy? Doing away with traditional management, one of its maxims is to distinguish between “roles” and the people filling them. One person can hold multiple roles at once, and responsibility is shifted regularly, depending on what’s seen as most conducive to achievement.

Keeping up with contact changes is a faff. Addappt allows your contacts to make updates themselves. As soon as they change their contact information, your address book will be updated too, sending them a note to secure permission. Developed by Microsoft and LinkedIn veterans, it only connects users with verified emails.