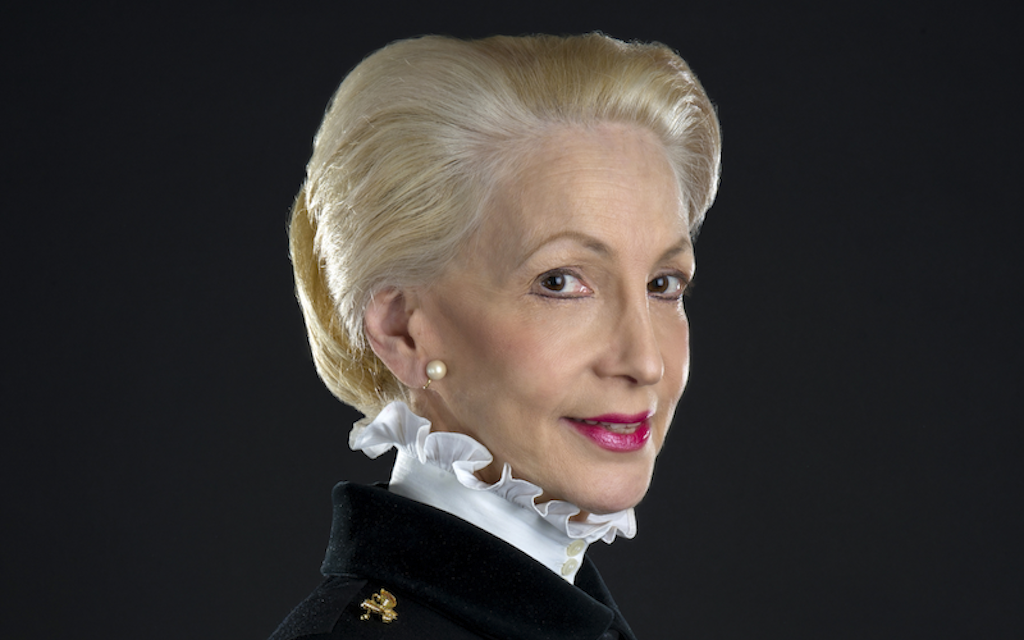 Ping! A reply from Lady Barbara Judge drops in my inbox, exactly 15 minutes after I sent over an email asking her whether she would be available for a “ladies lunch”.

“Dear Maike I would be glad to do it. The problem is to find a date. With best regards, Barbara.”

Surprised and pleased at the quick response, I am also relieved that we got past the hurdle of titles from the outset. That, however, was the easy part – the hard part, as she had warned me, was finding the time. With the help of her PA, we manage to clear an hour for lunch at City Social, perched at the top of Tower 42.

On the day, I receive a message on my phone. It’s Barbara. In her distinct American accent, she explains that she’ll be a few minutes late. Lunch has been tightly squeezed between two meetings. As it happens, we both arrive at the same time and she explains her earlier anguish: “We hadn’t accounted for travelling time and I didn’t want to let you down by being late. It’s important to me to be reliable. So few people are these days – they say they’re going to do something and then they don’t. I really struggle with that.”

Given the tight schedule, we quickly order, and to illustrate her point on the importance of reliability, Barbara tells me she went back to work 12 days after her son was born. “I had a commitment to make a speech to 2,000 brokers at a convention of the Securities Industry Association. I told the doctor and he said, ‘just be fit and don’t get too fat’. The speech went well and I returned to work because I loved my job.”

That’s a bit extreme, I say, but Barbara is unfazed. “My mother worked and she brought me up to work. She said, ‘A good job is harder to find than a good nanny and your job, Barbara, is to work to find a good nanny.’ I said: ‘Mum, if I get a nanny then the child will think that the nanny is the mother.’ She said: ‘No Barbara, a child doesn’t forget their mother, it’s just one more person to love.’”

She often took her infant son (and the nanny) to work. One day, she received a call telling her that the chairman of the New York Stock Exchange was downstairs to see her. “I thought, ‘oh my goodness, what am I going to do.’ So I hid the nanny and baby in the bathroom until the meeting was over… I’ve never told anyone that story.”

She probably concludes from my face that I’m unsure whether to be amused, impressed or appalled. “Look, it was a long time ago and things were different back then. If you wanted to go and watch your son in a play – you would tell your boss: ‘I am going to a meeting and I will be back in two hours.’ Today, you tell your boss: ‘I am going to see my son in a play’ and they’ll say ‘good for you’. Things have moved on a lot – for the better.”

Just shy of 70 (she turns 69 in December), Barbara speaks from experience. Her career in law and banking has included stints in New York, Washington, Hong Kong and London, with a CV second to none. Working as a corporate lawyer in New York in the 1970s, she became a partner in her early 30s, went on to become the first ever female executive director of British merchant bank Samuel Montagu & Co, advised the UK and Japanese nuclear industries, and has held more senior executive positions than you can count on both hands. In fact, the words “first female” can be added to many of her achievements, the most recent being chair of the Institute of Directors (IoD).

During her term at the UK’s 112-year old business body, she has a three-part mission: to open the doors wider to women (“it shouldn’t feel like a men’s club”), to encourage young entrepreneurs (“make it a place to meet and exchange ideas – not stuffy”), and to encourage older workers to keep on going.

“Retirement, to me, in today’s world is unfortunate. There are lots of lawyers or accountants who get forced out because they’re in their 50s or 60. I want them to have a role to help younger people by being more than just mentors. For example, a retired accountant could work with a young business as a part time financial officer and get paid.

“I think unless you pay people, they don’t pay attention. It’s got to be an amount of money that’s worth getting out of bed for and that makes you feel valued.”

So far, she says, she has made the most progress on women. Her mantra is that women should help other women. “Every time I get on a board – and you can look this up – I always put another woman on, if I can. And then I make a toast and I say to her ‘because they really wanted you.’ If they thank me, I say ‘don’t thank me – help another woman.’”

And if there’s no-one helping? “Well… it’s hard, it’s definitely hard,” admits Barbara. “You could go to the headhunters, but unless you have a senior role in a company or specific subject matter experience or if you’re a known person, it will be hard to get you on a board. If you’re a younger woman or a woman that doesn’t have a known portfolio, you have to find a way in.”

One way that works, she says, is to get on the boards of charities or non-profit organisations. “If you’re sitting with important people, who can listen to your opinions and see that you’re serious, they may well think of you when there is an opportunity. It is also a lot about luck and letting people know that you’re interested.”

It’s also important to see and be seen, she says. “Go to events – if you leave having met one nice person, who you would like to meet again, then it was worth the effort. My mother used to say ‘nothing’s happening if you stay at home.’”

She adds: “When I started at the IoD, I organised an event – inviting senior and junior women – I didn’t call it a network event, I just called it a party. All the men wanted to come – I said, ‘Listen, you have had men’s parties for years.’ I organised it for women to meet, without any stated objective.”

At this point, she asks me how my starter is, and offers me a taste of hers. We swap plates. The view from City Social is spectacular. She made the booking and I ask how she secured the seat – we have the best table in the house. “I told them I might write something. And I will – if I like it.” To relax, Barbara writes food reviews of restaurants visited on her business trips.

“I am a very big foodie – I have always been – since I was young. I was a chubby and plain child – my mother used to hide the candy. And I would find it. I still love sweet things. I used to have a party called Bubbles and Sweets – it was just 20 desserts and champagne – and people would say the reason Barbara has that party is because she likes to eat the leftovers, and it was true.”

She tells me that, when she was about 13, her mother took her to the doctor. “He said that if you don’t lose any weight, you won’t have any fun. I went on a diet and lost 10 pounds in two weeks and by luck I grew at the same time, so it all kind of magnified. But nobody noticed, because once people have an impression of you, it’s hard to change.”

She adds: “If you were chubby once, you’re always chubby in your head. I still weigh myself everyday and tonight, because we’re having this, I won’t eat anything.”

Really? I look down at the tiny works of art dished up as lunch. Delicious yes, but hardly substantial enough to put me off my dinner. Barbara also sticks to sparkling water (but insists on drinking it out of a wine glass).

“I am not a moderate person – I think moderation is boring,” she explains. “I would rather have some great meals and diet in between than constantly control my craving for fabulous food.”

Is it that important for a woman to be thin, to look good? I ask. “I think how you look matters. I am not saying you have to be thin but I think it’s about being neat and tidy because, if you look messy, people think you’re messy in your head.” Barbara is the epitome of neatness in a dark suit, her hair tucked away in a tidy bun.

She continues: “I also think it is important to look professional – 70 per cent of the first impression is how you look, 20 per cent is how you sound and only 10 per cent is what you say. So my theory is that you want to take charge of your own appearance. You need to decide what you want people to think of you and then portray it.”

What do you want people to think when they look at you? “That I am serious.” And are you? “I really am a marshmallow, that’s what I am. I love food and lots of frivolous things. But in business I am serious and I want that to be the first impression. I want people to think that I am serious and reliable – that’s why I was so keen on letting you know that I was going to be late, although I wasn’t. If you tell someone you’re going to do something, you do it.”

Before lunch, I read a piece which criticised Barbara for sitting on too many boards, and thereby running the risk of missing something. I ask her about this. She faces me square-on. “First of all, they never say that about a man. Second of all, they keep arguing in the City about how women should be given more opportunities – and then when they do, that’s also not good enough. Third of all, people always take references – if they ask you to do a job, it’s because they think you can do it. I don’t have too many jobs. I would never take on anything that I didn’t think I could do – responsible people don’t take on jobs if they don’t think they can do them.”

The hour has raced by, and there’s been no time for dessert, although we have both enjoyed our lunches and fulfilled Barbara’s criteria of never eating a poorly tasting calorie.

As she gathers her things and heads for the cloakroom, she smiles: “I hope that’s been useful… would you like to come to my party?” There’s only one answer to that question. “I would love to.”

The view is the first thing you take in, and it is stunning… The service, as you'd expect, is efficient, discreet and highly professional.