Kazakhstan is a long way off the high rise life in China, but the Silk Road could take it in that direction 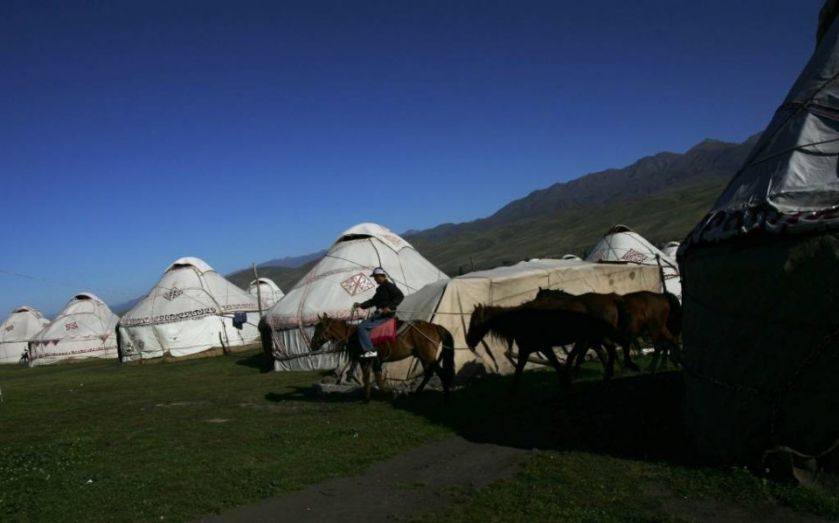 Thousands of years ago on the ancient Silk Road, horses were to Kazakhstan what silk was to China— prime commodity.
Chinese traders would traverse the Tian Shan mountains of eastern Kazakhstan, caravans loaded with silk, their most valuable product. In exchange, Kazakh nomads would equip them with Central Asian horses, prized for their strength and stamina. These early exchanges gave Chinese merchants better transportation, allowing them to go further afield, eventually as far as Europe.
In this month’s episode of CNN International’s newest series ‘The Silk Road: Past, Present, Future’, I discovered how today’s Kazakhstan is hoping to reclaim its historical position as a Silk Road transport and transit hub, the crossroads between east and west. On the modern trading route, trains are the new horses, and logistics centers the new way stations. Centuries ago, camels and caravans crossed miles and miles of sand dunes taking months to complete the journey from China to Europe.  Today it can be done in a few weeks thanks, for the most part, to Kazakhstan’s “iron silk road” initiative.
Spread across vast expanses of open terrain, small townships in Kazakhstan are connected by one thing– train tracks. More than 17,000 kilometers of it. It’s easy to see why the railways are considered a lifeline for Kazakhs. The world’s longest rail journey from began earlier this year – an 8077 mile, 21-day trip from China across Kazakhstan, Russia, Belarus, Poland, Germany, France and finally Spain. It’s perhaps the most tangible example of what the 21st century Silk Road is and where it’s headed.
When China’s capital moved east from Xian to Beijing in the 11th century, commerce on the ancient Silk Road declined. China focused on maritime navigation and trade from the east. That pivot eastwards continued in contemporary China with the majority of Chinese exports traveling from ports in Shenzhen and Shanghai, around the Strait of Malacca and India, through the Suez Canal to Europe and beyond.
However, as more and more of its manufacturers move inland, China is looking to develop trade from the west, following the tracks of the fabled Silk Road and once again making Xian the gateway to Europe. While shipping by sea takes about five weeks, the new Silk Road train can deliver goods from China to Europe in three weeks.  It’s more expensive than sea freight, but the shorter transit time often makes it worthwhile for multi-national companies dependent on global trade. Railway officials in Kazakhstan told me the goal now is to optimize the inland route and reduce costs so the new Silk Road becomes even more viable for businesses.
Kazakhstan’s biggest dry port and logistics center has been built in Khorgos, a massive Free Trade Zone in the middle of a desert bordering China. Officials say it’s the last step for the revival of the new Silk Road. Every day some two or three freight trains arrive from China at the area’s main train station—Altyncol. Chinese trains can’t pass through Kazakhstan without stopping here, because they have different track widths. So freight has to be unloaded from Chinese containers and then reloaded on to Kazakh trains.  The whole process only takes four hours. Until a few years ago, nearly all the freight transiting through Kazakhstan was Russian, but last year alone Altyncol handled nearly two million tons of Chinese cargo. Officials expect it to more than double this year.
The potential is obvious. And as one railway official told me, it’s not just about building a stronger economy in a post-Soviet era. The aim is to spread the wealth and bring development to more remote parts of the country. Kazakhstan has some of the largest oilfields in the world, but as in many oil dependent economies, wealth is not evenly distributed when other industries aren’t developed.
I saw that development for myself in Khorgos where the new inland port is bringing employment and an entirely new town has been built, complete with sports complexes, shops and even a local discotheque.
It’s a long way off the shiny high rises the Chinese have set up across the border in their own version of Khorgos. But still, it gives you a sense of the direction Kazakhstan wants to take.
Share:
Tags: Expert Voices