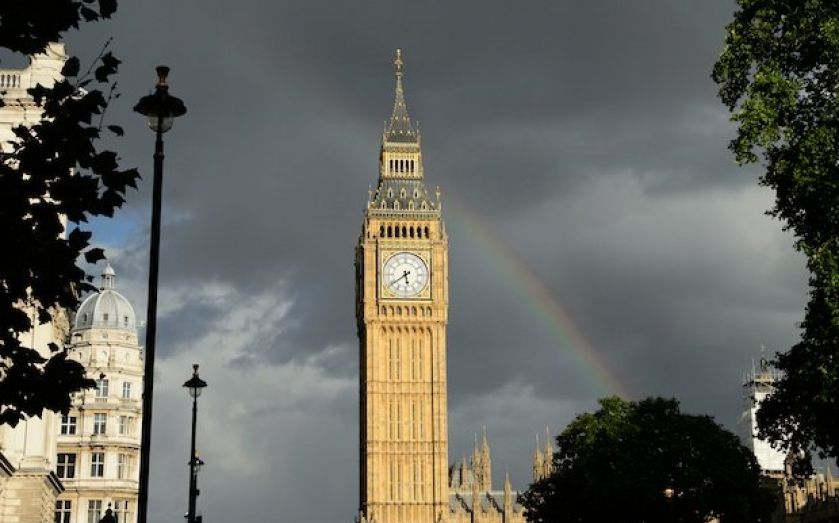 THE CURSE of Norman Lamont makes politicians wary of mentioning the “green shoots” of recovery. But when the data show growth of 0.4 per cent, 0.7 per cent and 0.8 per cent in the first three quarters of 2013, it’s clear. The UK is off life support. Sure, the recovery is heavily consumption-led, with exports down 2.4 per cent, imports up 0.4 per cent, and consumer spending up 0.8 per cent in the third quarter. But confidence is returning. Now we must cure the disease at the root of the UK’s illness: our addiction to credit-fuelled growth instead of sustainable trade and competitiveness.

By rescuing the economy from Greek-style implosion after the shambles left by Labour, George Osborne has proven he is a good chancellor. Tomorrow is his chance to show he is a great chancellor. He must reject the siren calls for giveaways, show his commitment to tackling the causes of the deficit, and lay the foundations that will wean us off our debt addiction and secure the long-term model of export and trade-led growth we badly need. This Autumn Statement is about demonstrating that “Osbornomics” – keeping interest rates low, sustaining government science and infrastructure investment, and working towards a rebalanced budget – is not just about avoiding economic Depression. It’s about building a new and more resilient model of growth.

The crash of 2007-8 signalled the end of the post-war model of ever-bigger government, Macmillanite “never had it so good” consumerism, and booms in the City and housing. Now we must tackle the UK’s structural deficit, which won’t disappear with economic growth.

But to do this, we have to deal with the structural inefficiencies in the public sector. We need to adopt the same virtues and disciplines which allow the private sector to generate year-on-year productivity gains: embracing new technology and innovation, rewarding success not failure, and a culture of enterprise. We need to tackle the structural inefficiencies of “one-size-fits-all” big government, Whitehall silos, the stale public good/private bad apartheid which has bedevilled the UK, and let the private and public sectors work together to mutual benefit. But how?

Take healthcare. Before coming to Parliament, I spent 15 years investing in new medical technologies. We could never get them into the NHS because, in a politicised organisation, it is always easier to cut budgets for innovation than to cut waste. That’s why the NHS’s national health outcomes comparators have fallen so low. But I also saw how, in the most innovative hospital trusts, clinicians, companies and universities are developing partnerships to make the NHS a testbed for medical innovations, often at zero cost. And when proven to work, they can be commercialised. The truth is the NHS will make or break us. It can only survive by becoming more open to working with startups pioneering the new technologies it needs, but can’t afford to buy at retail price.

The same is true across Whitehall. We need every department using its procurement budget to support innovation. Lets use transport, infrastructure, welfare, education, pensions, waste, and energy spending to work with private sector partners in a similar way. We will only tackle the twin challenges of our structural deficit and need for new revenues by making Britain – public and private sector – the crucible of new technologies that will transform our productivity and drive new export markets. I call it the Innovation Economy.

But this will mean Whitehall thinking less like a FTSE 100 company and more like a startup. Take our aid budget. Rather than seeing aid as a hand-out, we should reclassify it as a business development budget: helping to develop markets for our goods and services. The top 20 emerging economies are growing at 7 to 8 per cent per annum. But despite UK trade delegations like today’s to China, UK exports to the Bric economies only made up 7 per cent of UK exports in 2011, with China comprising 3 per cent.

Take Kenya, a country we have long historic links to. The Department for International Development spends millions on aid. UK Trade and Investment and the Foreign Office spend millions on trade. How about a joined-up business plan for how we could use these investments to ensure it is UK firms that benefit from growing markets for construction, agriculture, energy, healthcare, professional services, and finance?

We are borrowing about £3,200 every second. This is no time for fiscal loosening. This is an Autumn Statement in which the Iron Chancellor – successfully fighting against the bond vigilantes to keep gilt yields low and beginning the work of clearing one of the largest fiscal deficits in the developed world – must become the Innovation Chancellor, boldly setting the course for a long-term cycle of sustainable prosperity. Not Labour’s plan for higher deficits, more debt and taxes. But an Innovation Economy in which we trade our way out of debt, by using this fiscal crisis as a chance to embrace a new spirit of entrepreneurship and innovation, across the public and private sectors. We don’t just need a government for enterprise, we need a more enterprising government.

George Freeman is Conservative MP for Mid Norfolk, and author of the 2020Conservatives Innovation Economy Commission, which publishes its Manifesto in the spring.