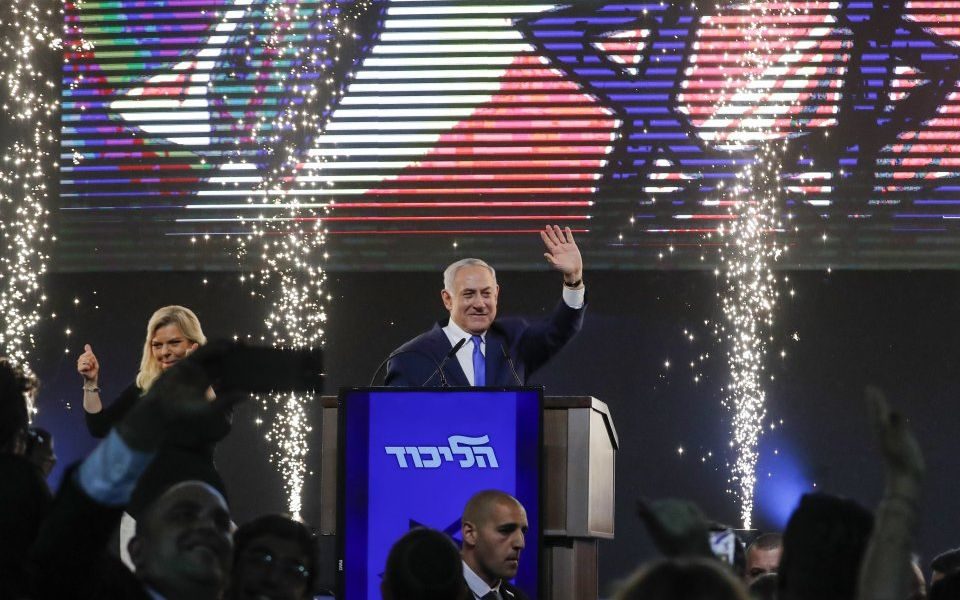 It would be fair to say that Benjamin Netanyahu is not high on the list of many people’s favourite politicians.

Bibi, as he is known, rarely engenders cheers of joy when he bounds onto television screens presenting his latest commentary on Israel’s turbulent neighbourhood, often with forensic PowerPoint presentation in hand.

Yet against all odds, Israel’s great political survivor pulled off a stunning victory at the polls on Tuesday.

In the teeth of a corruption scandal that has seen Israel’s attorney general propose his indictment, and facing the strongest political challenge for his crown in years, he emerged unscathed and with a larger potential coalition majority than his last administration – indeed, with the largest vote share for his Likud party since 2003.

Assuming the negotiations proceed as expected, he will shortly surpass the legendary David Ben-Gurion as Israel’s longest-serving Prime Minister.

To those of us in the UK, trapped in the paradigm of the 1993 Oslo Peace Accords which have dictated international policy towards Israel and the Palestinians for over 25 years now, this might seem an unfathomable result.

Bibi has paid little more than lip service to the idea of a two-state solution, and his recent pronouncements about annexing West Bank settlements would seem to suggest that peace with the Palestinians is a long way down his agenda.

For him to be re-elected, therefore, appears to be a complete repudiation of the peace process that we have signed up to support.

But the reality is that there is no longer a peace process worthy of the name that an Israeli leader can endorse with any credibility.

The story of the negotiations of the past quarter-century has been one of constant and increasing Israeli concessions in an attempt to get the Palestinians over the line of peace, and Palestinian rejectionism in response.

The last time a major deal was presented – in 2008 when Ehud Olmert offered up the keys to Jerusalem, the internationalisation of the Old City, and a symbolic “Right of Return” of Palestinians to the Israeli state on a platter – the Palestinians did not even deign initially to provide a formal reply.

It is not hard to understand why. The pattern of negotiations has shown a ratchet effect, with each new round not starting from the status quo ante, but from where the previous failed negotiation ended at. For a Palestinian, waiting it out to the next deal therefore becomes a very tempting proposition.

Not that the Palestinians can agree on a position, of course.

For over a decade, they have been divided politically between a kleptocratic gerontocracy in the West Bank – where Fatah’s 83-year-old Mahmoud Abbas, now in the fourteenth year of a four-year term, holds sway – and the Hamas terrorist regime in Gaza, which was originally elected but then retained power in a coup.

The Palestinians have been unable to negotiate national unity themselves, so the idea that they could reach agreement with Israel – even if they wanted to – is remote.

Yet through all this, we have allowed history to stand still. Oslo remains the paradigm with which to view the conflict, even though both lived experience and the facts on the ground have radically altered.

Israeli settlements are often cited as the cause of the peace roadblock, but these are a legacy issue from the 1967 Six Day War. They have not been the foundering point in any of the many failed peace deals that have fallen by the wayside. The principle of land swaps and abandonment of more isolated settlements as part of any agreement has been well established.

Rather, it is the 1948 issues of Palestinian refugees and the status of Jerusalem – which stem from the refusal of the Palestinians at a core level to accept the very existence of the Jewish state – that are responsible for the failure to progress peace.

Israeli voters have realised this, which is why this election was not fought on peace process grounds. Western observers have not.

It is time we did too, and followed the example of Donald Trump.

The US President’s moves to recognise the reality that Jerusalem will always be Israel’s capital, and that a UN organisation like the Relief and Works Agency for Palestine Refugees in the Near East perpetuates rather than resolves Palestinian refugee status, show that he understands that it is essential we do not become prisoners of time.

Netanyahu sensed these changing tides of history, and moved with them. With the much-vaunted Trump Israeli-Palestinian Peace Plan about to be unveiled – and with uncertainty about its contents – Israelis plumped for a strong, internationally recognised Prime Minister who could build on his existing relationship with the President, or go toe to toe with him if necessary on potential areas of concern.

Neither politically lightweight generals or looming trials could alter that equation, which explains why Bibi is once more – as his supporters delight in chanting – the king of Israel.

£ Alan Mendoza is executive director of the Henry Jackson Society.