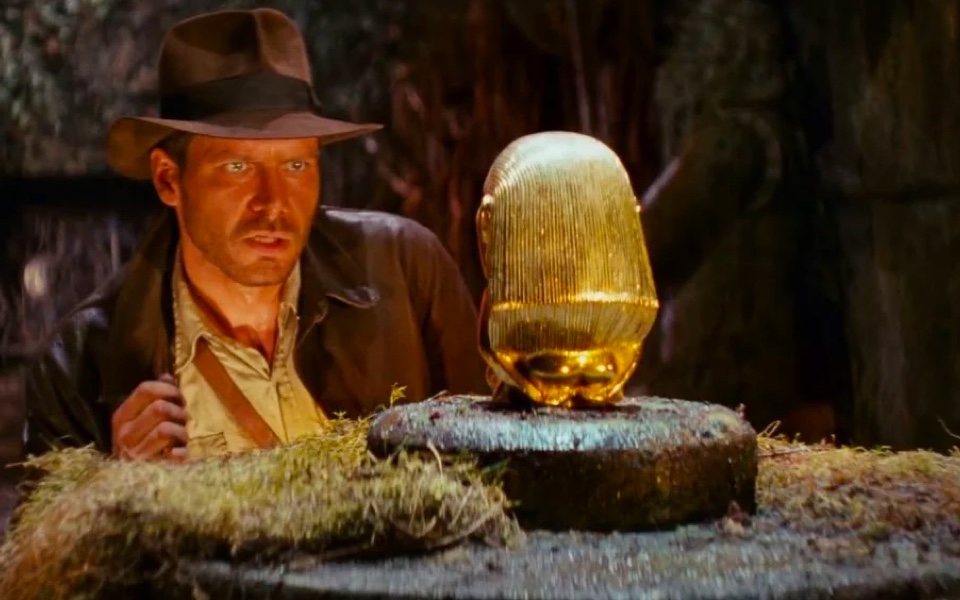 Next month will be the 40th anniversary of Indiana Jones and The Raiders of The Lost Ark. In that time, Harrison Ford’s gruff archaeologist has been the focus of a number of spin offs, tie-ins, and home video releases. It’s a testament to the enduring appeal of the character that there is still appetite for more adventures. Ford and director James Mangold (Logan) are working on a fifth film, due next year, while games studio Bethesda (Skyrim, Fallout) are working on an open world video game.

With all that in mind, it seems a good time to revisit the original movies via a new boxset which, for the first time, features all four films in 4K Ultra HD, in a nine-disc set which also includes Blu Ray versions and a disc full of extras.

The real magic of Indiana Jones is captured in the first and third instalments, 1981’s Indiana Jones and The Raiders of The Lost Ark and 1989’s The Last Crusade. Raiders, which marks its fortieth anniversary next month, is a masterpiece of blockbuster filmmaking, creating a charming but curmudgeonly hero that gets swept up in a race to find The Ark of The Covenant.

With memorable allies in tough bar owner Marion Ravenwood (Karen Allen) and the ebullient Sallah (John Rhys-Davies), it’s a New Hollywood spectacle with Old Hollywood sensibilities, and in Steven Spielberg a filmmaker at the height of his powers. Last Crusade recaptures that magic, reuniting Indy with Sallah as he looks to rescue his father (Sean Connery), an expert in The Holy Grail. The Nazis are a bit more cartoonish, but the action is spectacular. Connery adds spice to the mix, becoming both partner and foil to Ford as a distant father who might have enjoyed a few adventures of his own.

Of course, there are The Lesser Adventures. Time has been kind to 1984’s Indiana Jones and The Temple of Doom, which was viewed as too fast and too dark for audiences at the time. It’s certainly different from Raiders, focusing on Indy as a Bond type hero and featuring gross-out effects that weren’t associated with the series elsewhere.

Anyway, it’s Citizen Kane when compared to Indiana Jones and The Kingdom of The Crystal Skull (2008). With most of the beloved supporting characters missing, and a loathed new addition in Shia Labeouf’s Mutt Williams, a 66-year-old Ford hooked up with old flame Ravenwood to chase a telepathic crystal skull connected to aliens (yep). The cast try their best, but there’s a reason it is held up as the prime example of a sequel too far. Like the worst Star Wars movies, it feels like an impression of what came before, rather than adding to it. And the less said about the swinging monkeys, the better.

Super fans will be delighted with what is a sharp 4K Ultra HD remaster. Great care has been taken to make every element sharper, the colours richer, and the Dolby Atmos sound bringing out the memorable score and award-winning sound editing.

It’s a franchise that has already had two boxsets, 2003’s DVD release and 2012’s Blu Ray conversion, not to mention the films’ availability on streaming platforms and TV repeats. Therefore, this definitive edition may be for the completists, but if you are someone who needs to see their favourite films in the best quality possible, this provides what you need.

Once upon a time, a new boxset would come with hours upon hours of new behind the scenes extras to pore through. The home entertainment landscape has changed, and while there are plenty who still hold physical media dear, the demand for extras is not what it was. That’s reflected here, with a disc full of extras that were also available on the 2012 Blu Ray box set. While there are an interesting array of behind the scenes featurettes, one would assume that the enthusiasts for whom this is a must buy will also have the previous edition, meaning these extras don’t hold much appeal.

Overall, The Indiana Jones 4-Movie Collection gives the series an impressive visual polish, that will be appreciated by people with the right set-up and enthusiasm. If you’ve spent your life marvelling at the exploits of cinema’s favourite archaeologist, it is the best way to enjoy these classic adventures.

The Indiana Jones 4-Movie Collection is available on 4K Ultra HD Blu-ray™ and on Digital to Download & Keep from the 7th June.