The IMF has warned countries across the world face a prolonged period of low economic growth, due to the effects of an ageing population, and urged governments to take the steps necessary to combat this.

"In advanced economies, this decline started as far back as early 2000s and worsened with the global financial crisis. In emerging market economies, in contrast, it began only after the crisis," the IMF said.

This is because labour and capital input, which are both drivers of an economy's potential output, or how much it can grow without sending inflation soaring, have expanded more slowly after the global financial crisis.

The findings, which are included in an advance chapter of the IMF's bi-annual World Economic Outlook, support economists who argue we're currently contending with "secular stagnation". 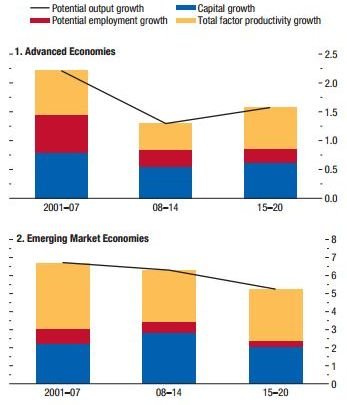 While the IMF expects economic conditions will lead to an increase in investment, the labour force will struggle, due to an ageing population and more workers retiring.

In recent years emerging economies were lifted by both technological and educational improvements. Going forward, they'll still be able to get strong growth building on these areas, however the returns will be less.

And while advanced economies will see productivity growth return to recent rates soon "the rapid pace of expansion seen in the late 1990s and early 2000s—fueled by the exceptional information-communication-technology boom—is unlikely to be restored."

It said that if countries fail to encourage innovation, promote investment and counteract the negative effects of an ageing population, they'll be faced with a low ceiling for future rates of economic growth.

As such, it urged governments to embark on a range of measures, like greater support for research and development, boosting educational attainment at both secondary and university level and structural reforms for emerging economies.