If Trump reaches a hand across the aisle, Democrats would be wise to take it 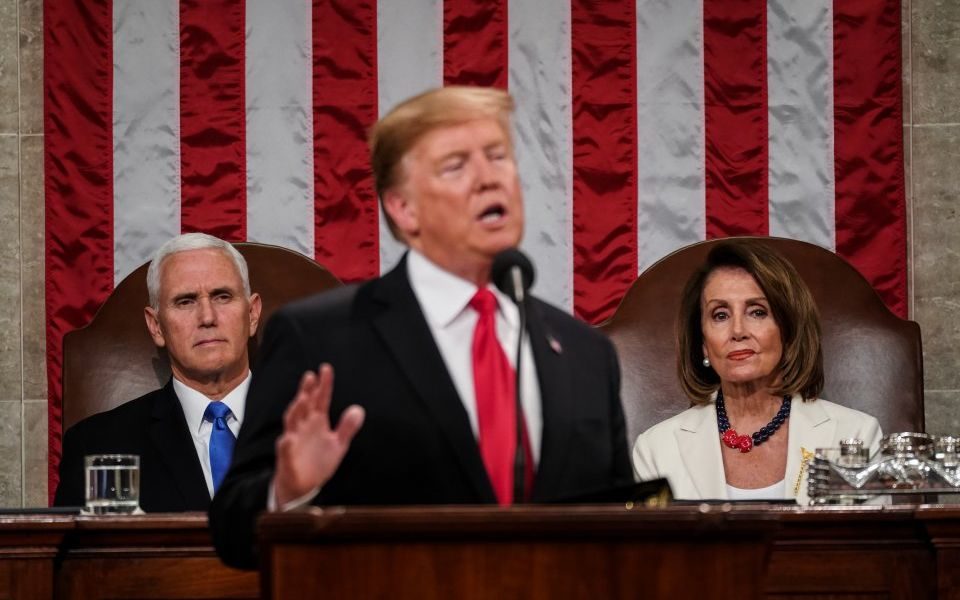 For a brief moment on Tuesday evening, the customary rancour of US politics was set aside in a most unusual spontaneous display.

To everyone’s surprise, President Donald Trump’s delayed 2019 State of the Union speech – which had itself become a political football in the struggle between a Democratic House of Representatives and a Republican President – provided a glimpse of how American political life once was, and could yet still be.

The snapshot took place around 40 minutes into the speech.

Having just reiterated his divisive pledge to build a wall on the US border with Mexico, which was received with stony silence by the Democrats in the chamber, Trump glided into safer territory on the economy, telling his audience that women had filled 58 per cent of the new jobs created in the last year.

Female Democrats – clad in white to show solidarity with the centennial of the suffragette movement – paused for a moment to take that statistic in. And then couldn’t resist standing and applauding.

Even Trump looked relieved that the tension in the room had dissipated, quipping “you weren’t supposed to do that”.

The sad reality is that it was not so long ago that Republicans and Democrats were able to applaud each other’s statements on set-piece occasions like these with regularity.

When Ronald Reagan and Tip O’Neill occupied the roles in the 1980s that Trump and House speaker Nancy Pelosi hold today, divided government meant disagreeing – sometimes vehemently – with each other’s policies, but recognising that there were points of commonality on both sides of the political aisle that could be supported.

Subsequent periods of divided government, under Presidents Bill Clinton and George W Bush, saw increases in partisan rancour – including the previous record for a federal government shutdown and the Iraq War fall-out.

But the basic line still held: the legislative and executive branches could oppose each other professionally, but still recognise that they were working in the American interest and react accordingly.

Even the Obama administration, which saw bitter partisan divides, was marked by Republican applause at the State of Union.

All this broke down when the most divisive presidential candidate in modern US history won election in 2016.

For his past two years in office, Trump has made clear that he thrives on political discord rather than harmony, going out of his way gratuitously – in particular on social media – to lambast and humiliate opponents.

It is therefore tempting to say that he is reaping what he has sown through his own behaviour, and that the next two years of divided government will revisit on him the same disdain that he was happy to dole out when the House was under Republican control.

Tempting, but shortsighted. Because a rather different Trump was on display on Tuesday night to the bombastic character seen hitherto.

The President went out of his way to appeal for national unity, imploring Congress to “reject the politics of revenge, resistance and retribution, and embrace the boundless potential of cooperation, compromise and the common good”.

He even went so far as to display gratitude – a hitherto unknown emotion in the Trumpian vernacular – in response to the Democratic standing ovation.

Perhaps it was just grandstanding – but perhaps not. It might be the awakenings of a shift in policy that means divided government may not signal inevitable gridlock.

It is entirely possible that the Democrats will miss the opportunity in front of them. After all, Trump remains in essence, Trump.

The Mueller Inquiry drags on, with its outcome uncertain. There will be an inevitable hankering to take revenge for the humiliations of the past two years in the belief that frustrating the President’s agenda will deliver a Democratic presidency in 2020.

But Democrats seduced by this path should be wary. It appears that the American people liked the Trump 2.0 approach. A CBS poll taken straight after the State of the Union suggested that 76 per cent of Americans who tuned in approved of the speech he gave, while just 24 per cent disapproved.

Considering that the President had been widely blamed for the federal shutdown, this is quite a turnaround. The Democrats secured a great triumph in getting Trump to back down temporarily on his aggressive demands for wall funding. But could they be about to turn that into a Pyrrhic victory?

We will not have long to wait. Trump has promised to renew his funding call, and to engage in another shutdown if it is not delivered.

So House Democrats can choose to play public opinion roulette again, or offer to meet him halfway. After all, many of them were for border controls before they were against them.

It would be a shame for them to forget this. And an even greater one if they failed to take an opportunity to teach a newly emollient President that compromise is sometimes in the American interest.