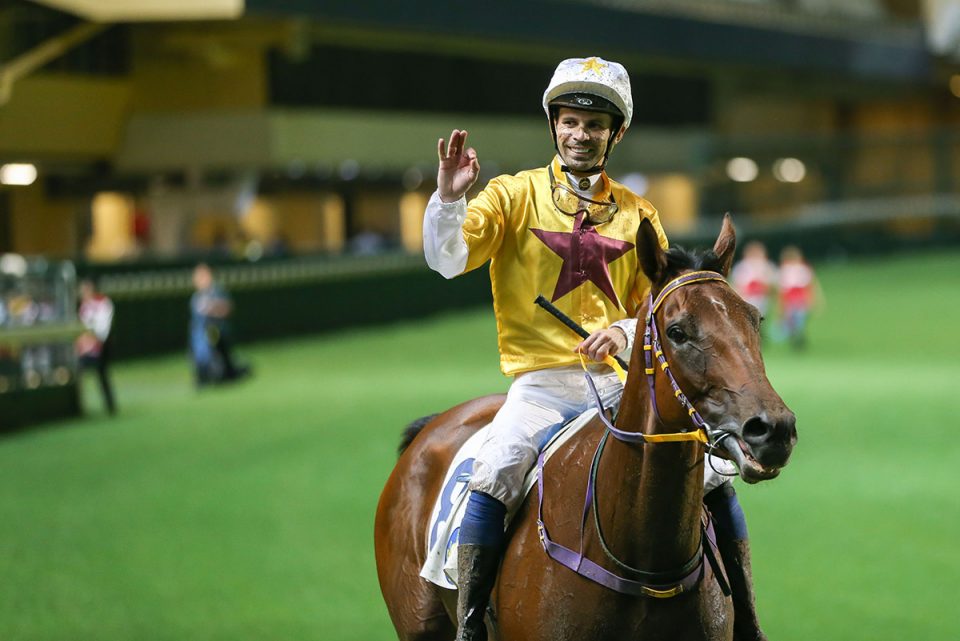 FORMER South African champion Aldo Domeyer could be the jockey to follow at Happy Valley this afternoon.

The likes of Zac Purton, Joao Moreira and Karis Teetan will continue to hog the headlines, given they rode seven of the ten winners at Sha Tin last Sunday, but 32-year-old Domeyer has a chance of stealing some of the limelight from his more illustrious rivals.

Domeyer made an immediate impact when joining the HK jockey ranks last May, riding a double on his first appearance at the tricky Happy Valley circuit.

He ended his 10-week licence for the season by riding an impressive 13 winners, including a treble, again at the city track, in July.

He has already chalked up four winners this term and that’s despite serving a four-meeting suspension, so he looks a man to follow and should be more than capable of holding his own against some of the top riders in the world.

Domeyer has his card marked in a handful of races this afternoon and all of them can be given a chance of at least making the frame.

His best chance of success could come in the Hanshin Handicap (1.45pm), when he climbs aboard the Tony Millard-trained C P POWER over the extended mile.

As mentioned last week, Millard is a trainer to follow in the month of October. The former South African champion trainer collected 34 winners in HK last season, of which nine came this month.

He landed a double at Sha Tin nine days ago and then saddled a 175/1 winner last Sunday, so he’s clearly coming into form at the right time.

Millard and Domeyer have already tasted success together this season and now combine with C P Power, who won off a similar mark over the course and distance last season.

His seasonal pipe-opener, a fast finishing third to Green Dispatch last month, suggests he will be at his peak and from a positive low draw, he should go close.

Domeyer may have already got on the scoresheet earlier in the afternoon, when renewing his association with top-weight EVERBRAVE in the six-furlong Nakayama Handicap (12.45pm).

The combination suffered bad luck in-running when pushed wide turning into the straight and then dashing too late to catch rival and surprise winner Hardly Swears over five furlongs at the Valley early last month.

From a good draw and a 5lb advantage for a half-length defeat, they are clearly capable of reversing the form.

With the expected early pace likely to be on the quick side, the Manfred Man-trained six-year-old should be in an ideal position from the off and can make his strong finish count in the closing stages.

Domeyer’s other rides are all worth a mention too, with progressive sprinter Ballistic King looking the form choice in the Tokyo Handicap (3.15pm), though he does have a double- figure draw to overcome.

Dances With Dragon has had an ideal preparation for the main event of the evening, the £200,000 Japan Racing Trophy (2.45pm), and I’d expect him to go off a decent price too.

Finally, don’t discount Speedy Wally in the second race of the day (12.15pm). His recent form suggests he’s back to his best and could cap off a spectacular day for Domeyer.