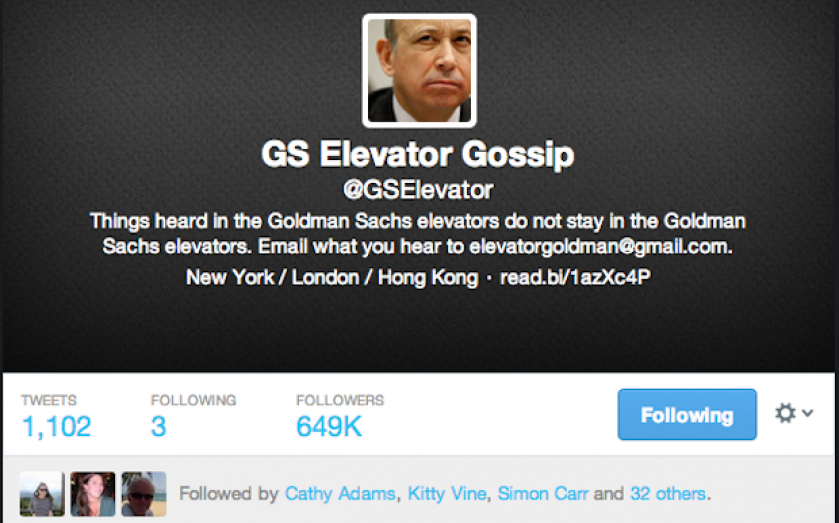 The author of the @GSElevator Twitter feed has had an interesting start to the year.

In January it was announced that the anonymous author of the feed (which famously tweets conversations “overheard” in the Goldman Sachs elevator) had signed a six-figure book deal with publisher Simon & Schuster and would be writing a mud-slinging expose of Wall Street.

Last month he was finally outed as John Lefevre, a former broker living in Texas and not an employee of Goldman Sachs.

He’s obviously had a wild ride since then, because he seems hell bent on setting the record straight and has published an open letter in US site, Business Insider.

First he explains the little clues he was giving away as to his identity:

Many months ago, I tweeted about totaling a new Maserati, which is something that actually happened to me. I should have seen it coming; I was so intoxicated when I bought the car (just 5 days previously) that the dealership had to drive me home in it.

Right after that tweet, I had a few friends email me and say that I must be the person behind GSElevator.

Then he explains why he feels he needs to bear all himself:

Along the way, I’ve never worried about making enemies or becoming a lightening rod for criticism. I’ve always been fine with that; I embrace it…However, in light of recent events, I thought it was prudent to provide a bit of clarity and context around my Twitter account, the book, and me as a person.

He gives his idea of what the Twitter feed is:

GSElevator has never been an anonymous person. It's not a person at all. It's the embodiment or aggregation of "every banker," a concentrated reflection of a Wall Street culture and mentality.

Being anonymous had this enigmatic mystery and intrigue; it protected my privacy, but also prevented me as a person from getting in the way of the message. But to be clear, it was never about hiding.

Gives us more insight into his experience on Wall Street:

I started as an intern in 2000 for Salomon Brothers in London on the Victoria Plaza trading floor of Liar’s Poker fame. My wild ride formally commenced the following year, beginning in the wake of the dotcom bubble bursting, and carrying me across three continents, and through the worst financial crisis in generations.

And here’s the money shot:

So, was I hired by Goldman Sachs? Well, when they offered me the job of Head of Asia Debt Syndicate, it was deemed headline-worthy at the time…Have I been in their elevators? Too many times to count.

More about @GSElevator and why we were silly to believe it:

Newsflash: GSElevator has never been about elevators. And, it's never been specifically about Goldman Sachs; it's about illuminating Wall Street culture in a fun and entertaining way. Without highlighting the obvious evolution of the tweets into more generally-appealing observations, let’s start with the simple fact that each of my tweets says “Sent from Twitter for Mac,” hardly the work of someone pretending to be hiding in the walls of 200 West.

Here’s what his book is going to be about:

The book is not about Twitter; it’s a collection of true stories from my experiences directing traffic at Wall Street’s epicenter – the bond syndicate desk…My seat is like being the catcher on a baseball team. I’m the only person who can see the entire field; I coordinate the calls, and I’m involved on every play. And since most public deals are not sole bookrunner transactions, I have worked exhaustively with every bank on Wall Street; I saw it all.

So of course, I will keep tweeting. I’ve even picked up a few new inside sources (and 25,000 new followers), so like I’ve always said, "Email me what you hear…"