TOURIST and business visits to the UK boomed in the year to August, official figures yesterday showed, helped by the rebound from the Olympics in 2012, when visitors stayed away.

For the 12 months to August, visitor numbers rose five per cent.

Business trips and holidays rose six per cent, and visits to see family and friends increased four per cent. 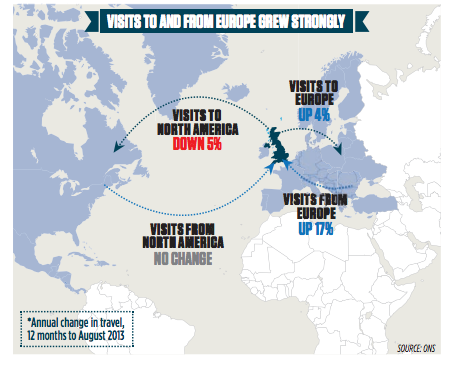 “This suggests that a significant number of people had actually avoided coming to the UK in August 2012 to avoid being caught up in the Olympics,” said economist Howard Archer from IHS Global Insight. “Of course, the better weather that the UK experienced this summer and a slightly improved global economic environment likely also contributed to August’s increase.”

Meanwhile UK residents made 7.7m visits abroad in August, up eight per cent on the year.

And visits in the 12 months to August increased two per cent, driven by a four per cent rise in trips to Europe, countering a five per cent fall in visits to North America.