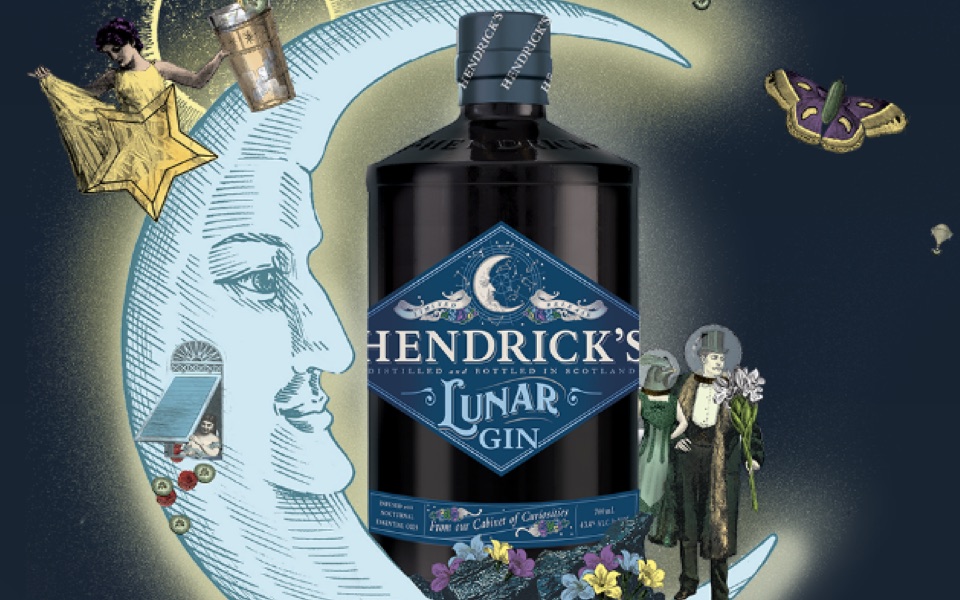 Hendrick’s air of cultivated whimsy would be grating if it were not so consonant with the character of their product. Hendrick’s flagship cucumber and rose-flavoured gin is best known, but in all its varieties, Hendrick’s is inventive, impish, and iconoclastic.

The spirits are produced at a distillery in Girvan, Southwest of Glasgow. The purpose-built Gin Palace embraces the brand’s absurdist Victorian aesthetic, and includes a courtyard complete with penny-farthing bicycles. There are cabinets full of curios and a chequerboard floor that would not look out of place in Alice Through the Looking Glass. But this is not all artifice. The stills may look like steampunk affectations, but they are fully functional, and they include an actual Victorian pot still – built in 1860 – as well as a rare mid-twentieth century Carter-Head still, which has a copper basket for extracting the essence of botanicals.

Speaking of botanicals, the Gin Palace includes a walled garden, and two greenhouses, which produce plants for use in experimental batches. One greenhouse is “Mediterranean”, and filled with an abundance of citrus plants, while the other is “tropical”, and strives to emulate the deep green, humid intensity of the Venezuelan jungle.

Girvan is located in a dark sky area, and it was an unimpeded view of the heavens that gave rise to Lunar Gin. As she tells it, Hendrick’s master distiller Lesley Gracie was standing in the Gin Palace garden one night, bathed in the light of a crescent moon and looking up at the stars. It occurred to her that the aromas of the plants were subtly different than during the day, with “the deep floral and the deep warm spice”. She isn’t just being winsomely poetic here, either. There is real science behind night-scented plants, which have evolved to attract nocturnal pollinators, such as moths, by releasing sweet fragrances at dusk.

That realisation set Gracie down a path to the creation of Lunar, for which the botanicals are harvested at night, to capture their unique nocturnal characteristics. It took 6-8 months to develop the right balance of aromas to match the feelings evoked by the moonlit garden. But this was time well spent for Gracie, who insists that when it comes to making great gin, “It’s about trying to get all of your memories into the liquid.”

Gracie is guarded about the specific botanicals used in Lunar. She explains this reticence, saying that if she were to list them, it might deter people who think that they dislike an individual ingredient from trying the gin, and that would be a misfortune, because the flavours all blend into a unified bouquet.

Lunar is a decidedly pleasant and delicate gin. Juniper is stronger on the nose than it is on the palate, where it is more floral, with suggestions of violet and geranium, as well as something more like fennel or tarragon. The finish is bracing, bitter orange. The subtle flavours initially seem to be at odds with a level of alcoholic heat, which is more intense than its 43.4% ABV might lead you to expect. However, the burn is fully contained within the envelope of flavours, and warms your chest on a cool spring evening.

While you could happily drink Lunar by itself, Gracie says it’s “the ideal thing to get up to lots of cocktail mischief”. Hendrick’s Global Brand Ambassador Ally Martin needed no further encouragement, devising several easy cocktails for you to make at home, which show Lunar in the best light. These include the herbal and refreshing Moonlight Buck, and the bitter and bracing Starry Sky Old Fashioned.

Combine gin, ginger ale, and lemon juice in a highball glass filled with ice. Lightly stir, and garnish with thin slices of cucumber and a twist of lemon.

Pour all liquid ingredients into a rocks glass, over ice. Stir gently, and garnish with an orange peel twist.

For further information, including where to purchase Lunar Gin, see the Hendrick’s website.