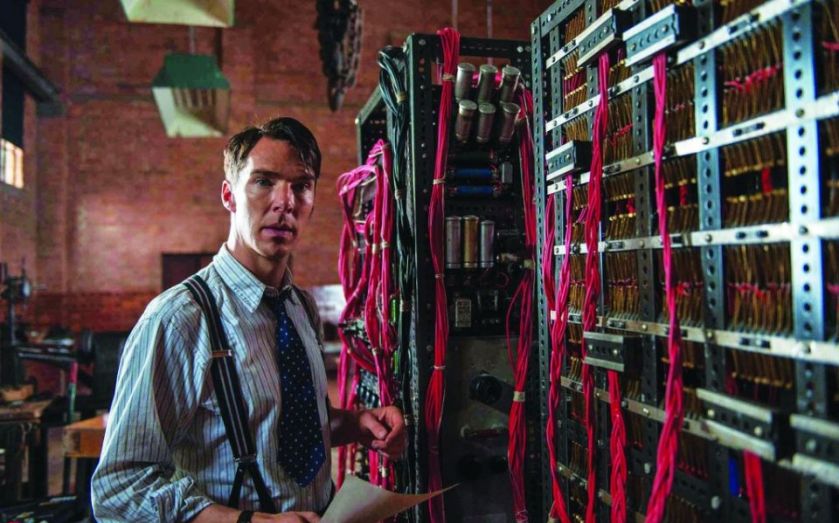 ★★★☆☆ Cert 12a
A riddle, wrapped in a mystery, placed inside an enigma, bound with leather and slotted carefully onto a mahogany book case. That’s what Alan Turing biopic The Imitation Game feels like. For all the wonders of its subject’s mind, the film itself is a staid and conventional affair, with more quality wood furnishings than an episode of the Antiques Roadshow. How much is it worth? Disappointingly little.
Talking of quality wooden furnishings, Keira Knightley gives one of her better performances as code breaking whizz Joan Clarke. Cumberbatch is also good and probably deserving of the Oscar buzz. The performances, like the rest of the film, are solid and respectable, displaying the kind of assuredness you’d expect from an Oxbridge drama society. This is a fine medium for depicting Turing’s triumph – the cracking of the German Enigma machine – but proves toothless when depicting his tragedy. In 1952, Turing, a hero whose code-breaking shortened the war by an estimated two years, saving up to 14 million lives, was arrested and charged with gross indecency. After admitting sexual relations with another man, he was forced to choose between jail and chemical castration. He chose the latter, and committed suicide in 1954.
The film suggests that the saddest thing about Turing is the fact that he was a bit of an oddball, as if his tragic life story was down to what he was, rather than what was done to him. Yes, he was dysfunctional, but what of the dysfunction of the society that condemns people to prison or castration because of their sexuality?
Director Morten Tyldum has so much fun depicting upper-class tally-ho patriotism at Bletchley that he can’t quite find the words to say that it was this very world that condemned Turing for being gay. The closest the film gets to depicting any actual homosexual love or desire is a few stolen glances across classrooms in the flashbacks to Turing’s school days. In all its period conventionalism, The Imitation Game seems just as uncomfortable with homosexuality as the stuffy world it depicts.
While the dialogue is often crisp and quick-witted, it occasionally lapses into sentimentality. “Sometimes it’s the people that no one imagines anything of that end up doing things that no one can imagine” is repeated wistfully by three separate characters. But for the lack of concision, it’s the kind of cheap wisdom you might find in a fortune cookie.
Still, the lasting impression left by the Imitation Game is one of expensive, tried and tested quality. Like fine British tailoring, its the kind of film that never goes out of fashion. But surely a biopic of a character betrayed so callously by the establishment should be at least a little subversive.