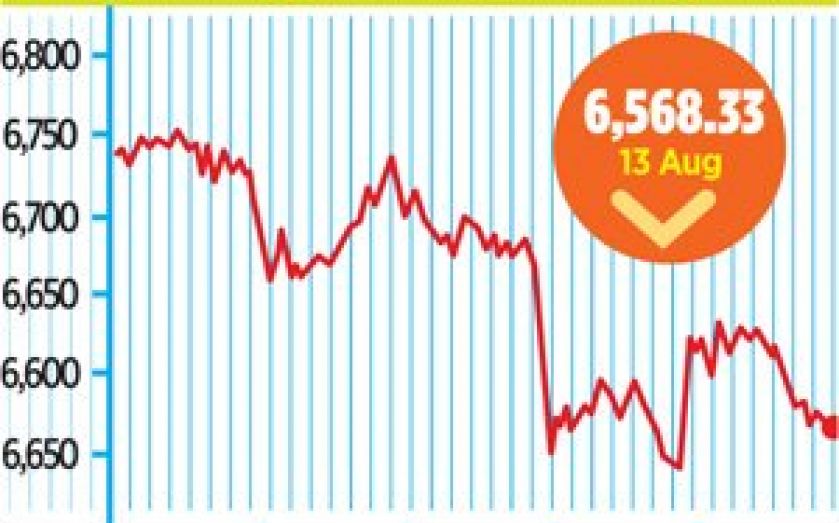 The blue-chip FTSE 100 index closed down 2.86 points – effectively flat in percentage terms – at 6,568.33, trimming the gains seen earlier in the session and underperforming broader European equities.

The index had fallen by more than two per cent in the previous two sessions, hit by Beijing’s devaluation of the yuan.

However, stock markets rebounded after China’s central bank said that strong economic fundamentals meant there was no reason for the currency to weaken further.

A stronger US dollar and a persistent global overhang of physical oil pushed crude prices lower.

Energy companies took the most points off the index, with Royal Dutch Shell and BG Group closing down three and 1.8 per cent respectively.

“It’s still a bit indecisive, but I think we will see oil moving lower, which won’t be any good news for the energy stocks,” said Chris Beauchamp, strategist at IG.

“They’ve taken it very hard over the last couple of months and that’s probably going to continue to be the case,” he added.

Also dragging down the FTSE were companies trading without the attraction of their latest dividend payment, including Rio Tinto, BT and Pearson.

Rio Tinto fell 3.74 per cent, BT lost 1.53 per cent and Pearson declined 1.29 per cent. Among other fallers, G4S, which runs prisons and protects airports, 5.4 per cent after both Goldman Sachs and Exane BNP Paribas cut their ratings on the stock.

Among the gainers, soft drink bottler Coca-Cola HBC enjoyed its best day on record, surging 7.3 per cent after reporting first-half net profit ahead of analyst estimates. Credit Suisse raised its target price to 1,400p from 1,350p.

“The group’s margins look set to be rather better than we thought for the full year and we raise our estimates accordingly,” Credit Suisse analysts said.

Travel group TUI climbed 6.6 per cent after the company forecast earnings at the top end of analysts’ expectations.

Among mid-caps, Cineworld shares touched an all-time high and closed up 7.4 per cent after the cinema operator said it was marginally ahead of its plans for the year and that the film release programme for the second half of 2015 was encouraging.