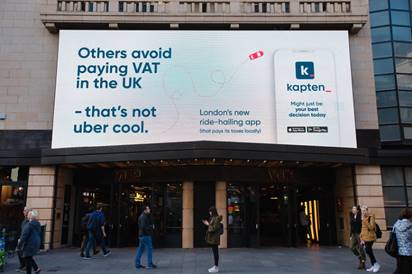 French ride-hailing app Kapten has taken a swipe at Uber after launching in London this morning.

The private-hire vehicle company, formerly called Chauffeur Prive, has set up shop in the capital after winning approval from Transport for London.

The firm, which is backed by German car giants Daimler and BMW, has also mounted an out-of-home advertising campaign as it looks to take on rival firms such as Uber.

The advert, which appears at sites across London including Leicester Square, takes aim at the US ride-hailing giant for its failure to pay local taxes.

“Others avoid paying VAT in the UK, that’s not uber cool,” reads the advert.

Kapten will operate in zones one to five in the capital, and the company has vowed to offer average fares 20 per cent cheaper than competitors.

Kapten was launched in Paris in 2012, and also operates in Lyon, Lisbon and Geneva.