Flower in the City: The Tulip could be the tallest tower in the Square Mile 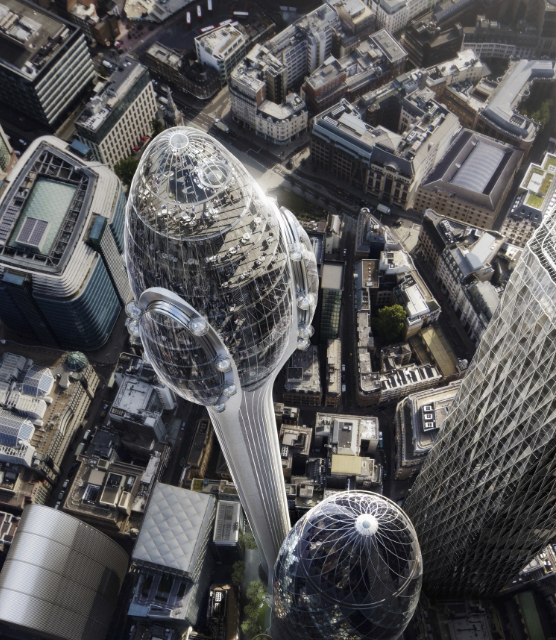 New proposals to build the tallest ever tower in the Square Mile were revealed this morning, as City planners prepare to open their doors to a fresh wave of skyscrapers that could transform London’s skyline.

Developers have submitted plans to build a dramatic 305-metre viewing attraction dubbed ‘The Tulip’, which would be built alongside The Gherkin in the heart of London’s financial district.

Unlike its neighbouring skyscrapers throughout the Square Mile, The Tulip, which is just one metre smaller than the Shard, has not been proposed with office space in mind.

Instead, the building would act as a “new public cultural and tourist attraction” to draw in visitors and schoolchildren to the City.

It is one of the most ambitious proposals to be put forward to the City of London Corporation since the historic body unveiled its draft plan late last month to allow for more skyscrapers in the Square Mile’s eastern cluster.

Appetite to relax the financial district’s development laws has mounted in recent months amid growing corporate demand for commercial property within the Square Mile.

City planning chief Chris Hayward told City A.M.: “One might’ve expected a reduction in demand and a tailing off in planning applications, but we’re seeing little change in demand for development in the Square Mile – its very strong and all our research underpins that as well.”

Hayward added: “We want to make the next generation of buildings play to the more discerning younger city workers, and we want to cater to the changing occupier base. Historically it has only been financial and professional services in the City, but with new entrants like media and fintech, we are moving to a 24/7 City which has captured the imagination of a lot of developers and investors out there

Among the current skyscrapers under development are 22 Bishopsgate – known as Twentytwo – which has already secured tenants such as insurers Hiscox and Beazley.

According to the New London Architecture’s most recent survey, London had more than 500 towers in the pipeline in 2017, compared with 455 in the previous year.

Peter Murray, chairman of New London Architecture, said: “Developers do seem to be very positive about the City of London at the moment. In spite of Brexit, the developers I am speak to think that by the time these sorts of buildings are finished, the City will be back on track.”

“The City is really packing these building in at the moment, and we are seeing a greater concentration within the eastern cluster. There is a gap between the Walkie Talkie and the rest of the cluster that is crying out for someone to put buildings into it.”

The City of London is also the only borough to have an average height of more than 40 storeys in London.

If planning permission, put forward by J. Safra Group and Foster & Partners (owners and architects respectively) is given the green light, construction would be set to begin in 2020 with the project completed by 2025.