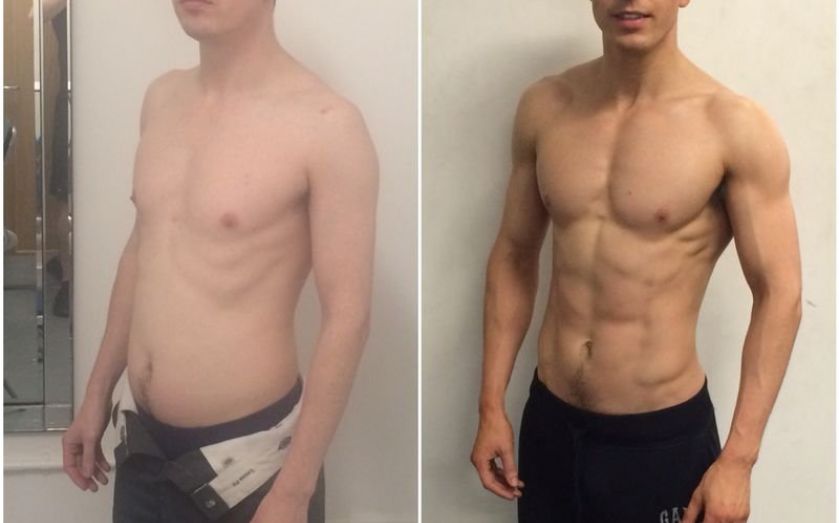 Everything I thought I knew about getting fit was wrong. Go running, avoid fat. Wrong, wrong, according to my trainer. And after my 10 week programme (eleven and a half factoring in holidays), I’m not inclined to argue.

The results of my “total body transformation” were more impressive than I’d thought possible three months ago. The change was so sudden that reactions to the “before” and “after” pictures have included: “Wow, you learned to use Photoshop” and “Did they paint your abs on?” So, in the name of full disclosure:

• I got a tan for the “after” photo, which gives you more definition.

• The “after” photo was taken post-workout, which means your muscles are pumped and you look bigger.

But there is muscle where before muscle had refused to grow. I have traps and serratus ( the muscles that grow over your ribs). My body-fat percentage has dropped from 18 (“average”) to 12 (scraping into the “athlete” range). The caliper reading on my belly fat has dropped from 17mm to just 7mm. I’m not saying it was easy, but the No.1 Fitness regime made it as painless as possible.

I worked out four times a week with Harry Thomas at his gym beside the Gherkin (he also has gyms at Tower Bridge and Canary Wharf; on the odd occasion he was unavailable another trainer was substituted in so I didn’t miss a session). Here’s how it went:

The first three weeks were embarrassing. There is no cardio involved in the programme – I didn’t go for a single run – only free weights and body-weight exercises. And I’d never lifted a weight in my life. Harry would tentatively ask me to lift the lightest weights before realising just how weak I was and settling for me lifting an empty bar. I could do neither a tricep dip nor a pull-up. Thankfully, four sessions a week yields fast results. Week four was a revelation; weights that were beyond me became easy and muscle started to grow. The acclimatisation period is made bearable by the fact the gym is by appointment only, so you’re only ever in there with half a dozen or so other people. After a while, it becomes addictive, especially upper body work like bench presses. Leg work outs, though, never get easier.

For the first two weeks of the programme I was banned from eating any carbs or sugars. Alcohol was banned throughout. Perhaps unsurprisingly, the first two weeks were the most dramatic in terms of my body changing. The fat dropped straight off: I became thin instead of slim; unhealthy-looking, really. Forgoing sugar really makes a difference. My diet consisted of high-protein foods; lots of eggs, chicken and fish. After two weeks I re-introduced non-starchy carbs like sweet potato and beetroot. My biggest problem throughout was eating enough protein to fuel the muscle growth – shovelling down five or six scrambled eggs every morning became a chore, and carving out time to eat a half a chicken in the afternoon was difficult, not to mention expensive.

I also drank two protein shakes a day and took 5g of Creatine, which allows your muscles to absorb more water and makes you look bigger.

For the final two weeks of the program, I cheated and used Muscle Kitchen,  a company that delivers personalised meals for your entire day from £25 a day. The high protein food (lots of chicken and fish with sweet potato, poached eggs, chili con carne, even sugar-free flapjack) was far nicer than anything I was preparing and meant I didn’t have to spend time cooking (info@musclekitchen.co.uk, 0845 094 9169). 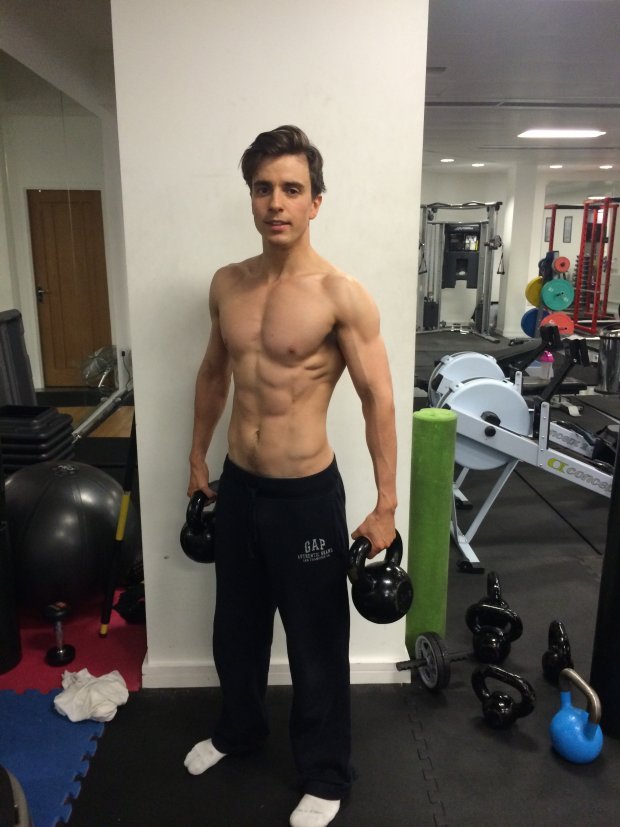 Something I didn’t fully consider before I started is that, while it’s called a “total body transformation”, for me at least it was more than that – it was a total lifestyle transformation. This comes with both benefits and difficulties. I knew before I started that there were friends I would scarcely see while I was off the sauce but I didn’t reckon for the problems it would cause closer to home. It caused countless arguments with my girlfriend, who lost a spontaneous boyfriend who enjoyed Sunday afternoons in the pub and gained a stranger who was tired by 10.30pm and spoke only about deadlifts and lateral raises. It also made me rather vain – when your body changes week-on-week it’s hard not to check yourself out in the mirror.

On the flip-side, it’s made me realise how much my social life revolved around alcohol, or, worse, the resulting hangover. Without drinking on Friday and Saturday nights I gained entire days.

While I never really noticed the increase in concentration I’d hoped for, after a few days celebrating (read: drinking) when the programme was finished, I noticed a huge dip in my attention span. In fact, for a week I completely reverted to type, and the general feeling of sluggish apathy that crept back was so jarring that I joined a gym, and have been almost every day since. There were days during the programme when I wanted to have a cry and call it a day but I stuck it out – my commitment came as a surprise even to me. Now I hope the  memory of all the hard work will keep me going: how awful would it be to have wasted all that effort, all those mornings sweating when I could have been sleeping.

I would never have got close to where I am now without Harry, but after all those hours with a trainer I should now have both the fitness and the knowledge to keep it up alone. And I have a confession to make: I kind of enjoy it. I’ve turned into one of them. Oh, god.

Q&A with No.1 Fitness Personal Trainer Harry Thomas, who has been in the fitness industry for over 8 years

Will the 10-week transformation work for everyone? Provided you adhere to our advice, 10 weeks can definitely deliver amazing results. If you can’t commit to four sessions a week, we find that 12-16 weeks is a more realistic time period. But it’s down to the individual: the clients who have achieved the best transformations with us have all been super disciplined and focused all the way through, and these results speak for themselves.

Are the programmes the same for everyone? No, each programme is tailored to the individual. Clients come in with different starting points and fitness levels so we adapt our approach accordingly. However we do have certain procedures that we always adhere to, such as weekly photos, regular measurements, variation in exercises and constant checks on nutrition intake

Do people tend to keep it up afterwards? We tend to find clients do tend to slack off for at least a week after something intensive like this, but they soon realise how much they now need this in their life, and also how badly their bodies respond to bad food after being so clean for so long.

Do you stick to a regime like this yourself? I do, I eat well 90 per cent of the time. It's something I tell everyone joining the team at No.1 Fitness: it’s imperative that we practice what we preach – we can’t expect clients to follow our advice if we don’t do it ourselves.  I always get in at least four training sessions a week and try to vary all my workouts, I also play a lot of golf and football.

What are the three best pieces of advice you would give to someone starting a transformation like this? Block out time in your diary – give yourself the time and attention you deserve. Don't start a package if you are constantly travelling and have loads of parties you have to go to.  If you are going to do this, you need to do this properly. Have a final date set out from the start that you will do your final photos… Having that goal to work towards is one of the most important things. Yes it is going to be a challenge, especially resisting certain foods and alcohol, but in the grand scheme of things, 10-12 weeks is not actually a long time at all.  Stay focused, fight the temptations, don't make excuses and believe that you will get the results even if you do not feel like you are getting anywhere.  I promise, stick with it, and you will succeed.