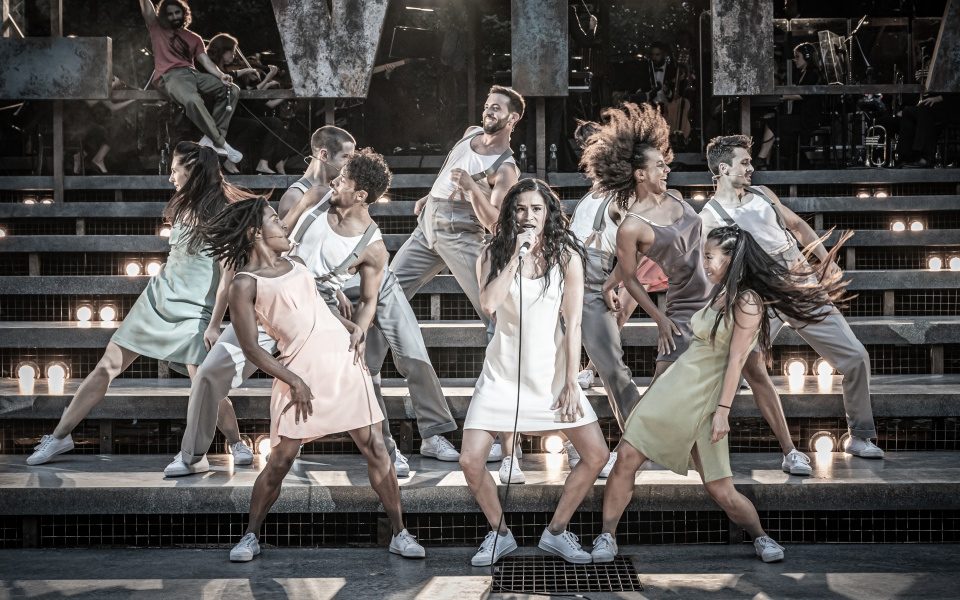 The Regent’s Park Open Air Theatre is ending this summer’s season with a bang – quite literally.

Within five minutes of this new production of Evita – the Andrew Lloyd Webber musical about the rags-to-riches story of Argentina’s 1940s first lady – the audience is jolted by fireworks, towers of flames and football-match-style flares.

It sets the tone for a production that’s bold, punchy and demands attention. Samantha Pauly plays a wonderfully worldly, calculating Eva Peron, free from the blonde wig, red pout and diamonds that are synonymous with Madonna’s 1996 film version.

Director Jamie Lloyd injects dark wit into a story that’s traditionally been played straight, adding a sardonic line here and a clever stage direction there. Giant balloons and confetti cannons add whimsy, contrasting with the stripped-back stage and costumes, which give the production a thoroughly modern feel. The choreography is sharp, contemporary and worryingly complicated, considering the show is performed on a row of slippery-looking concrete steps.

The production also does away with the countless costume changes associated with the movie (Madonna still holds  the record for most costume changes in a film at a staggering 85, or roughly one every 90 seconds). Instead, Eva wears a white dress, which is daubed with spray paint in various colours to reflect the countries with which Argentina attempts to form alliances.

Props must be given to Trent Saunders playing the revolutionary narrator – and de facto voice of Eva’s conscience, Che. His portrayal of a character worn down by the Argentinian propaganda- and war-machines are incredibly raw, something that’s all the more impressive given he spends quite some time wearing only a pair of boxer shorts.

It’s a fitting finale to an incredible season at Regent’s Park Open Air Theatre, a must see for any musical theatre fans willing to risk a spot of rain.