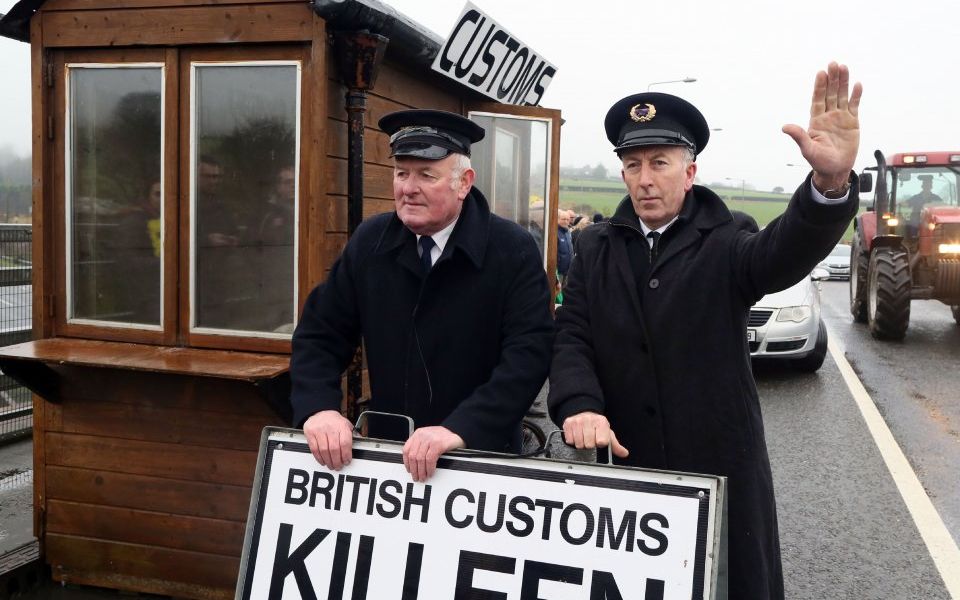 The Irish border issue can be resolved through "the mutual trust on which regular trade depends", a new proposal put forward by pro-Brexit MPs today has said.

The European Research Group's 19-page document suggests existing technology will make border checks unnecessary, while physical inspections can be carried out at exporters' or importers' premises, with exemptions for "the very smallest traders below the VAT threshold".

The level of "repetitive trade" across the border is "well-suited" to technical solutions, while larger companies "may take advantage of trusted trader-type schemes".

The group, which is launching its paper in Westminster today, also recommends "full regulatory alignment" on the island of Ireland "making goods unacceptable for sale in the Republic of Ireland equally unacceptable in Norther Ireland.

There should be "pro-active trading standards inspections at the point of sale" to ensure against non-compliant goods. It also calls for the all-island Common Biosecurity Zone, on sanitary and photosanitary checks, to be maintained, alongside mutual recognition of standards on either side of the border.

But that will not require border checks, the document says. "EU precedent suggests that even where physical SPS checks are necessary, they can take place some 20km from the border itself – as for example Rotterdam."

During the launch, former Brexit secretary David Davis noted the proposals were essentially the max fac proposals he had championed during his time in Cabinet, while former Northern Ireland secretary Owen Paterson said there was "absolutely nothing new" in it.

Davis said: "One of the things about this proposal is that it focuses simply on what used to be called max fac. From August of last year the government maintained two proposals and didn't push one or the other. This [proposal] is saying this is the best way to do it, and that is what we are doing: arguing this on logic, facts and the needs of EU to protect their own market. That is why they should listen to it and why the Prime Minister should listen to it."

Asked why he felt the max fac route, which had been rejected by Number 10 and prompted his resignation in July, would succeed at this stage, Davis pointed to Jean-Claude Juncker's state of the union address this morning, in which he appeared to rule out a Single Market for goods although acknowledged the UK would be more than a third country.

"If you look at what Mr Juncker said this morning it doesn't look like they are going to accept Chequers but what he said is do not see UK as just another third country, that we would be rather more special than that, and that is why we think this will fly."

What does the ERG say on…

The existing border and current technologies

According to [former director of the World Customs Organisation Lars] Karlsson, physical customs posts and even cameras are not essential at borders, and computer-based customs clearing is now the norm across much of the world.

"Arrangements without new infrastructure have been successfully tested on the Norwegian-Swedish border and have only been held back, according to Gudgin and Bassett, because the adequacy of the current systems does not yet merit the cost of new measures. But such methods need not be costly. A 2013 report… noted these costs could be driven down further in future with more efficient automated and digital systems."

"Immigration into the UK from non-EU countries for work or settlement is not and will not be controlled at the border but at the workplace… After Brexit that system can be extended to EU citizens, but with the exception of citizens of the Republic of Ireland… As neither the UK nor the Republic are members of Schengen, there is no reason that this [Common Travel Area] arrangement, which continues to be of immense importance to the economic, social and cultural wellbeing of both jurisdictions should not continue."

"The right approach is to find ways, within current EU laws, which would enable the EU to maintain the integrity of its market, its health and food safety standards and its customs revenues without needing to install border posts or carry out checks at the Irish border. This has been discussed extensively with experts involved in customs, logistics and trade. There are entirely practical measures which conform to EU law for achieving the EU’s legitimate objectives efficiently and effectively without them needing to impose a “hard” border…

"[Barnier] makes clear that checks do not need to be at the point of entry. This principle can surely be applied to the border between Northern Ireland and the Republic of Ireland."

"Smuggling takes place across EU borders in Eastern Europe and the Mediterranean. Moreover, it occurs at present across the border between Northern Ireland and the Republic of Ireland…  Law-enforcement agencies on both sides of the border co-operate to suppress smuggling without anyone suggesting that border posts and checks would make their efforts more effective. If they can tackle trade in drugs, fuel, tobacco and alcohol without infrastructure at the border, they can prevent non-compliant goods from the UK reaching Irish retail outlets in the same way."

Unexpectedly, given the ERG's campaign, criticises both the EU and the UK government for allowing the Irish border to dominate talks and failing to come up with solutions during negotiations so far. "The border is regarded as the thorniest unresolved item over the Withdrawal Agreement," it notes. "There is no case for this, given that no one wants a hard border."

It also gives a hint of further proposals, showing some leg on the Canada-plus-plus-plus model favoured by ERG members such as Steve Baker, and criticising Theresa May's Chequers proposal.

"The UK government failed to pursue Donald Tusk’s proposal for a SuperCanada/CETA+++ Free Trade Agreement on the basis that it provided no solution to the border issue. The government has employed the Northern Ireland issue as the principal justification for the Chequers proposals," it says.

The ERG is upbeat about the ease with which the Irish border issue can be solved.

It says: "The EU will be able to maintain the integrity of its internal market without erecting a hard border along its border with Northern Ireland. At the same time the United Kingdom will be able to develop a fully independent trade policy rather than remaining a rule-taker.

"The one element of ‘alignment’ necessary is the maintenance of the current Common Biosecurity Zone covering the island of Ireland, and this is not contentious."

The proposals have already received the backing of the DUP, the government's confidence and supply partner.

Nigel Dodds, the party's deputy leader, praised it as a "positive and timely development", which makes clear that in the event of a no deal "there are sensible measures which can ensure there will be no hard border".

He added: "It accurately reflects the fact that the border issue is no impediment to the negotiation by the UK of a comprehensive free trade deal with the EU… This party is steadfast in our desire to see a sensible Brexit, which respects the referendum result and which results in no constitutional or economic barriers being created between Northern Ireland and Great Britain."