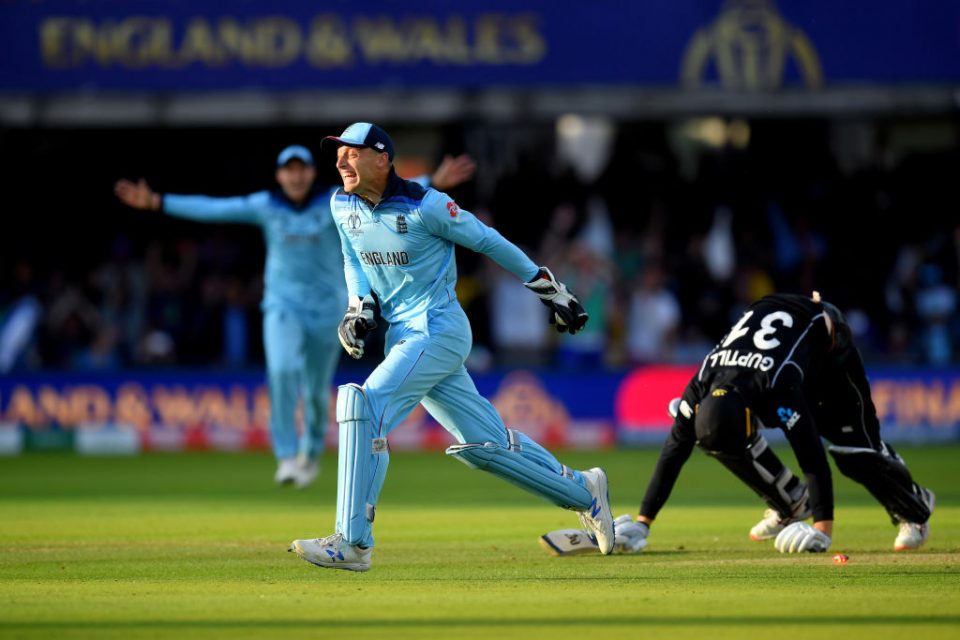 There’s a cliche in sport which says you couldn’t write it.

Generally that’s a fallacy: over thousands of games most situations have seen airtime.

But the fashion in which England won the Cricket World Cup was something unique.

It would be stretching the mind to conjure up the events which somehow came to pass in the final hour of England’s utterly extraordinary encounter with New Zealand at Lord’s.

There was the six which could, and perhaps should, have resulted in the wicket of only hope Ben Stokes, if not for a misstep from boundary fielder Trent Boult in the penultimate over.

And a throw from the boundary, which could have resulted in the run-out of Stokes, but instead cannoned off the back of his bat and went for a crucial boundary in the final over.

And then there was a completed run-out from the final ball of the game which left the scores tied on 241 and brought a super over.

After all that: another tie, with 15 runs scored each, meaning it came down to another final ball run-out and – get this – the home team winning by the niche virtue of having scored 26 boundaries to their opponents’ 17.

“I don’t think there will ever be a better game of cricket than that,” Stokes said after the match finally reached its conclusion. You can’t argue.

What a way for England to win a first World Cup: by the skin of their teeth, in the most dramatic way possible, in front of a packed crowd at the Home of Cricket and on screens all around the country thanks to Channel 4 carrying Sky’s coverage.

There have been plenty of watershed moments in English cricket, but this truly felt seismic, registering 10 on the richter scale of significance, topping the great earthquake precipitated by the 2005 Ashes.

The plot had twists throughout. A New Zealand first innings packed with ups and downs, which left an achievable but not straightforward total.

An England innings which stuttered, recovered through an 110-run partnership between Stokes and Jos Buttler, faltered when the latter was dismissed, looked hopeless when lower order wickets tumbled and was resurrected miraculously through some luck to set up a never-seen-before finale.

Every story needs a hero and here is where Stokes is so perfectly fitting, his character arc topping off an unforgettable day of theatre.

Stokes’s personal strife – drunken fight, team exclusion, court case – has given way in the last year to a new demeanour. A man-of-the-match performance in a World Cup final was his redemption.

Without his new outlook, defined by a cool head, tireless running and powerful ball-striking, his linchpin innings of 84 from 98 balls may never have happened – nor his eight runs from three balls in the super over.

Need more? How about a 24-year-old who wasn’t in the squad – or even eligible to be so – two and a half months ago, bowling the highest-pressure over in English cricket history 72 days after his debut and in just his 14th one-day international.

We should know by now that Jofra Archer is no normal 24-year-old.

He may have bowled a – questionable – wide first ball of the super over. He may have served up a legside half-volley for Jimmy Neesham to smack into the stands. But when it mattered, when New Zealand needed five runs from the final three balls, he backed himself and delivered to a plan. Jason Roy’s throw and Buttler’s quick-thinking did the rest.

“It has probably been the best day for cricket in this country,” concluded bowler Chris Woakes. “I feel like everything that has happened today is destiny.”

For four years, right from crashing out of the last tournament in the group stages to reaching world No1, England believed the World Cup was their destiny. What they wouldn’t have believed were the circumstances of their crowning glory.

Cricket World Cup: Why England's stars have got a blind spot for trademarks