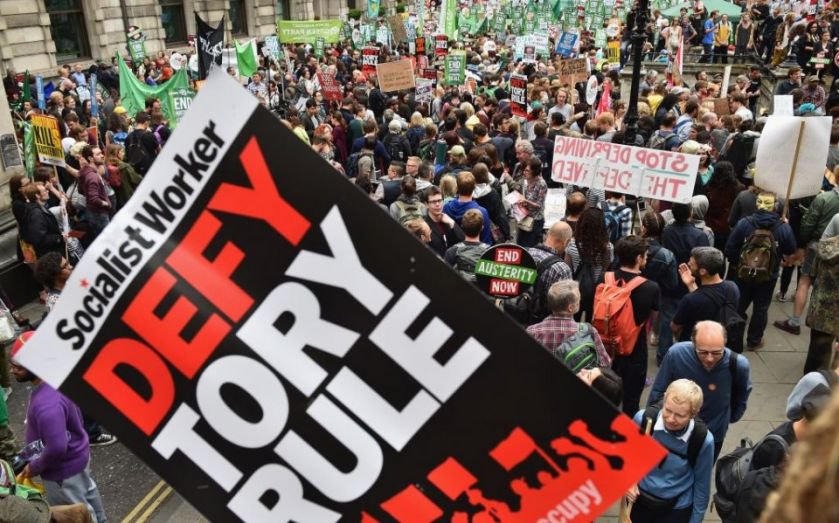 Thousands of people have descended on London to take part in a demonstration against government austerity measures.

Crowds holding banners with slogans such as "get the Tories out", "austerity kills" and "defy Tory rule" took to the streets for the End Austerity Now demonstration.

The march, which had varying estimates for the number of people with some claiming as many as 250,000, was organised by several unions and campaign groups – mainly by a group called the People's Assembly. Despite some reports of expected violence before the demonstration, it remained largely peaceful.

Read more: Here is who will be at the protest

On the Facebook event page for the demonstration, the People's Assembly said: "With the Tories going it alone in government we know exactly what to expect. More nasty, destructive cuts to the things ordinary people care about- the NHS, the welfare state, education and public services."

The demonstration left the Bank of England at 13:00pm (Source: Getty)

Class War was another group at the march (Source: Getty)

Smoke and flares were set off by a small group of protesters (Source: Getty)

However, a separate group called Class War was organising a counter-protest, claiming the main demonstration will fail to bring about any change.

A group of approximately 1,000 people – mainly from the Class War group – broke off from the main demonstration, as smoke bombs and flares were set off.

They headed south towards Lambeth, and were followed by a police presence, before returning to the main group in Westminster.

We'll be assembling the demonstration in the heart of the City of London right on the doorstep of the very people who created the crisis in the first place, the banks and their friends in Westminster.

We demand that the bankers and elite should pay for the crisis and not the vast majority who had nothing to do with it.

Will you be marching to #EndAusterityNow tomorrow at the Bank of England at noon? We'll be there for the NHS! pic.twitter.com/sOjyYkM99J

Michael Sheen, who participated in the demonstration, said:

We must not let ‘austerity measures’ provide a cover for a systematic dismantling of the mechanisms of equality in this country.

The truth is that the financial crisis was caused by the unchecked desires for profit at the expense of responsibility in the financial sector.

Among those in the demonstration were trade unionists, politicians and celebrities (Source: Getty)

Green MP Caroline Lucas and singer Charlotte Church were among those leading the march (Source: Getty)

Thousands of union members took part in the protest, anticipating government policies which will be outlined in the chancellor's emergency budget in three weeks.

Today ordinary people are joining together in their thousands to send a clear message to the new government – no more brutal austerity, senseless cuts and ideological privatisations.

That’s why trade unions will continue to fight for a real alternative based on investment, public ownership and strong rights for working people.

Together we can build a fairer, more equal, more hopeful country.

The demonstration is expected to be policed heavily, amid claims that the Metropolitan Police Service arrested potential protesters before the event.

After the march, the crowd was greeted by speeches from a stage in Westminster Square.

There was a large police presence along the route but the demonstration remained largely peaceful (Source: Getty)

Thousands gathered in Westminster Square after the march (Source: Getty)