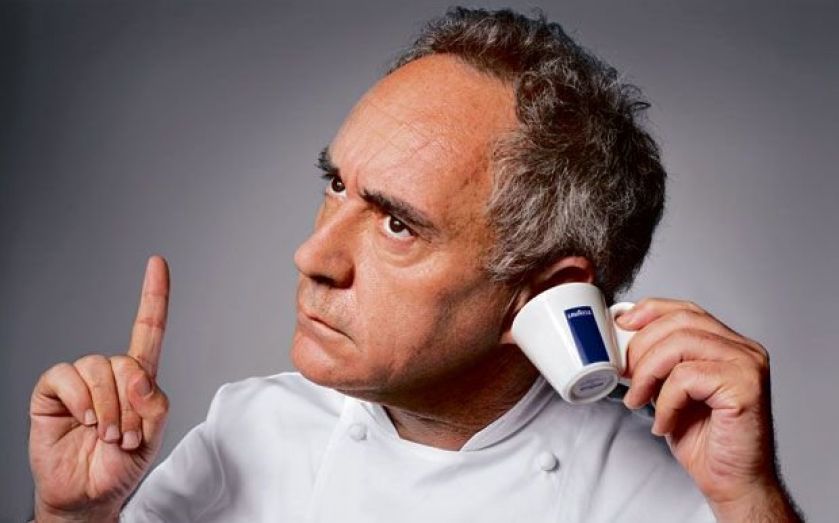 Once upon a time, the language of culinary pretension was French. If a chef wanted to bump up the prices on his menu, all he had to do was add a dash of “jus”, a splash of “vin”, perhaps a little “petit”. French words forged a connection between whatever slop the chef was serving up and the home of “gastronomie”: you could be eating fish and chips in a pub in Croydon, call it “poisson-frites” and suddenly you’re in a Paris brasserie, staring deep into the eyes of an aspiring stage actress as she tenderly recites Rimbaud.
Then Ferran Adrià came along, and food-speak took a technocratic turn. Words like “deconstructed” and “spherified” appeared on menus. Adrià called himself a chef of the “avant-garde”, a “culinary constructivist” and a “modernist”. Food stopped sounding like poetry and acquired the academic ring of cultural theory: in 10 years it went from Rimbaud to Roland Barthes, from ménage à trois to “parsnip three ways”.
But high concept doesn’t have to mean dry. Far from it. During Adrià’s 27 years at elBulli (he started in 1984 when it was a good but unremarkable restaurant in an obscure corner of Catalonia) he made the most convincing argument there has ever been for the applicability of cooking to the category of art-form. Adrià’s elBulli was a strange place of vanishing ravioli, popcorn clouds and mentholated ponds; of edible sand, soil and trees, parmesan foam, mimetic peanuts and liquid olives. Everyone lucky enough to eat there – and you had to be really lucky – agreed: you don’t go to el- Bulli to get your belly filled, you go to have your mind blown.

Without Adrià there’s no “molecular gastronomy”, no Fat Duck, no Pollen Street Social and no Noma. Jason Atherton and Rene Redzepi both worked for him. Heston ate there and watched and learned from afar. Adrià is widely considered to be the greatest chef of his generation, but the most incredible thing about him is that he doesn’t even have a restaurant. Not anymore, anyway.
Adrià closed elBulli in 2011. It had held three Michelin stars for 14 years and was regularly voted the “best restaurant in the world” (even though it only opened for six months of the year). So anxious was he about sustaining the level of creativity that he closed the restaurant that made his name. Well, sort of. El-Bulli no longer serves paying diners but it lives on through the elBulli Foundation, elBulliDNA (a small team of the best chefs in the world), Bullipedia (an online compendium of elBulli recipes and cooking techniques) and elBulli 1846 (a museum and visitor centre).
If that sounds unclear, don’t blame me. Adrià can be difficult to follow: “On 2 June we opened an exhibition which explained three of the new projects: elBulli, elBulli 1846 and Bullipedia. We have also opened elBulli lab, which is a site in Barcelona where we can work on these projects. So you could say that the foundation has already been set. The concept and architectural project is finished for elBulli 1846 and we are starting to work on the narrative side.”
What does he mean “narrative side”? “It’s a story we tell. It’s not the exhibition itself but a process of asking ourselves what cultural places should look like in the future. With technology – especially the internet – the very concept of a cultural space is changing. For example, the great Science Museum in London is fantastic but you don’t have time to see everything. There is so much to cover that it can be confusing. We want to look at how this could be done better, how one can form a cohesive narrative out of the disparate elements.”

“Amber” from the 2008 volume of elBulli 2005-2011. The dish consists of honey jelly encasing a single elderflower floret

Words seem an imperfect medium for Adrià’s ideas. His mind works in hifalutin concepts that crowd and clash when spoken aloud but make total sense on the plate. He has a flare for abstraction that was never refined by a high-level academic education. Born in a Barcelona suburb in 1962, he originally enrolled on a business administration course but left out of boredom aged just 18. He got a job as a dishwasher in a French restaurant in Castelldefels, and it was here that he learned the classic French techniques that set him on his way as a chef. But not before he spent a year partying in Ibiza. He still loves to party but, as with his work, he’s had to learn to take a step back.
“We are cooks, we like to eat a lot, drink a lot. And you have to watch that because it’s impossible to do that every day. Diet is important. If you do go overboard then you have to watch it for a few days. I try to walk for an hour a day; when I travel it can be difficult, but I try. I have to have a clear mind because 99 per cent of the work I do is mental. If I have a few drinks one day, the next day I am not that fresh and I notice it.”
Adrià has a keen interest in many of the workings of the mind, but there’s one he is totally in thrall to: creativity. It’s an obsession, an everpresent preoccupation that he studies, muses over and aphorises about relentlessly. Creativity is at the root of another fixation: the recording and archiving of everything elBulli ever did. The book he’s promoting now, ElBulli 2005-2011, is a seven volume catalogue raisonné of all the dishes he created during the most creative period in elBulli’s history. Many chefs are secretive about their methods. Why does he give his away? “If I am devoted to creativity, I don’t want to repeat myself. I hope that all of your interviews are different. If we have another one in three years, I hope you won’t ask me the same questions.”
He is fond of saying “creativity is not copying”, but if other chefs use his recipes and techniques, aren’t they copying him?
“The word ‘copy’ is very ugly. It means dishonest and unethical. What I want to do is share. I like to learn and for people to share. So if I do it, like when I went to Japan for the first time, Japan shared its culture with me, I copied Japan. There is lots of stuff from Japan in elBulli cuisine. But if I made some sushi tomorrow, it would be silly for me to call it copying.”

Being serious about creativity, he says, was essential for elBulli’s continued success. “People didn’t come to elBulli to eat paella every day, therefore I would say reativity was part of our working method. We had to blaze a trail.”
Is it important for him to blaze a trail? “There are trails and there are superhighways. When I began cooking at elBulli my mission was to make food people liked, and that’s what a restaurant is all about. In 1994 we turned the restaurant into a place where people could live out an experience, where the concept of ‘liking’ meant something different. It could be that we served something you would expect not to like, but then you did like it. We opened up the possibility of provocation, irony and all that.”
How did he have the idea to take food to that new level of experience? “Through thinking. Creativity is always a matter of thinking. You think; sometimes it helps, sometimes it doesn’t. Sometimes brilliant ideas, sometimes not so brilliant ideas. My favourite quote is: ‘creativity is always a matter of thinking’. If you don’t think, there are no ideas. This seems simple but when you drill down into it, you find more questions: how do you think, how do you do it?”
Is he better at thinking than other people? “I never compare myself to anyone, I do things and I manage to continuously improve, but I am not capable of seeing myself in context: I look at a painter or a footballer, and think ‘wow, that’s difficult’. But they look at me and say ‘wow, that’s difficult’. So it depends on the context. It’s like influence: it’s relative. Is Lady Gaga influential? She might not be to world leaders but she is to young people.”
Adrià’s own influence on the top tier of the world’s restaurants is obvious, but is there a limit to how influential you can be when only the top one per cent of the top one per cent of the top one per cent most privileged diners have ever eaten at your restaurant? ElBulli served around 8,000 customers per year, a drop in the ocean.
“That’s a good question. But people, journalists and other restaurants, have already decided that elBulli is one of the most influential restaurants that has ever existed. It’s controversial even to this day, 25 years after the revolution. In life, everything is geared towards everyone wanting to be at the top of the food chain. It’s the same with journalism, there are big media organizations at the top, and many smaller organizations below, which are just as good but are influenced by the bigger organisations… In many ways elBulli’s influence is clear: without it, for example, do you think Masterchef would exist?”
Actually, I think it would. But he’s right to invoke Masterchef as definitive proof of elBulli’s far-reaching impact. You certainly wouldn’t have chancers in the early rounds trying to cover up their lack of skill with flashy talk of “deconstructed fish and chips” and “sausage three ways”. Nor would you have all the teasmoking and water baths that you get in the latter stages. ElBulli the restaurant may be no more, but its spirit lives on in amateur kitchens across the land.
elBulli 2005-2011, published by Phaidon, is out now