Doom Eternal review: Ultra, ultra violence has never been so much fun 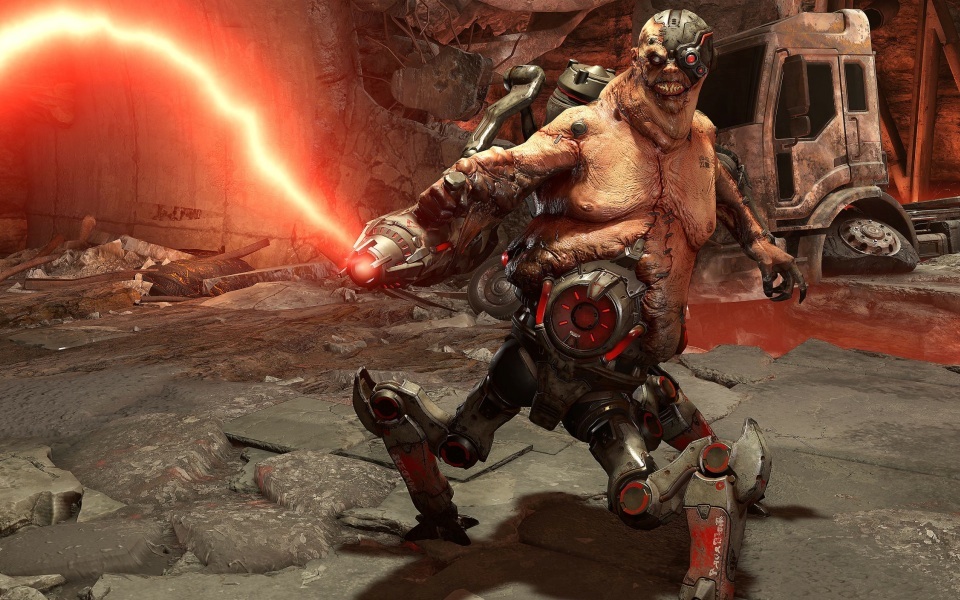 A 2014 study by scientists at Stetson University in Florida suggested that, rather than act as a predictor of violence in real life, violent video games may actually have the opposite effect, making people less likely to carry out acts of aggression. If that’s the case then the law won’t ever have to worry about me, because I have done some truly unspeakable things to demons over the last few days.

I have torn out their still beating hearts and rammed them down their throats. I have broken their bones and used the exposed shards to poke out their eyes. I have smashed them over the head so hard their skulls sank into their torsos.

Doom Eternal, a sequel to Doom 2016 (itself a reboot of 1993 classic Doom, one of the prototypical first person shooters), is very silly. It’s the kind of game that people who don’t play games imagine games are like. It is about saving the world from the literal forces of hell using a shotgun and a chainsaw. And my God it’s fun.

And while Doom Eternal may be incredibly violent, that violence is anything but mindless. I don’t think I’ve ever played a game that’s quite so exhausting. The spawn of hell are relentless – you’re rarely more than a second or two from being machine-gunned to death by a giant brain with scorpion claws. Your only hope of survival, counter-intuitively, is to get right up in those demonic faces, because tearing them asunder with your bare hands – a “glory kill” – provides the sliver of extra health you’ll need for the next encounter.

It’s the same format as Doom 2016, which was a radical reimagining of what Doom could be in the modern era, prizing speed and aggression over strategy and patience. This latest iteration doubles down on that core philosophy. Your character, known as Doomguy, can double-jump, flip across monkey bars and ‘dash’ in mid-air. Traversal is key to survival: if you stop moving, it’s probably because you’re dead. And you will often be dead, because this game is brutally difficult, even on the default setting. Unless you’re using all of the tools at your disposal – guns, fists, flamethrower, grenades – you will simply throw yourself against a wall of monsters like a useless flesh puppet. Over and over and over again.

It took several (often frustrating) hours for this muscle memory to take hold. But when it does, you feel invincible. Combat becomes a frenetic ballet of violence. With no time to think, you act on pure instinct. Your button presses become thrillingly disconnected from your conscious brain; you’ll find yourself sniping parts off an approaching enemy, strafing around it with a plasma rifle that somehow materialised in your hands, unleashing a volley of grenades as it bears down on you, and finally switching to your trusty shotgun to set up that all-important glory kill. Before you’ve fully registered what just happened, you’re already thinning out a crowd of gargoyles with a chaingun.

It’s so finely-tuned that almost every encounter seems to whittle your health to virtually nothing, before you somehow emerge alive and shooting. It’s immensely satisfying.

The arenas, all riddled with tunnels and secret cubby-holes, are varied enough that you never feel like you’re going through the motions. It also looks great, every surface covered in swirling lava or pulsating, intestinal goop. That all of this is achieved without the frame rate dropping below 60fps (on Xbox One X) is borderline witchcraft.

It’s a shame that another addition is a big focus on platforming, with lengthy portions of each level requiring you to double-jump and dash over vast chasms with pin-point precision. It’s like a 3D Celeste, except bad. It brings the momentum to a screeching halt and occasionally made me howl with frustration, which is embarrassing for a grown man.

Doom Eternal is a far longer game than Doom 2016 – more than 20 hours if you scour levels for the many collectibles hidden about the place – and it has a much more involved story. The developer sent me a list of things I’m not allowed to tell you, which is absurd given that it’s all utter nonsense. Having spent close to two dozen hours with it, I still have no idea what was happening most of the time: something about the “mortally challenged” conquering earth, “hell priests” doing naughty things, and ancient defrosted demons.

Oh, and you live on a flying space castle. You even have a bedroom, where you keep items including a guitar made of meat, a strangely endearing collection of figurines and a bunch of pulpy comics. Doomguy is nerd, basically.

Oh, and you live on a flying space castle. You even have a bedroom, where you keep items including a guitar made of meat, a strangely endearing collection of figurines and a bunch of pulpy comics. Doomguy is nerd, basically.

The emphasis on characterisation is reflected in a far deeper network of perks and upgrades, which is initially baffling but eventually vital as you attempt to keep pace with increasingly powerful enemies. You can improve your suit, allowing for quicker traversal or more damaging grenades; modify your weapons; and equip runes that tweak the way Doomguy behaves, giving you more control when jumping, or allowing you to absorb health and armour drops from farther away.

It’s a lot to take in but you soon get the hang of it. In essence, you have to kill things. Lots of things. And those things get bigger – much bigger – as you progress. As you near the end, you feel like the scourge of hell. Doom Eternal makes you into a stone cold killer, your trigger finger working autonomously, your heart-rate constantly hovering somewhere just below ‘take me to hospital, I’m having a heart attack’.

Video games don’t make people violent, but if they did, heaven help the hordes of hell when they come knocking.