Data shows that markets tend to rise in the lead-up to elections when there is a degree of confidence about who the likely winner will be.

Clear-cut general election campaigns tend to have a positive effect on the stock market, history suggests.

Our analysis looked at the final six weeks of the last seven elections and found the FTSE 100rose on three occasions, each time when the result was regarded as fairly certain. This included Labour’s wins in 1997 and 2001 and a Conservative victory in 1987.

When elections have been a close affair, markets have retreated. The FTSE 100 fell more than 8% in the run-up to the 2010 election when a Coalition government was formed.

Early polling suggests the Conservatives hold a significant lead, with between 42-44% of the votes*. But will markets rally between now and polling day on June 8th?

Prime Minister Theresa May called a snap election, much to the surprise of markets. The pound rose to a six-month high. This led to the FTSE 100 having its biggest fall since the Brexit vote, showing again how influential currency strength is.

The table below shows the six-week price change in the FTSE 100 before every election since 1987, which was the first vote after the “Big Bang” deregulation of financial markets ordered by PM Margaret Thatcher in 1986.

How the FTSE has performed 6-weeks before a UK election 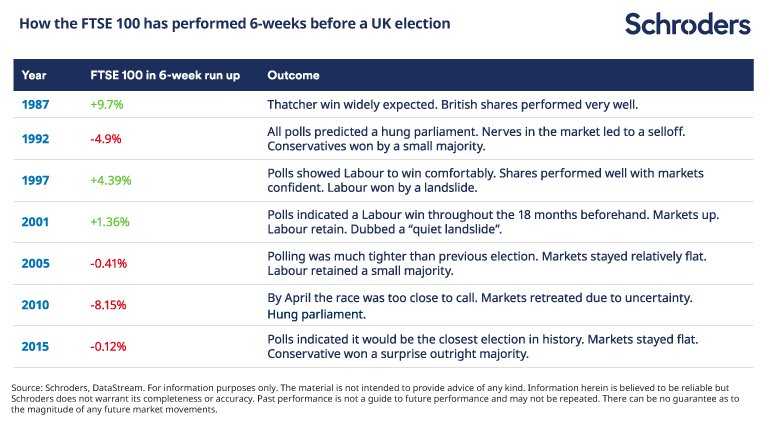 "It makes sense that markets perform well during times of political stability,” said James Rainbow, Co-Head of UK Intermediary Business at Schroders. “It’s useful to know that this has also applied during the run-up to elections over the past 30 years, although there’s no guarantee that will be the case for this election.

“During those previous periods, investors may have moved money elsewhere, maybe into cash. Bonds, which have lower volatility than equities, can also prove popular at times of uncertainty. But long-term investors in the stockmarket should be well used to the idea that they’ll be periods which are a little rocky, especially around political major events.

“The best option is to remember your original reasons for investment and stick to the plan.”

Investors looking to speculate on polling results should note previous surprise results. The 2015 election offers a cautionary tale. Polls indicated it would be the closest election in history, and a hung Parliament.

Markets only finished the six-week period slightly down. Polls were proven completely wrong also, with the Conservatives achieving an outright majority.

Important UK data such as CPI (inflation) and PMI (health of the manufacturing sector) are also expected, which will be digested by investors.

This means the strength of the pound heavily influences the level of the FTSE, as detailed in our "How currencies move stockmarkets article". It means that a rise in sterling when the election was announced, pushed down the value of the FTSE 100.

*Based on BBC Polls of Polls, 18th April 2017. Polls of Polls is an average of most recent polls from YouGov, Opinium, CornRes and ICM. Based on voting intention for the whole of the UK.